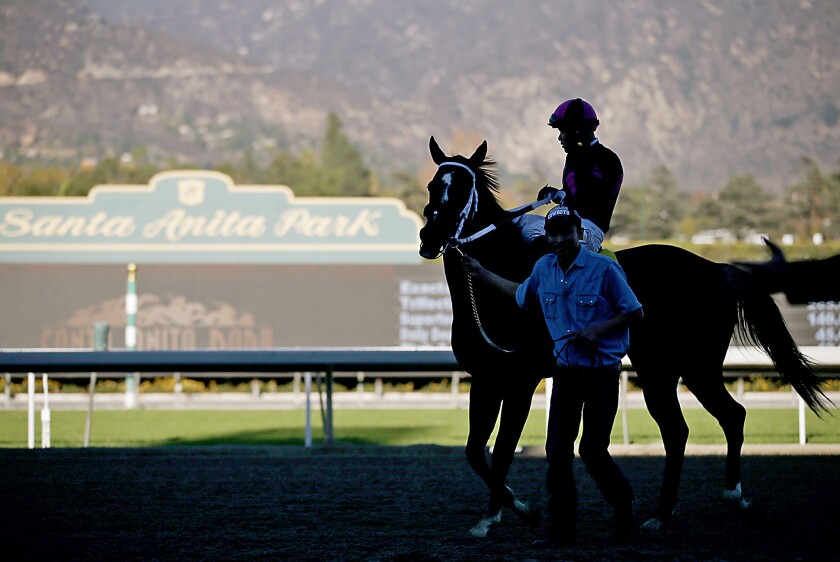 Santa Anita, under unprecedented scrutiny after last year’s spate of horse deaths, had two horses die over the last two days of racing. There have been four deaths since the race meet was designated to start Dec. 26.

Harliss, a 6-year-old gelding trained by Val Brinkerhoff, was pulled up during the gallop out after the finish of the seventh race Friday. He was diagnosed with a fractured right front ankle and was euthanized. He had finished seventh in the eight-horse $25,000 waiver claiming race over 5½ furlongs on the turf.

Uncontainable, a 5-year-old gelding trained by Peter Miller, was pulled up mid-stretch Saturday in a California-bred allowance/optional claiming race of 1 1/8 miles on the turf. He was also diagnosed as having a broken right front ankle and was euthanized.

Despite the two deaths, Santa Anita has had two fewer deaths than it did at this point last year. It wasn’t until Feb. 23 of last year, after the Los Angeles Times first reported the increase in fatalities after the 18th death, that it became a national story and Santa Anita was forced to close for more than three weeks.

The deaths this year have been different in that three have been on the turf and one on a training track under nonworkout conditions. There have been no deaths on the main dirt surface, which was the subject of most of the attention last year. Three of last year’s initial six deaths were on the dirt and three on turf.

Harliss had a lifetime record of one win in 12 starts. The only victory came in her 11th start, a maiden claiming race at Los Alamitos. In his last race he stayed near the lead before weakening in the last furlong. He was pulled up near the clubhouse turn after the race and was vanned off.

Uncontainable had won three of his 11 races, but all at the claiming level. This was his first step up to an allowance field. He ran at the back of the pack the entire race and did not appear to be under a drive when he took what was thought to be a bad step.

Santa Anita will race two more days before being off until Friday.