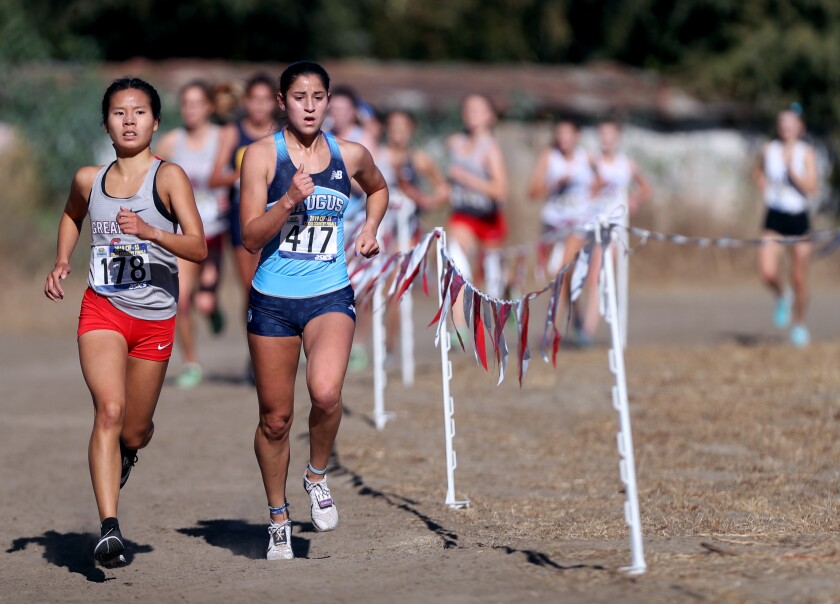 Before the races began in the Southern Section cross-country finals on Saturday, Saugus High coach Rene Paragas had no clue what he might see.

He certainly had no expectations of a return to normalcy after the tragic school shooting that took place last week.

Paragas said that students were not in class this week, and practices were optional. Counseling was available as the school begins the grieving process.

After receiving a bye in the CIF preliminaries, the Centurions returned to racing. Making it to the starting line would provide healing and a chance to move forward.

“We’re trying to move on, and at the same time, we’re not trying to forget,” Paragas said before the start of the event.

The Centurions had a legion of supporters, as light blue “Saugus Strong” shirts were seen throughout the Riverside City Cross-Country Course.

Our hearts are with the Saugus Community as they compete here at the CIF-SS FORD Cross Country Championships.#CIFSSCrossCountry 🎽 | @SoCaliFord pic.twitter.com/ggvvjdXp8h

Fredericks, a junior who finished third with a time of 17 minutes 33.1 seconds, took in the moment with her teammates immediately following the race. Among what she called “overwhelming support,” she said the closeness of the cross-country program has been her greatest ally.

“I just surrounded myself with people I love, which was my team,” Fredericks said of her personal approach to dealing with the recent tragedy. “We just grieved together, which made it a lot more bearable.”

As for the message she has taken from the Saugus Strong movement, Fredericks said, “I think it’s trying to say that whatever is thrown at us, we’re going to come back even stronger and come back as a team.”

Paragas said that support had come from “far and wide.” It included the printing of shirts, donations and care packages that came with hand-written notes.

Newbury Park, the top-ranked boys’ team in the state for Division II, broke the course record with a team time of 1 hour 13 minutes 21 seconds, spearheaded by Nico Young’s record-setting run of 13:54.1.

Young, the back-to-back Division 2 champion, offered words of encouragement for Saugus, too.

“I’ve never experienced that. It’s extremely hard. I would just say, ‘You have to keep going.’ It doesn’t even compare to what happened to us last year, but a fire came right next to our school,” Young said, recalling the Woolsey fire. “We had to just focus on what we were doing. We just had to push through that, and it was really hard.”

Course records for everybody here today!!Nico Young of Newbury Park beat his own record of 14:24 going 13:54 😱😱Team mate Jace Aschbrenner also below Nico’s previous record making them 1 and 2 in course history!!#CIFSSCrossCountry 🎽 | @SoCaliFord pic.twitter.com/rhjTrCgHDg

Panthers coach Sean Brosnan said repeating as CIF champion brings his team a step closer to its ultimate goal of returning to and winning the Nike Cross Nationals. He praised the discipline of his team.

“No one blinked. No one cared, and they went out there and did everything that I asked. I’m super proud of these guys, and this has been an honor so far. We have two more weeks to make it happen.”

Riverside North’s Mackenzie Browne won the Division 2 girls’ final in 16:53.7. The freshman was the lone girl to break 17 minutes at the meet.