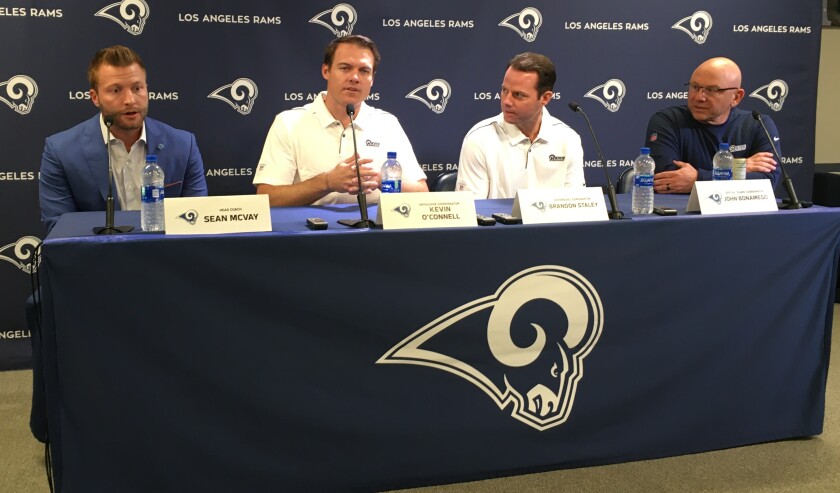 As he addressed reporters during a news conference Wednesday, Rams coach Sean McVay sat at the far right of a table, his three new coordinators to his left.

But McVay’s decision to overhaul his coaching staff has left him front and center — perhaps more than ever — as the Rams attempt to rebound from a disappointing 2019 season.

After missing the playoffs for the first time in his three-year tenure, McVay did not retain veteran defensive coordinator Wade Phillips. Veteran special-teams coordinator John Fassel left to join the Dallas Cowboys staff.

In 2017, the experienced coordinators enabled the then 30-year-old McVay to hit the ground running as the youngest coach in modern NFL history.

Only one of the Rams’ 21 coaches — assistant offensive line coach Andy Dickerson — predates the now 34-year-old McVay with a franchise that wants to put behind 2019 and gear up for 2020 in new SoFi Stadium.

“I’m excited and motivated and, really, I would say more rejuvenated and reinvigorated than I’ve ever been since I first got here,” said McVay, the recipient of a contract extension before last season.

McVay was not as enthusiastic about sharing specifics behind his reasoning to not renew Phillips’ contract and not retain running backs coach Skip Peete.

Phillips, 72, began coaching in the NFL in 1976. This past season, the Rams ranked 13th in total defense, 12th in pass defense, 19th in rushing defense and 17th in scoring defense.

Asked why he did not retain Phillips, McVay expressed appreciation and respect for Phillips’ work but said, “It really wasn’t anything in particular.”

He was no more specific when asked about Peete, who has been replaced by Thomas Brown.

“We decided to go out and move in a different direction,” McVay said.

Staley coached outside linebackers with the Chicago Bears and Denver Broncos under Vic Fangio. The Bears shut down the Rams in 2018, and McVay has long admired Fangio’s approach.

Staley impressed during an interview with McVay.

“When you talk football — I’d like to think that I love football as much as anybody — you’re sitting there and you’re thinking, ‘This guy might be sicker than I am,’ ” McVay said, laughing.

Staley said he was mindful and respectful of Phillips’ legacy after coaching with the Broncos, a team Phillips helped lead to a Super Bowl victory. Phillips and Fangio both favor a 3-4 scheme.

“There will be a lot of carryover,” Staley said, when asked whether he would install a 3-4 or a 4-3, adding, “There’s none of those wholesale changes that happen at other places.

“So, I think there will be a comfort level there with the players knowing they are going to be doing a lot of the same things, but maybe schematically, situationally, technically, there may be some nuances.”

O’Connell was the Washington Redskins offensive coordinator last season and became the play-caller when coach Jay Gruden was fired after an 0-5 start. Under McVay, O’Connell will be in a non-play-calling role similar to the one Matt LaFleur filled on the 2017 staff.

As part of the staff restructure, Shane Waldron remains the pass-game coordinator but is no longer the quarterbacks coach. There is no titled quarterbacks coach, but O’Connell will assume that role in most instances for Jared Goff, McVay said.

“This is a place that when this opportunity came about, you look at, you can’t get here fast enough just because of the type of role, the type of coaches,” O’Connell said. “Obviously the quarterback had a lot to do with it for me as well.”

Bonamego has worked for five NFL teams, most recently the Detroit Lions last season. He inherits units that include punter Johnny Hekker and long-snapper Jake McQuaide. Kicker Greg Zuerlein is a pending free agent. McQuaide played all but one of his nine seasons under Fassel. Hekker has not played for any other special-teams coach.

“Just learning them, their routine, them learning me, communication,” Bonamego said when asked about the challenge. “I’ve already done my homework on those guys. ... Those guys are like any other position. They want to be coached, they want to get better.”