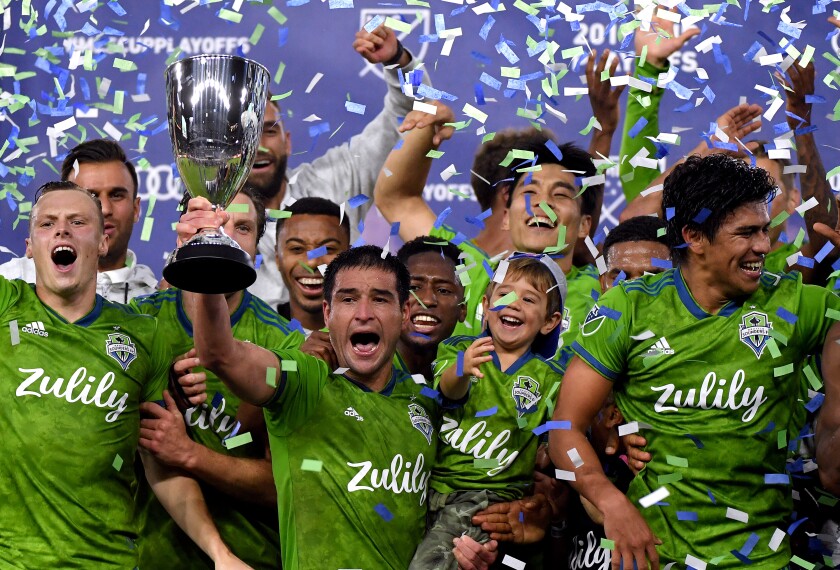 Sunday’s MLS Cup will be the third in four years for Seattle Sounders general manager Garth Lagerwey. Before that, he took Real Salt Lake to two title games in five seasons, making him one of the most successful executives in league history.

There’s a caveat to all that, though, because while Lagerwey is going for his third championship ring Sunday, his teams have never won a Supporters’ Shield, never finished higher than second in the conference standings and won more than 17 games in the regular season just once.

But they have been good when it counted most.

“The rules say that the champion is the MLS Cup winner,” Lagerwey said. “Turns out there seems to be a lot of logic in building a team that can win playoff games and win titles.”

Not just logic but precedent. LAFC posted the best regular-season record in league history this year, yet when Seattle knocked them out of the playoffs in the Western Conference final, it marked the 13th time in 17 seasons the Supporters’ Shield winner failed to win the MLS Cup.

And soccer isn’t the only sport where this happens. Just twice this century has an NFL team finished the same season with both the best regular-season record and the Super Bowl trophy. It has happened only three times in the NHL. And Lagerwey, a longtime baseball fan, remembers a time when the Atlanta Braves won 11 consecutive division titles and just one World Series.

So he has concentrated on winning games in the fall rather than the summer.

“It’s pretty simple stuff,” he said. “You focus on trying to have some experience and trying to have really good players down the middle. If you’re able to keep to those two concepts, then it turns out in big games those players will have the most influence on that outcome.”

Let other teams have the superstars. While Toronto is paying designated players Jozy Altidore, Michael Bradley and Alejandro Pozuelo more than $16.6 million combined, the Sounders have just two players — midfielder Nicolas Lodeiro and forward Raul Ruidiaz — with base salaries of more than $1 million.

Let other teams build for the future. While LAFC started five players younger than 23 in the conference final, Seattle used five players who are over 30.

“It’s really important that we win now,” Lagerwey said. “We have shoved all our chips into the middle of the table.”

Toronto FC, Sunday’s MLS Cup opponent, is in similar circumstances. This will be third time in four years Toronto and Seattle have met in the title game and the Canadians, who have four starters older than 30, had to scrape their way to the final, going unbeaten in their final 10 games to squeak into the playoffs, then running the table once they got there.

So is success in MLS really a matter of delicate planning, age and experience all coming together at the same time? Or is it parity, the result of league rules that limit spending and force teams to continually churn their rosters?

Turns out it might be a little of both, with each of the league’s three main eras marked by dominant teams that faded.

D.C. United played in the first four MLS Cups, winning three of them; it has advanced past the conference just once since. The New England Revolution reached four title games between 2002-07; the team has lost more games than it has won since. Then, the Galaxy won three titles in four seasons beginning in 2011; they haven’t played in a conference final since.

Now, Seattle and Toronto are meeting for the third time in four years.

“Do I think we can get another year out of this group? Potentially,” Lagerwey said. “But are we closer to the end than the beginning? Yeah.”

New England coach Bruce Arena, who won a league-record five titles with D.C. United and the Galaxy, says experience is a big factor in determining a team’s success, especially in the playoffs.

“Teams like Toronto and Seattle are very experienced. They [can] go in and get those kind of results,” he said.

But, he cautioned, “There’s no formula. It’s going to change. Next year, the league is going to look different than it did this year.”

Markets play a big part in that. The Galaxy and LAFC, based in a crowded sports landscape dominated by superstars such as LeBron James, Mike Trout and Clayton Kershaw, will always need a big-name player to compete. Portland, Kansas City and Atlanta, which have all won MLS titles in recent years, don’t face those same pressures.

“Every market’s going to be a little bit different. So everything is going to be unique,” Arena said. “That’s kind of the beautiful part of MLS. It’s got great variety.”

The fact the old model is fading is evidenced by the fact this season was the first in which the two conference finals did not feature one of the original 10 MLS teams. And seven of the eight semifinals were expansion teams.

“It’s a club-specific model. And clubs will chose to spend differently,” LAFC general manager John Thorrington said. “What you’re starting to see more and more of in MLS is clear identities of different clubs.”

So while LAFC and Atlanta, last year’s champion, built their teams around young, dynamic Latin Americans, Toronto’s roster is older and more domestic.

But there is winning and losing. And sometimes no amount of planning or spending can predict one or prevent the other.

“It’s good to keep that in mind because it keeps you humble. But I would like to think that there’s more at work here than the cyclical nature of things and pure luck.”