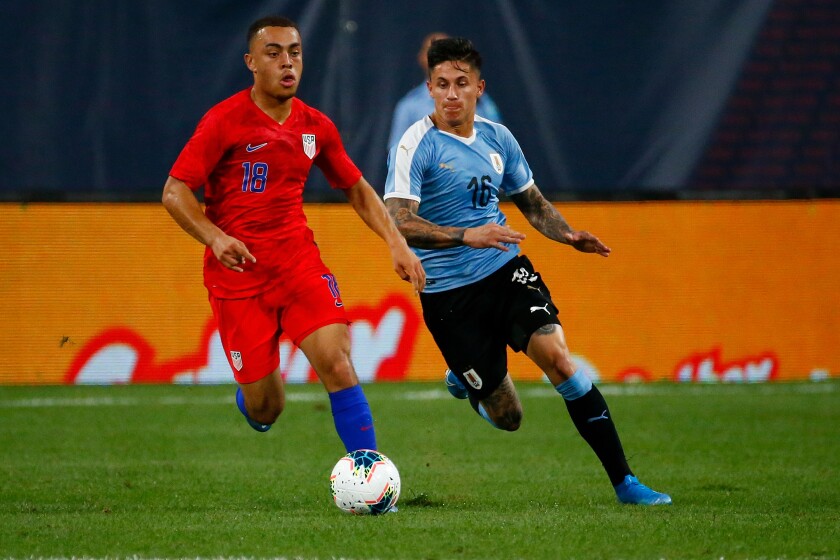 Now that Dutch American teenager Sergiño Dest has chosen to continue his international soccer career with the U.S., he was asked a question before Wednesday’s training session with his new teammates: Can he sing “The Star-Spangled Banner”?

“Now?” he responded in both shock and surprise. “I can’t sing. I just know the lyrics.”

That will have to be good enough because with Dest, 19, who was born in the Netherlands to a U.S. serviceman father, the national team has added more shine to a golden generation of youth that already includes Christian Pulisic, Timothy Weah, Weston McKennie and Josh Sargent, none of whom is older than 21.

“Which is great for the program,” said Earnie Stewart, U.S. Soccer’s sporting director. “He’s a very talented player playing at a really high level. He’s part of our future.”

First, however, the present. Dest, who had been the subject of a pitched tug-of-war between the U.S. and Dutch federations, must appear in a competitive game at the senior level to tie himself to the American side. That figures to happen Friday, when the U.S. faces Canada in a must-win CONCACAF Nations League game.

Neither Dest nor Stewart could have said that three weeks ago. Although Dest had played more than a dozen times for U.S. age-group national teams and in two fall friendlies with the senior team, he turned down an invitation to take part in last month’s Nations League games, uncertain over whether he wanted to commit to the U.S. or the Netherlands.

“Everybody was pulling at me. Everybody wanted to know an answer,” the soft-spoken Dest said.

“It’s a hard decision because you’re from both [countries]. But you have to make decisions in life so I made one. Now I have to make sure that I made a good one.”

An outside back who has played on both sides for Ajax of the Dutch Eredivisie, Dest fills a position of need for the U.S. He is quick, technically sound and extremely comfortable on the ball for a player his age.

But he has also won praise for his confidence and humility, especially his admission that there are several parts of his game he needs to work on.

“We’re going to make sure that he develops himself,” said Stewart, who was also born in Holland, about 60 miles southeast of Dest’s hometown, to a Dutch mother and a U.S. serviceman father. He committed to the U.S. national team at 21 and went on to play in 101 games and three World Cups before earning induction into the national soccer hall of fame.

But while Stewart spent part of his childhood in Southern California and attended an American school in the Netherlands, where he pledged allegiance to the U.S. flag every morning, Dest’s first trip to the U.S. was a vacation to New York City when he was 13.

Still, Stewart understood the decision he was wrestling with.

“There’s heritage there. There’s feelings. You can’t replicate or take away what happened in all those years,” he said.

So Stewart and U.S. coach Gregg Berhalter made sure not to pressure Dest, relying instead on his experience playing for the U.S. in U-17 and U-20 World Cups and in two friendlies with the senior team last month.

The strategy paid off.

“All the time I have spent with the U.S., that helped me a lot. That might be the biggest influence on my decision,” said Dest, who is the 69th dual national and 11th son of an American serviceman to play for the national team since 2008.

Dest said his parents gave him space as well although, unlike Stewart, Dest says his family would have been happy with whatever side he chose.

“They were like, ‘OK, if you want to make that decision it’s your life’,” he said. “They were happy for me because I made a decision.”

Now he has a chance to help decide his new team’s future in the first CONCACAF Nations League. After last month’s loss to Canada, the first for the U.S. in 34 years, Berhalter’s team must win Friday’s rematch, beat Cuba next week and make up a four-goal differential with Canada to win the group and advance to the tournament semifinals.

And they have to do all that without Pulisic, their top playmaker; Zack Steffen, their starting goalkeeper; and Michael Bradley, their captain. All are out with injury.

“The pressure’s there,” forward Paul Arriola said. “We obviously put ourselves in this situation and as a team, collectively, we’re going to take ourselves out.

“When you miss some of your best players it’s a different mentality, right?”

And Dest certainly brings a different mentality. Before and after his five-minute session with the media Wednesday, he quietly approached each reporter and shook his or her hand. That’s a very Dutch gesture, Stewart said.

On Friday, before his first competitive game with the U.S., Dest will make a very American gesture when he puts his hand over his heart and recites – but doesn’t sing – the national anthem.