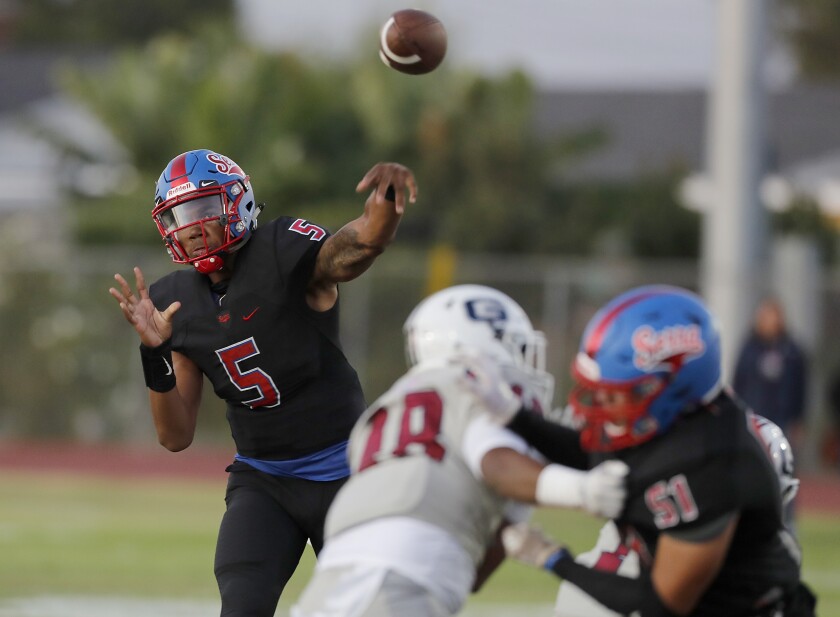 The Gardena Serra trio of quarterback Doug Brumfield, receiver Ronald Gilliam and defensive back Justin Pinkney had it mapped out. They came to separate decisions to continue being a collective. Each committed to continue their football career playing for coach Tony Sanchez at Nevada-Las Vegas during five weeks early in the summer.

“We have all been together since we were little, so I was like it would be a good connection if we all went there together and stuff like that and played as a team like in high school,” Pinkney said.

But Sanchez was fired in late November, leaving uncertainty for all the prospects committed to UNLV. Oregon offensive coordinator Marcus Arroyo was hired as the Rebels new head coach about two weeks later. He had less than a week to solidify a recruiting class before the early signing period began.

Arroyo didn’t rush to evaluate all the committed prospects and try to put on a full-court press for some recruits that were high on the previous coaching staff’s recruiting board. He chose a different path.

“The new head coach, he didn’t allow none of us to sign early,” Pinkney said. “He said he wants to see all of us in person, like on our visit and everything.”

Arroyo didn’t pull any offers or renege on scholarships with any of those who committed, but he hit the pause button. He is remaining with Oregon through the Rose Bowl. UNLV didn’t sign anyone in the early period, shifting the focus to the signing period that begins in February.

The news caught many of the Rebels’ commits off guard, including the three Cavaliers.

“When he told me, I was like, ‘Why?’ But he explained it to me,” Gilliam said. “I get what he’s saying, so I was like I’d rather meet him first before signing, so I can get to know him more.”

Pinkney had planned to take his official visit on the final weekend before the early signing period, sign on Dec. 18 and enroll in January.

“I was curious. I was iffy about it because I wasn’t sure what was going on,” the 5-foot-11, 170-pound cornerback said. “They weren’t really telling me things with everything that was going on, but when [Arroyo] called me himself and told me, I felt more confident about the commitment. He said he wanted to get the Rose Bowl out of the way first and then have us come up for a visit.”

Pinkney and Gilliam said they intend to stick to the plan after speaking with Arroyo. Brumfield told the Las Vegas Review-Journal that he “can’t wait” to get to UNLV and “hopefully make an immediate impact.” The Serra trio plans to sign in February.

Oregon extended a scholarship offer to Gilliam the summer before his junior year, so he has some previous experience with Arroyo. He met and talked with Arroyo in the past and has paid attention to how the Ducks’ offense has performed, including being No. 15 in the nation averaging 35.9 points per game this year.

“I was happy [to hear Arroyo was hired] because I like how he runs his offense,” Gilliam said. “He had Oregon over there looking good, so I was excited. I already knew he was going to come with some real stuff. I think my future is bright going in.”

UNLV had five senior and six junior defensive backs on its roster this season. The Rebels return only two starters in the defensive backfield and both will be juniors next season. Pinkney sees it as an opportunity.

“That’ll give me a chance to go and play and start early,” he said. “When they told me all the seniors are leaving, that gave me a goal, like, oh, yeah, I should commit there and stick with them.”