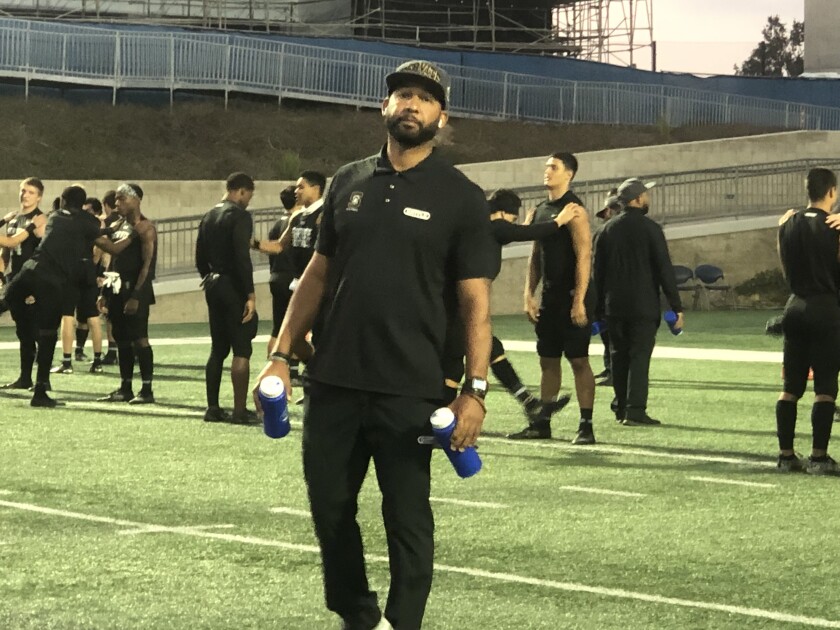 When Troy Thomas returned for his second stint as football coach at Anaheim Servite last season, one of the smartest moves he made was hiring Darnell Arceneaux as offensive coordinator. He coached quarterback Marcus Mariota at Honolulu Saint Louis and was entrusted with recharging the Friars’ offense.

“He’s a perfect match for the kids,” Thomas said.

Servite is making real strides, particularly on offense. With sophomore quarterback Noah Fifita passing for 265 yards and four touchdowns, the Friars (5-3, 1-2) moved into position to claim third place in the Trinity League after a 34-21 victory over San Juan Capistrano JSerra on Thursday night.

“This was a big win for our program,” Thomas said.

Servite had played No. 1 Santa Ana Mater Dei and No. 2 Bellflower St. John Bosco in the last two weeks. The Friars didn’t regress -- they got better. They came up with two interceptions and recovered a fumbled punt to inflict a crushing defeat on the Lions (5-3, 1-2). One of the most impressive players continues to be 6-foot-4 sophomore receiver Tetairoa McMillan. He had 10 receptions for 74 yards and one touchdown, a one-handed catch in the end zone. Colleges will be lining up to recruit him because of his athleticism and hands.

“He’s very good and is only going to get bigger and stronger,” Thomas said.

I’m sorry but this sophomore is the best I’ve seen this season and it’s not close. Servite’s Tetairoa McMillan. pic.twitter.com/Mwd1QGsQGP

Servite put together a more than six-minute drive in the fourth quarter that finished with a Kyle Bandy 26-yard touchdown reception after JSerra had pulled within 28-21 on a one-yard touchdown run by General Booty.

As Servite’s offense gains attention, Arceneaux is going to gain quite a following but he seems happy at Servite.

Said McMillan: “He’s amazing. His play calling is diverse. He tries to create different opportunities for all of us.”

Servite took a 28-14 halftime after a one-yard touchdown run by Fifita on fourth and goal with seven seconds left. Fifita had touchdown passes of 21 yards to Zedakiah Centers, two yards to McMillan and three yards to Damien Moun.

Once down 14-0, JSerra briefly tied the game on a 74-yard touchdown run by Sammy Green and a blocked punt by New Zealand Williams that turned into a touchdown by Max Carvalho.

About the only major issue for Servite continues to be special teams. The Friars gave up a blocked punt that led to a touchdown, missed an extra point and short field goal.

But the progress being made is real.