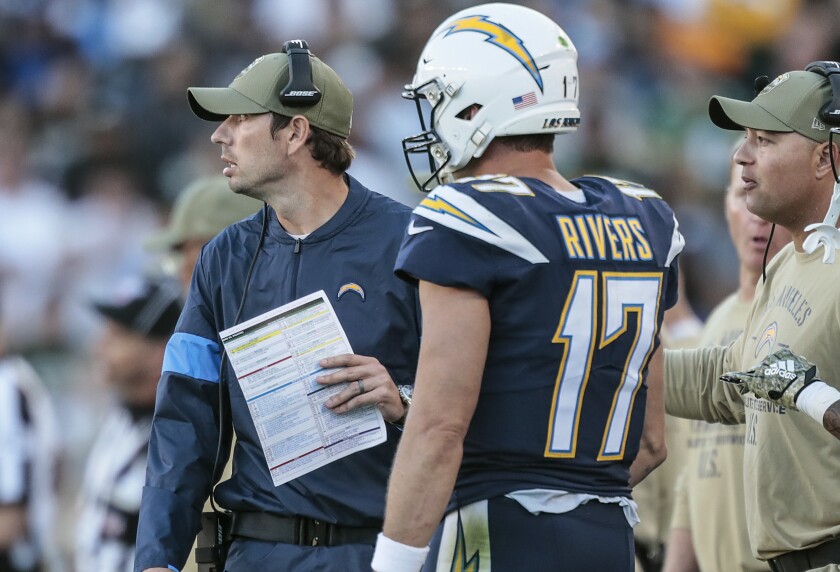 Shane Steichen decided to stand on the sideline for his first game as an NFL play-caller.

Only Steichen didn’t stand. At least not still.

He never stopped moving, pacing up and down as his offense moved downfield and amassed 442 yards in a 26-11 victory over Green Bay.

“Shane did an outstanding job,” Chargers coach Anthony Lynn said. “I thought he was aggressive when he needed to be aggressive. He did a good job establishing the run when he had to.”

Steichen, 34, was the team’s quarterbacks coach until Ken Whisenhunt was fired as offensive coordinator last week.

Promoted to play-caller, Steichen was given the option to coach from the sideline or the press box, and he opted for the former.

The offense flourished as it hadn’t in weeks, the Chargers stalling repeatedly in the red zone but still scoring on six of their first seven possessions.

“He prepared well all week,” Lynn said. “The players have a lot of confidence in him. The whole offensive coaching staff did an outstanding job.”

Asked why Steichen inspires confidence, Lynn added: “His work ethic, his energy, his passion for this game. He knows what he’s doing. He’s a good, young coach. He’s going to be around for a long time.”

Under Steichen’s guidance, the Chargers re-established a running attack that had been missing. They finished with 159 yards on 38 attempts, one week after rushing only 12 times for 36 yards in a victory at Chicago.

The offense also played with more pace, often times not huddling, something Lynn said was a point of emphasis leading into Sunday.

“If you looked at when we moved the ball down the field and have been the most efficient, a lot of times, it was when we were in our no-huddle offense,” he said. “So we decided to go with that a little bit today.”

For the first time since Melvin Gordon returned from his contract holdout, the Chargers looked like an offense capable of mixing the run with the pass as 11 of their 24 first downs came on the ground.

In the fourth quarter, they were able to grind away some valuable time, leaving Green Bay quarterback Aaron Rodgers stuck on the sideline. The Chargers held the ball for nearly 12 more minutes than the Packers did.

“I liked the rhythm the offensive line was in,” Lynn said. “They did a heck of a job of coming off and creating run lanes for those backs. And they gained a yard. Any time the offensive line gains a yard, the backs should get a yard.

“They knew the importance of establishing the run in this game. You have to control the time of possession because Aaron Rodgers is just too good to give him too much time.”

Michael Badgley looked good after the game too, leaving the locker room in a blue suit that featured an interesting jacket. The lining was decorated all over with the words “Money Badger” and small badgers carrying bags of money.

That’s the nickname that emerged on line among Badgley fans last season as the then-rookie kicker took over and stabilized a position that had been in turmoil for the Chargers.

He returned Sunday after missing the first eight games of the season because of a groin injury.

“Just having that feeling in my head that I knew I was playing and getting to contribute was awesome,” Badgley said. “It felt like Day 1 again.”

The negative was his fifth attempt, a 44-yard kick, that sailed wide left in the fourth quarter.

Badgley has embraced his popularity among the fans and recently received a trademark on the term, “Money Badger.”

He acknowledged after the game that he has no idea what having the trademark actually means. The story of his legal filing was first reported by ESPN on Sunday morning.

“My agency sought out an opportunity,” Badgley said. “I wasn’t really sure about it. But they just said, ‘Let’s take this and run with it.’ Of all days for it to come out. If [I] go out there and lay an egg, it’s like, ‘Well, you’re not really the Money Badger.’ ”

In his third season and 34th NFL game, wide receiver Mike Williams had the first 100-yard day of his career.

Williams, a first-round pick in 2017, finished with three catches for 111 yards. Taken with the No. 7 overall pick, he was slowed by injuries as a rookie but has played in 24 of 25 games over the past two seasons.

“I am surprised it took this long,” Williams said. “I don’t think I ever went three years without a 100-yard game before. That’s football, though, I guess.”

One of the few lowlights for the Chargers defense was a 15-yard unnecessary roughness penalty on safety Rayshawn Jenkins. The call allowed the Packers to convert a third down in the second quarter after the Chargers had appeared to stop them.

Jenkins became entangled with Green Bay center Corey Linsley and was the one penalized.

“He was just talking the whole game,” Jenkins said. “As I was walking off the field, he got in my face. We were going at each other and he grabbed my facemask. Once he did that, I had to put my hands on him.”

The penalty ended up not costing the Chargers as they eventually forced the Packers to punt.

Sam Tevi left the game because of a knee injury in the first half and did not return. He was replaced at right tackle by Trent Scott.

Linebacker Denzel Perryman also was knocked out of the game because a knee injury and did not return.