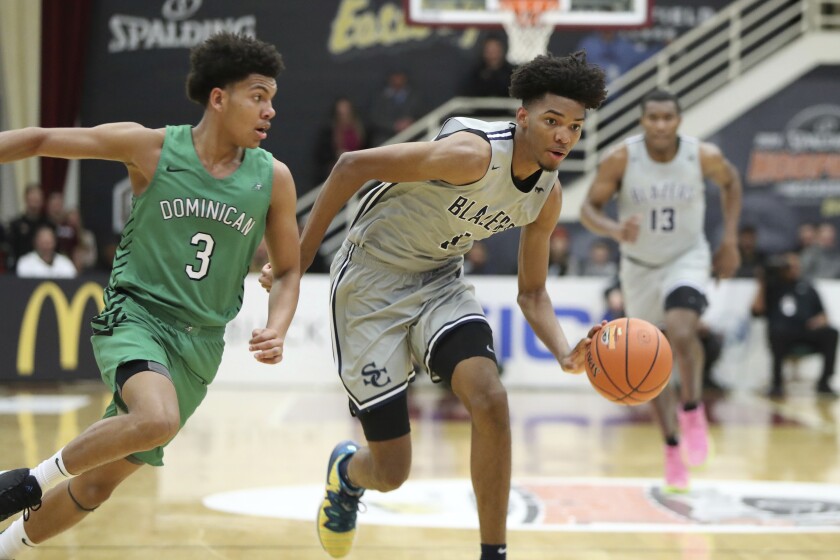 With less than a month left in the high school basketball regular season, the competition to be No. 1 in Southern California remains up for grab. That’s the message left on Monday when three top teams _ Sierra Canyon, Rancho Christian and Santa Ana Mater Dei _ all went down to defeat competing at the HoopHall Classic in Springfield, Mass.

Yes, they lost to outstanding national teams, but it provides evidence that none will be considered unbeatable when the Southern Section releases its eight teams for the Open Division playoffs next month.

Sierra Canyon fell to 18-3 on the season in losing to Va. Paul VI 70-62. Duke-bound Jeremy Roach showed once again that the Trailblazers have problems when facing good guards. He had 16 points and seven assists. BJ Boston led Sierra Canyon with 20 points and Ziaire Williams added 15 points. Sierra Canyon returns home to face Windward on Thursday in an important Gold Coast League game.

The good news for all three teams is that they picked up valuable experience playing top opponents. But all three have questions as they return to finish out the regular season and then begin the month-long section, regional and state playoffs. It opens the way for Corona Centennial and Etiwanda, among others, to contend for the No. 1 spot. Centennial has a win over Rancho Christian and Etiwanda lost by four points to Sierra Canyon.