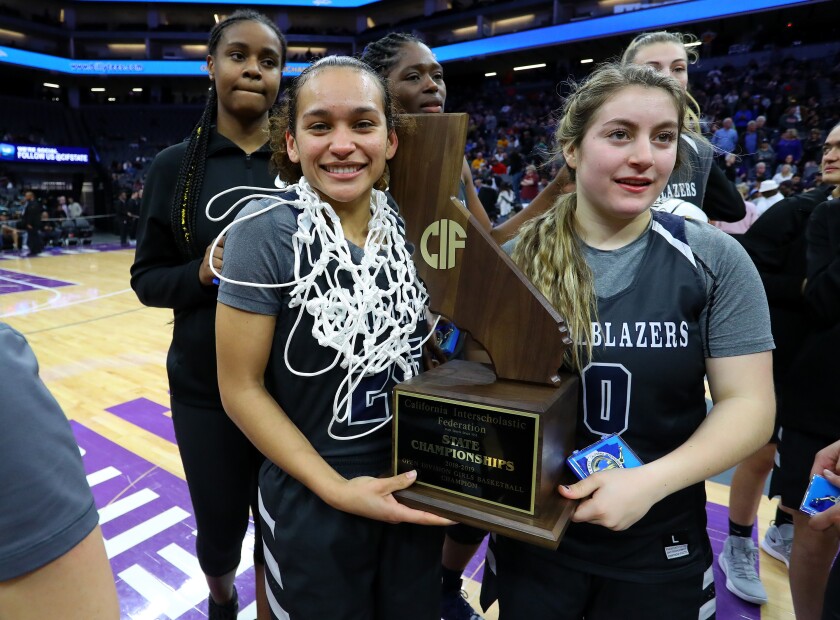 It’s 6:30 a.m. on a school day. The sounds of basketballs being dribbled and players shouting “ball” echo throughout the Chatsworth Sierra Canyon High gymnasium.

While others were waking up, brushing their teeth or sipping coffee, the defending state champion girls’ basketball team from Sierra Canyon was practicing this week in preparation for another deep run in this upcoming season’s playoffs. With players headed to Texas, Duke and Boise State, the Trailblazers have big plans.

“After winning last year, we know what it feels like to be state champions and I think it will motivate us even more to get us back there,” Duke-bound guard Vanessa De Jesus said.

It’s 630 am. Are you asleep? Are you brushing your teeth? Are you making coffee? The No. 1 Sierra Canyon girls basketball team is at practice. pic.twitter.com/lQL4dpjtsA

“We’ve always tried to play up tempo,” Komaki said, “but this year we’re going to try to push even more than normal.”

The scary part is that Komaki thinks her top three players have gotten better. “That’s insane,” she said.

Chevalier, the daughter of Sierra Canyon boys’ coach Andre Chevalier, is seemingly never seen without a basketball in her hands. “I want to improve every aspect of my game,” she said. “I’m focusing on the consistency of my shot, especially from three range.”

League rival Los Angeles Windward won the Southern Section Open Division title last season when it defeated the Trailblazers behind Charisma Osborne (now at UCLA), but the Wildcats must make a transition to relying on others to keep up with Sierra Canyon. McKayla Williams, a Gonzaga signee, returns, and the Wildcats have added a highly regarded freshman in Juju Watkins.

Corona Santiago has one of the region’s best young players in sophomore point guard Londynn Jones, who averaged 26.1 points as a freshman.

It’s still going to come down to taking Sierra Canyon out of its comfort zone.

“I think we can be very fast and if we get comfortable in our fast-paced offense, we’re going to be very hard to stop,” Chevalier said.