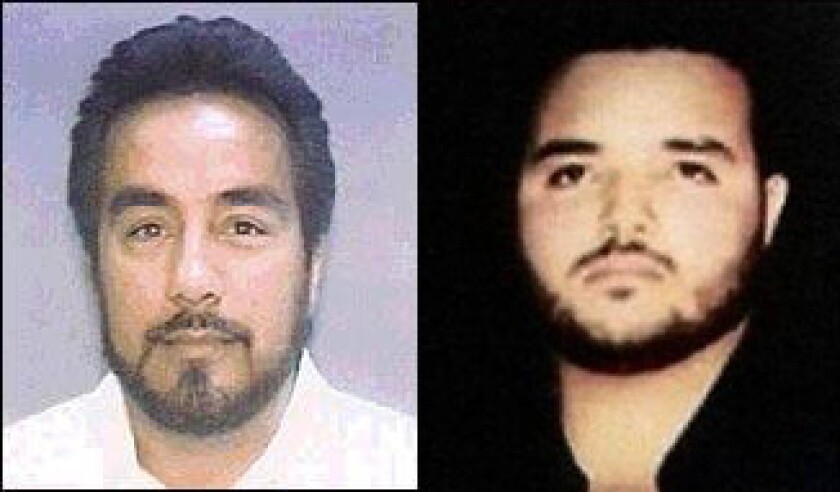 Two high-profile targets from rival drug cartels — a son of the reputed head of the Sinaloa organization, as well as an alleged leader of Tijuana’s once-powerful Arellano Félix Organization — appeared together in the same San Diego courtroom Friday after being discreetly extradited to face U.S. charges.

Ismael Zambada Imperial, in his mid-30s, has been in Mexican custody since November 2014, charged in a wide-ranging indictment against Sinaloa cartel leadership that describes an international trafficking empire headed by his father, Ismael “El Mayo” Zambada Garcia, who is named as lead defendant.

Gustavo Rivera, 58, is named in a similar indictment, yet with different players.

Rivera, who grew up in Chula Vista, was arrested by Mexican authorities nearly 12 years ago at a hot dog stand in San Jose del Cabo on a 2003 indictment alleging his role as a financier and advisor in the Arellano Félix Organization, or AFO for short.

The effort to extradite both men to the U.S. has been ongoing, and it is unclear what triggered their sudden transfers. Both arrived on the same flight to San Diego on Thursday evening.

“They talked about the importance of targeting illicit financial networks and disrupting the illicit movement of cash, weapons, and drugs, combating corruption, and strengthening cooperation on bringing members of TCOs to justice,” the Department of Justice said about the trip.

Neither Mexican nor U.S. officials had publicly commented on the extraditions as of Friday evening.

In a brief arraignment Friday afternoon, the men, wearing orange jumpsuits, were seated in separate rows and informed of the drug-trafficking conspiracy charges against them. U.S. Magistrate Judge Michael Berg entered not guilty pleas on their behalf.

Both agreed to remain in custody without bond until they could discuss whether to challenge detention with their attorneys.

Watching from one side of the courtroom gallery were current and retired investigators who have spent years working on the cases, while on the other were family members of the men who offered support.

One of them was Serafin Zambada Ortiz, Zambada Imperial’s younger brother who had been arrested in 2013 and sentenced in a neighboring courtroom last year for participating in cartel business. He has already served his 5½-year prison term.

Defense attorneys who appeared for the men declined to comment Friday.

The Sinaloa and Arellano Félix cartels went to war in the 1990s and 2000s, battling over the lucrative smuggling routes into Southern California that had been held by the Arellano Félix brothers.

The AFO was then slowly dismantled as investigators and prosecutors in San Diego targeted the hierarchy.

The primary indictment at the center of that effort charged 11 leaders, including the three surviving Arellano Félix brothers, alleging a drug-trafficking scheme that sourced cocaine directly from Colombia and moved multi-ton loads by sea, air and ground into the U.S.

The profits, estimated in the hundreds of millions of dollars, were smuggled back to Mexico to enrich its leaders and grow the operation, the indictment alleged.

The 2003 indictment painted AFO as particularly violent, with a program that recruited, trained and armed bodyguards and assassins who targeted anyone who got in their way — from rival traffickers to snitches to uncooperative authorities to journalists. Law enforcement estimated that the group was responsible for more than 100 drug-related murders in Mexico and the U.S. The indictment specified 20.

Rivera was charged in a separate indictment unsealed at the same time, outlining his rise to power in the cartel. (He is charged as Gustavo Rivera Martinez, but at Friday’s hearing he told the judge to drop the Martinez.)

Rivera was a longtime dope dealer who graduated from Bonita Vista High School in Chula Vista and did prison time on marijuana charges.

Beginning in 1997, Rivera became a lieutenant as comrades were either arrested or killed, the indictment alleges.

He helped oversee the importation and distribution of drugs, including financing the purchase of boats for smuggling and rental homes in San Diego for drug storage, according to the indictment. He is also accused of managing and directing the cartel’s enforcers and bodyguards.

By 2002 — with Ramon Arellano Félix killed in a shootout with a Mexican police officer and Benjamin Arellano Félix in Mexican custody — Rivera became a “close confidant and adviser” to Javier Arellano Félix, the youngest of the brothers who took the reigns as leader, the indictment alleges.

Rivera was arrested in March 2008 in Baja California Sur at one of his favorite spots to eat. Mexican authorities said at the time he would soon be expelled to the U.S., but it took more than a decade.

Zambada Imperial, known by the nickname “Mayito Gordo,” has spent less time behind bars. He was arrested five years ago in the Sinaloa stronghold of Culiacán, where he led the life of a playboy that was closely followed on social media.

He is specifically accused of taking part in cocaine and marijuana importation and distribution, as well as laundering money and sending it back to Mexico, according to the indictment.

Brother Ismael Zambada Sicairos, known as “Mayito Flaco,” is also named in the San Diego indictment but remains at large, alongside his father.

Also charged in the same case is Ivan Archivaldo Guzman-Salazar, known as “Chapito,” the son the more public face of the Sinaloa cartel, Joaquín “El Chapo” Guzman. He is also still wanted by authorities and is believed to have called for the massive armed response in Culiacán in October to pressure Mexican authorities to free his brother, Ovidio Guzmán López.

The two Sinaloa familes waged a different sort of battle against one another earlier this year. Vicente Zambada Niebla, another of the elder Zambada’s sons, testified against “El Chapo” during his blockbuster Brooklyn trial. The testimony came as part of a deal with prosecutors in Chicago following a 2009 arrest in Mexico.

Last week, one of Sinaloa’s high-level enforcers and a childhood friend of the Zambada boys, Jose Rodrigo Arechiga Gamboa, aka “El Chino Antrax,” was sentenced in San Diego to seven years and three months in prison as part of a plea deal.

As for the AFO-Sinaloa beef, it still exists. The vestiges of the Arellano-Felix cartel have since aligned with another Sinaloa rival, the Jalisco New Generation Cartel, which is fighting Sinaloa for domination of the Baja California corridor.