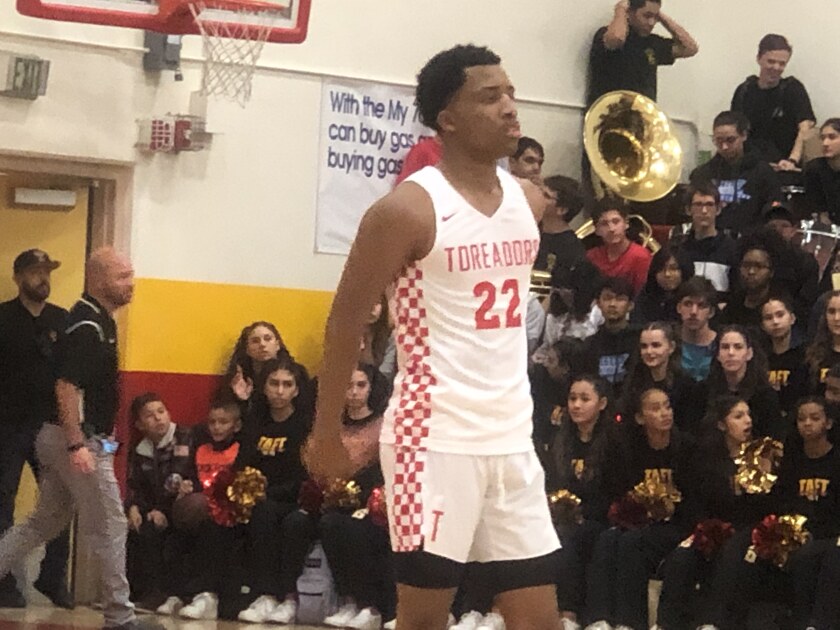 Derrick Taylor has coached so many top basketball players at Woodland Hills Taft that he could form two elite five-man teams of mostly guards.

On one side could be Jordan Farmar, Spencer Dinwiddie, Larry Drew, DeAndre Daniels and Kihei Clark. The other side could be old-timers Justin Hawkins, Michael Williams, Kris Yanku and Oscar Bellfield, leaving a spot open for Taft’s next prolific player, sophomore Ramel Lloyd.

Averaging 21.1 points, the 6-foot-6 Lloyd has reached such a comfort zone that he has helped propel Taft (14-5, 4-0) into a potential high seeding for the City Section Open Division playoffs if the Toreadors go unbeaten in the West Valley League. Taft has won four consecutive games.

“He’s as talented as anyone we’ve had,” Taylor said. “I’ve never had a sophomore score like this. He has an elite level offensive skill set.”

Ramel Lloyd heating up. He has 20 points. Taft takes 41-31 lead over ECR. pic.twitter.com/8hUM9Dsh6F

“We’re coming together as a team,” Lloyd said. “Derrick Taylor puts me in spots to succeed.”

Taft should get even stronger next week when standout senior Khalil Haywood is scheduled to return after an ankle injury.

It’s get away weekend in high school basketball, with teams boarding flights at LAX for the East Coast. Chatsworth Sierra Canyon, Temecula Rancho Christian and Santa Ana Mater Dei will be playing in the Hoop Hall Classic in Springfield, Mass. Rolling Hills Prep is in Canada. Taft was scheduled to take an 11:15 p.m. flight on Friday to play a game on Saturday in New Jersey, then return to play a game on Monday.

“Psycho,” Taylor said of his scheduling.

Taylor’s son, Langston, is a starting guard for the Toreadors, and former Taft coach Jason Hart’s son, Jason Jr., also starts. Hart is now an assistant coach at USC, which has offered Lloyd a scholarship.

Lake Balboa Birmingham, which started the week trying to end a six-game losing streak, received 29 points from Cory Cofield in a 68-55 win over Granada Hills.

In the Trinity League, coach Matt Dunn of Bellflower St. John Bosco pulled off a feat no other coach in California has accomplished. His team defeated Santa Ana Mater Dei and coach Gary McKnight for the third consecutive season. The Braves (16-5, 3-1) won 70-62 on Friday. Kentucky commit Devin Askew tried to rally Mater Dei (16-4, 3-1) from a 13-point deficit. He scored 18 of his 29 points in the fourth quarter.

Lamaj Lewis is fouled but finishes the play! FT made.59-48 Braves. pic.twitter.com/CuByLcQ4qj

Brandon Whitney had 42 points to lead Mission Hills Bishop Alemany to a 83-79 overtime victory against Encino Crespi in a Mission League game.