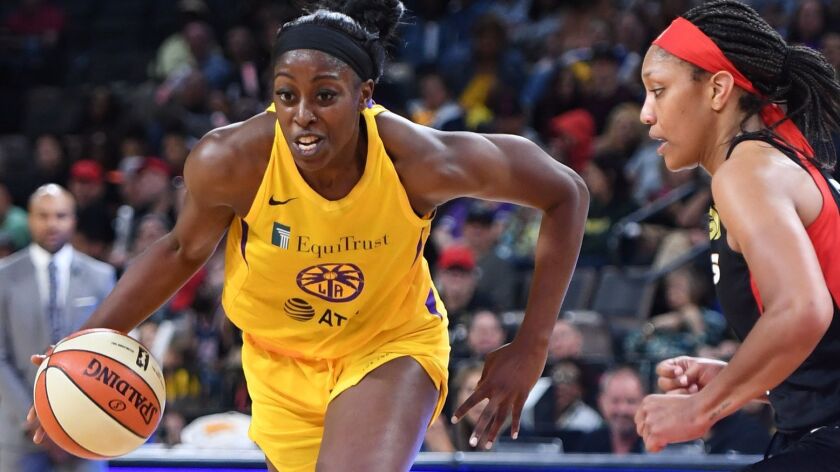 Chiney Ogwumike believes the Sparks will win a championship in the WNBA’s shortened bubble season, but the forward won’t be there to help.

Ogwumike and guard Kristi Toliver will opt out of the 2020 season, they announced Friday, citing medical precautions and health concerns amid the coronavirus outbreak.

With the WNBA scheduled to start in July at IMG Academy in Bradenton, Fla., Ogwumike suggested in a statement that she would not have sufficient time to prepare for the unorthodox, 22-game season as previous injuries require careful attention. The two-time All-Star missed the 2015 season because of a knee injury and the 2017 campaign after Achilles surgery.

“This year is unprecedented in many ways,” Ogwumike said, “therefore my team and I have come to the decision to be proactively cautious and put my body first.”

After helping the Washington Mystics to a WNBA championship last year, Toliver signed a three-year deal with the Sparks as a free agent in February. The 33-year-old point guard averaged 13 points and a career-high 6.0 assists per game last year.

“Though I want very much to compete with my team, to be a leader and show up for them, I am not comfortable with the risk to my physical health — short-term and long-term — given the many unknowns of COVID-19 and the risk of injury,” Toliver said in a statement. “For me, the right decision under the circumstances is to opt out for the year.”

Sixteen NBA players have tested positive for the coronavirus in the league’s opening round of testing, the NBA and its players’ union announced Friday.

Toliver said she would take the time off to prepare for the 2021 season and find ways to advocate for social issues. Ogwumike, who is part of LeBron James’ #MoreThanAVote campaign to combat voter suppression, also said she would use the season to “elevate and empower my teammates and fellow players in the WNBA as we continue to fight for our communities.”

Nine WNBA players have opted out of the season as of Friday, including Mystics guard Natasha Cloud and Minnesota Lynx star Maya Moore, who will both sit out to advocate for social change. WNBA players who sit out this year still are guaranteed 100% of their salaries.

Toliver was one of the Sparks’ premier free-agent signings as the team hopes to bounce back from getting swept in the semifinals last season. Without her, the Sparks’ backcourt will run through point guard Chelsea Gray and Seimone Augustus, the former Lynx star who signed as a free agent.

The frontcourt still has stars Candace Parker and Nneka Ogwumike. Chiney, the younger sister who averaged 9.6 points and 7.1 rebounds per game during her first season as a Spark last year, remains confident in the veteran-laden squad.

“I fully believe this team will win a championship this year and I will be rooting for them every step along the way,” Chiney said. “This isn’t goodbye, it’s just see you later.”