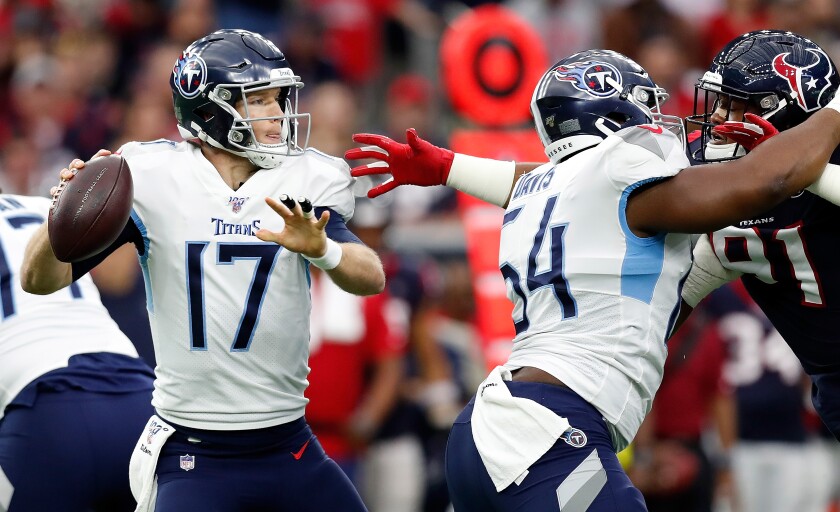 Sports gambling: Value in NFL playoffs is often with the underdogs

With the new year, we move to the NFL’s second season with the wild-card playoff round this weekend.

I still stick to my dog-or-pass philosophy. But just because I bet only underdogs doesn’t mean I bet every underdog.

Let’s go over this weekend’s card.

This game is closer to a pick-‘em and maybe even Buffalo as a short road favorite. I’m not sure the Texans should be given anything for home-field advantage as they, despite upsetting the Patriots in Houston, are 1-5 against the spread (ATS) as home favorites with straight-up losses to the Panthers and Broncos. This line has come down from 3 to 2.5, which makes sense.

Having said all that, I’m taking the Under as my Best Bet. Both defenses should step up, and it helps that the Texans welcome back J.J. Watt. I made this total 40. The Westgate opened it at 39.5 before getting bet up to match the rest of the market, but the first call was probably right.

The Patriots’ loss to the Dolphins as 17-point home favorites wasn’t only embarrassing, it also relegated them to wild-card weekend for the first time since 2009. Most people are thinking Bill Belichick and Tom Brady will just flip the switch and roll at home now that the playoffs are starting, but I’m not so sure this team will be able to do it. We’ve seen warning signs all year that Brady isn’t elevating the players around him like he used to, and the defense padded its stats against a soft early schedule and hasn’t been nearly as dominant against good teams.

Giving up 27 points at home to Miami with a first-round bye on the line provides more confidence that Tennessee can do the same. The Patriots have had problems stopping strong running games, and the Titans have NFL rushing leader Derrick Henry (1,540 yards). Quarterback Ryan Tannehill has blossomed in Tennessee and has enough mobility to buy extra time and hit big plays, especially to WR A.J. Brown. Titans in a not-so-titanic upset.

We know the Saints looked like world-beaters in their routs of the Colts, Titans and Panthers the last three weeks, and the Vikings are limping into the playoffs after losing to Green Bay and Chicago. But in handicapping this matchup, I made the Saints only about three-point favorites.

The Vikings’ defense is still good enough to contain Drew Brees & Co., and the offense is getting running back Dalvin Cook back. He should also open it up for Kirk Cousins, so the Saints will have to respect the play-action fake. I’m not as confident in the outright upset, but taking the points is definitely the play.

Anyone have a coin to flip? This is a toss-up, further emphasized by some books opening the Eagles as short home favorites while others opted for the Seahawks. The market has moved to Seattle being favored. I made the Seahawks one-point favorites. They’ve actually performed better on the road this season (7-1 straight up, 5-2-1 ATS), including a 17-9 win Nov. 24 in Philadelphia, so why shouldn’t they be favored?

The teams are very similar, with defenses that aren’t as strong as in recent years and quarterbacks Russell Wilson and Carson Wentz carrying the offenses with a hodgepodge of weapons. Despite the earlier score, expect this to be a shootout, so take the Over.