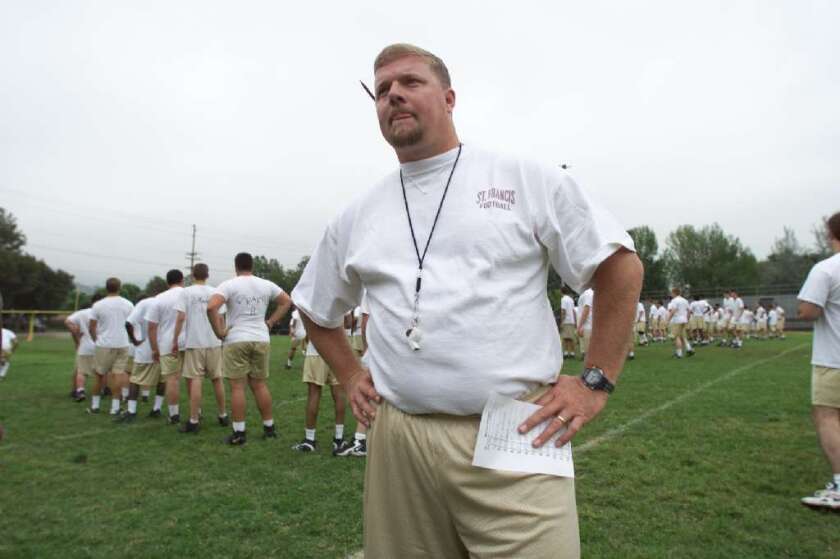 Lots of football games were canceled last Friday because of the Saddleridge fire in the San Fernando Valley. Roads and freeways were closed. Homes were threatened and burned. St. Francis was scheduled to play Lancaster Paraclete at Palmdale High. It was Paraclete’s homecoming. Canceling the game would have been the easy thing to do for St. Francis since the 5 Freeway was shut down.

But St. Francis coach Jim Bonds directed his team to board the bus in La Cañada Flintridge for the usually one-hour trip just past noon, and the team made it — in 3 hours, 15 minutes. Bonds couldn’t even get to the bus from his home in the Santa Clarita Valley because the freeway was closed. He drove himself to Palmdale. Box lunches were purchased from a Jersey Mike’s for players on the bus. St. Francis lost 38-33 in a game decided in the final 1:30.

“When you talk about classy kids, coaches and administration, the bar has to be set by the good folks at St Francis. As you know, the fires this weekend wreaked havoc on most of the high school sports schedules. As luck would have it, we had our homecoming game scheduled for this Friday. Also as you know, two of our last three homecoming games have been forfeited, which certainly makes it tougher to have a homecoming celebration, homecoming queen or homecoming gathering. With the fires, it was a very difficult task to get [to Palmdale]. What usually would be an hour and a half drive became a three to four hour (they wouldn’t tell me how long it took) drive going down the 210 to the 15 to the 138, all which were tremendously backed up because of the fires.

“They knew it was coming, but as soon as we told them it was our homecoming, there was no way they were NOT coming. They withstood the long drive, they handled it was class and refused to use it as an excuse, knowing it was an important Division 3 game and that they were putting themselves at a disadvantage sitting on the bus for four hours. Jimmy Bonds, Tom Moran and the good young men at St Francis deserve a shout out for ensuring our school got to have a homecoming game this year.

“I realize this is nothing heroic or spectacular, just another example of good people doing the right things for the right reasons, and they deserve to be recognized.”