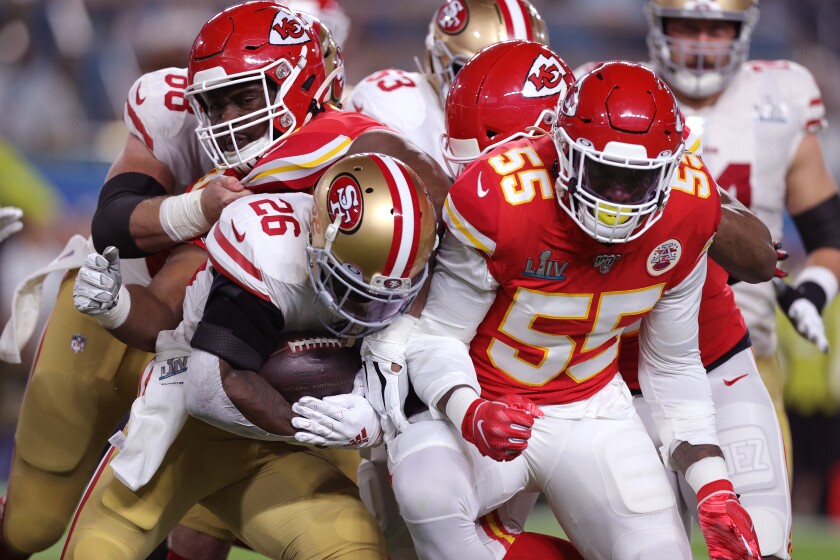 CHIEFS TOUCHDOWN — 2:44, fourth quarter: Kansas City quarterback Patrick Mahomes connects on a five-yard touchdown pass to running back Damien Williams, who just managed to get the ball over the plane of the end zone as he ran out of bounds. The play was reviewed extensively before the touchdown was confirmed. With the successful extra point, the Chiefs take a 24-20 lead.

The seven-play, 65-yard drive was fueled, in part, by a 38-yard pass reception by Sammy Watkins.

49ERS PUNT — 5:10, fourth quarter: San Francisco goes three and out on its ensuing possession. Chiefs take over at their own 35.

A 20-yard pass interference call on 49ers defensive back Tarvarius Moore on a third-down pass attempt to Kelce on the play before kept the 10-play, 83-yard drive alive. A 44-yard pass to wide receiver Tyreek Hill earlier in the drive also helped. Each team has all of their timeouts left.

49ERS PUNT — 8:53, fourth quarter: San Francisco’s drive after its interception sputters out at its own 37-yard line. The Chiefs take over on their own 17.

49ERS INTERCEPTION — 11:57, fourth quarter: A Patrick Mahomes pass intended for Tyreek Hill bounces out of the wide receiver’s hands and is grabbed by 49ers defensive back Tarvarius Moore, who returns it seven yards to the San Francisco 20-yard line. That’s Mahomes’ second pick of the game and it destroys a promising 12-play, 52-yard drive for the Chiefs.

END OF THE THIRD QUARTER — 49ers lead the Chiefs 20-10 as the fourth quarter gets underway. The Chiefs have the ball at their own 46-yard line.

49ERS TOUCHDOWN — 2:35, third quarter: Raheem Mostert scores on a one-yard touchdown carry to give San Francisco a 20-10 lead after the successful extra point.

An interception by linebacker Fred Warner gave the 49ers the ball at midfield before passes of 16 yards to Deebo Samuel and 26 yards to Kendrick Bourne put the 49ers in the red zone. A 10-yard completion to fullback Kyle Juszczyk came just before Mostert’s touchdown.

How will Patrick Mahomes and the Chiefs respond?

49ERS INTERCEPTION — 5:23, third quarter: Patrick Mahomes is picked off by 49ers linebacker Fred Warner, who returns it three yards to the 49ers’ 45. Both Mahomes and Jimmy Garoppolo have each thrown an interception tonight. On the first play of the ensuing possession, Garoppolo connects on a 16-yard pass to Deebo Samuel to put the 49ers in Chiefs territory.

SECOND HALF UNDERWAY — The 49ers start from their own 16-yard line.

HALFTIME — A 42-yard completion to George Kittle is wiped out after the San Francisco 49ers tight end is called for offensive pass interference. If the call hadn’t been made, the 49ers would have been inside the Chiefs’ 10. The teams are tied 10-10 at halftime.

Yep, that was indeed Shakira singing part of "Waka Waka (This time for Africa)," the official anthem of the 2010 World Cup

What did you guys think of the #SuperBowl Halftime Show? pic.twitter.com/EW3W1JAqVI

CHIEFS PUNT — :59, second quarter: Chiefs’ drive sputters at midfield. Dustin Colquitt punts into the end zone for a touchback with :59 seconds remaining in the first half. The 49ers have three timeouts left but don’t go far before the first half ends with the two teams tied 10-10.

49ERS TOUCHDOWN — 5:05, second quarter: Jimmy Garoppolo connects with fullback Kyle Juszczyk for a 15-yard touchdown. The extra point is good and the score is tied 10-10. The pass culminates an impressive, seven-play, 80-yard drive by the 49ers.

CHIEFS FIELD GOAL — 9:32, second quarter: Harrison Butker kicks a 31-yard field goal to give the Chiefs a 10-3 lead. San Francisco’s defense comes up big to keep the Chiefs within striking distance on the scoreboard.

CHIEFS INTERCEPTION — 14:08, second quarter: Kansas City cornerback Bashaud Breeland picks off a pass by 49ers quarterback Jimmy Garoppolo that was intended for Deebo Samuel. The pick came on the 49ers’ first possession after the Chiefs’ touchdown. On the next play, Patrick Mahomes connects on a 28-yard pass to Sammy Watkins to put the Chiefs on the 49ers’ 28 before a false start penalty by Laurent Duvernay-Tardif pushed them back five yards.