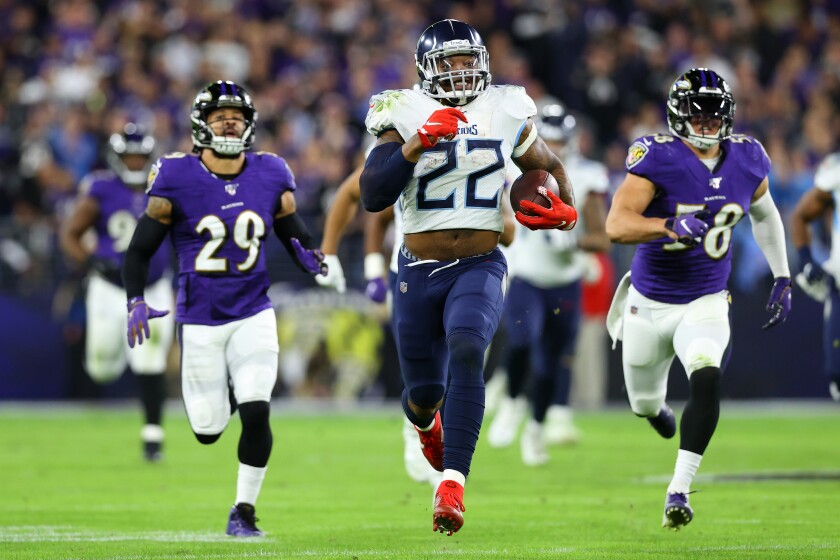 Tennessee remains a good team to bet in the NFL playoffs

The dog-or-pass approach didn’t fare so well in the NFL divisional playoffs, but anyone following along should have had at least a 50/50 split.

I was glad to have stressed that Tennessee was the best bet of the weekend, as they upset Baltimore 28-12 on Saturday night. I also was happy to end the weekend with the Over 46 in Green Bay’s 28-23 win over Seattle. I passed on the Seahawks +4, believing the line was too short. It proved right, though some underdog bettors salvaged a push at +5.

The early Saturday and Sunday games didn’t treat us as well. It looked good to take Houston +9 1/2 when it went up 24-0 over Kansas City, but then we saw its historic collapse, failing to cover in the 51-31 loss. However, that loss is easier to take than our play on Minnesota +7 in their 27-10 loss to San Francisco.

I thought the line was too short to take the Vikings when it was +6 1/2. If this had been the regular season, I’m pretty sure I would have passed even after the line went to 7. So, there’s disappointment I didn’t have the discipline to pass even though it’s the playoffs. Hopefully this is a lesson learned.

The Titans have been my best bet two weeks in a row, and it shouldn’t surprise anyone that I’m riding them and Derrick Henry again. After they disposed of defending champion New England and the No. 1-seeded Ravens, I see no reason they can’t do the same to the Chiefs. The Titans already beat the Chiefs 35-32 on Nov. 10, when Henry ran for 188 yards and two touchdowns while Ryan Tannehill passed for 181 yards — more than he’s had to pass for in the two playoff wins combined — and two touchdowns. Granted, the Texans had a regular-season win over the Chiefs, but I trust the Titans’ defense much more than the Texans’. In fact, while Henry is running wild, I think the Tennessee defense isn’t getting the credit it deserves for holding the Patriots to 13 points and the Ravens to 12. There is nothing to make me think the Chiefs can shut down Henry, and don’t be surprised if you see Mike Vrabel open up the offense with Tannehill off play-action. The Titans’ secondary and linebackers have been impressive, as Vrabel has put his stamp on the defense. The Chiefs are faster than the Titans’ other opponents and Patrick Mahomes can throw into tiny windows, but expect some wrinkles from Vrabel — a Bill Belichick disciple.

It’s tempting to take Aaron Rodgers +7 1/2, as the line has ticked up from the opener of 7, but this is where we check our notes from the Vikings-49ers lecture. I’ve thought all season that the Vikings were a mirror image of the Packers and power-rated about the same, so this line is short. The fear is seeing a result similar to last week, when the 49ers dominated the Vikings 27-10, similar to the 37-8 beating the 49ers handed out when the Packers visited Nov. 24. The Packers will probably close the gap, but I’m not sure they can keep within one score. That’s especially true since San Francisco quarterback Jimmy Garoppolo and the defense, which has gotten healthier, play better at home. I’m going Over 45 points as the better bet, as I expect both offenses to have success and the 49ers to win comfortably.