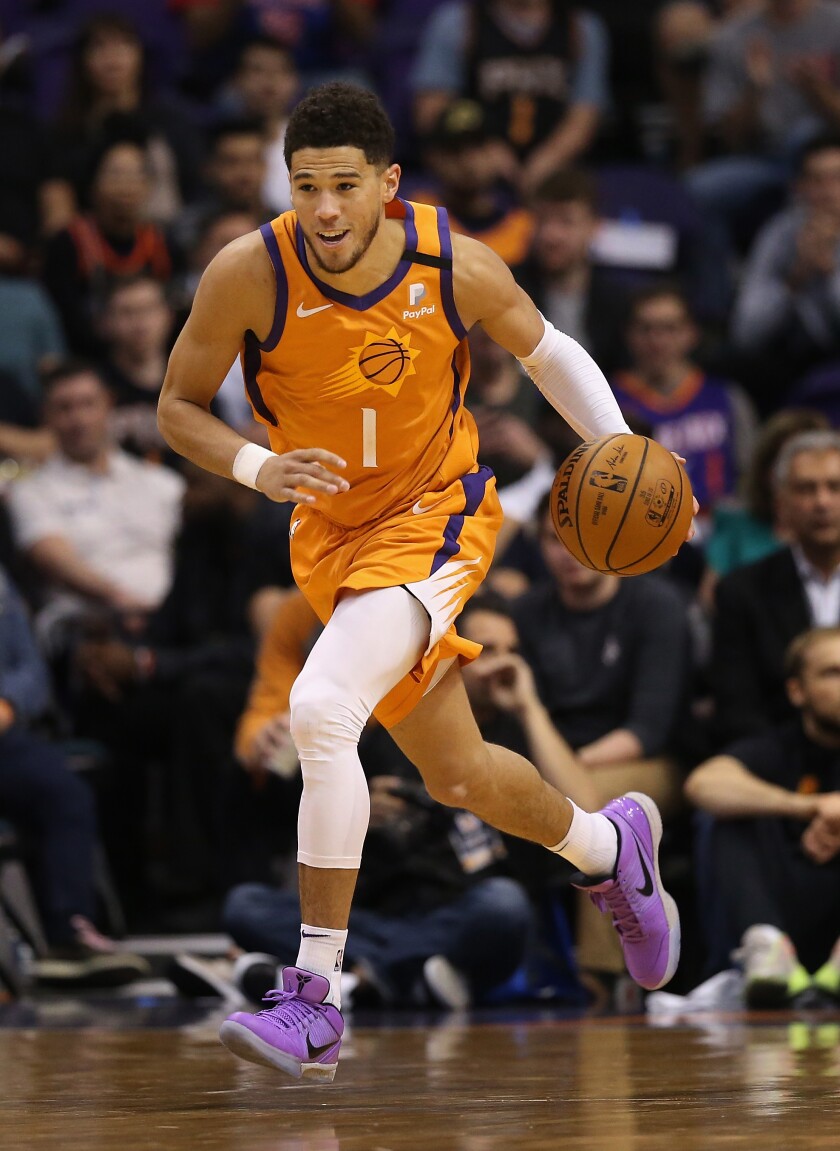 Phoenix Suns guard Devin Booker was at his home in Paradise Valley, Ariz., playing video games the night the NBA season came to a sudden halt. His reaction, which was captured while he was livestreaming, is perhaps the best recorded response to one of the most surreal nights in league history.

“You kept hearing in the news that night that different people were getting [COVID-19],” Booker said. “I think Tom Hanks was the first celebrity that had it, and he put out a statement before I started playing. They were talking about it before the Oklahoma City-Utah game, and then they took the players off the court just before tipoff, which I’d never seen before. I realized there was something serious going on and maybe one of the players had it.”

As he was keeping up with the news, Booker started to play “Call of Duty: Warzone,” which had been released the day before, with his friends and professional streamers Matthew “Nadeshot” Haag and Dennis “Cloakzy” Lepore. Booker, who made his NBA All-Star game debut last month, found out he wouldn’t be playing basketball for the foreseeable future from “Nadeshot” and “Cloakzy” before anyone from the team could contact him.

Eight million log on daily. Its top players make millions. Will this finally be esports’ moment?

Eight million log on daily. Its top players make millions. Will this finally be esports’ moment?

As the coronavirus shuts down sports and keeps fans indoors, a huge opportunity opens for the proliferation of esports.

“I was trying to play at the same time as all of this was happening and getting updates on social media,” Booker said. “When they told me that the season was shut down, I couldn’t believe it. The world has never seen anything like this, which is why I reacted the way I did. That was my real-time reaction. I dropped a few curse words, which is not ideal, but I really couldn’t believe it.”

Booker was in shock but continued playing and has spent much of his time away from the court continuing to play “Call of Duty: Warzone” with friends, family and other players in the NBA such as Kyle Kuzma and Paul George and celebrities like rapper Quavo. Booker, who streams regularly on his Twitch channel, plays about 5-10 hours per day now with the NBA season suspended. He says playing “Call of Duty” helped him stay in touch with his friends long before he was told to quarantine at home.

“When I moved away from my childhood friends in Grand Rapids, Michigan, to Mississippi during high school, playing ‘Call of Duty’ was a way to keep in touch with them and be competitive with my homies and be able to talk with them and get filled in on what was going on at school and in their lives,” Booker said. “It’s always been a great communication tool for me.”

The “Call of Duty” franchise, which began in 2003, is arguably the most popular video game among professional athletes, but Booker doesn’t consider himself a novice like many of his peers.

“If I’m being completely honest,” he said. “I don’t think anyone is at my level.”

He used to camp outside stores at midnight before the game was released and would miss school the next day to play it at home. Back then, Booker was a fan of “Nadeshot,” who was a professional “Call of Duty” player, and is now the founder and co-owner of the esports team 100 Thieves, which boasts Cleveland Cavaliers owner Dan Gilbert, Drake and Scooter Braun as other co-owners.

NBA teams and players have donated more than $38 million and nearly 1.5 million meals since the COVID-19 pandemic shut down the league.

“I’ve been following ‘Nadeshot’ since way before I was in the NBA,” Booker said. “When I bought this house, I called him and I was like, ‘Bro, what do I need to do to make sure my setup is just as good as yours?’ He sent me a PDF file of every single thing that a player for 100 Thieves would have.”

While Booker’s home gaming setup rivals that of most professionals, he never thought he would need a home gym and basketball court. His 5,600-square-foot home sits 15 miles northeast of the Suns’ arena and training facility. Like most arenas and gyms around the country, it has been shut down because of the COVID-19 pandemic, leaving Booker searching for alternative options to stay in shape in case the NBA season resumes.

“It’s been weird, man,” Booker said. “I’ve thought about it a lot, and I’ve been talking about it with other players. This is the most in the dark we’ve been about anything. We really don’t know what’s next or what’s going to happen. Not being able to be in the gym is hard, but safety is our main priority.

“I’m trying to stay prepared as best as I can. I’m trying to eat the right way and get my push-ups and sit-ups in when I can. I actually bought a basketball hoop a week ago and put it up outside, so I’ve been shooting on that, but that’s about it. I’ve just been playing video games and relaxing with the family.”

The seriousness of COVID-19 hit Booker last week when his friend and former Kentucky teammate Karl-Anthony Towns of the Minnesota Timberwolves found out his parents tested positive for the virus and his mother was in a medically-induced coma.

“I talk to Karl a lot, and I’m trying to be a friend that he can lean on through this time,” Booker said. “I’m close to his mom, Jackie, and his father, Big Karl. It’s an everyday fight. Karl is in good spirits, but just having someone that close to me be affected by the virus and seeing what it could do made me take it that much more serious.

“A lot of people don’t have the information, so it was important for Karl to be vulnerable and put himself out there and tell people what he’s going through and dealing with was big.”

Catching up with the Lakers All-Star forward and what it’s been like for him during the quarantine and continuing suspension of play.

Beyond playing video games, Booker is using his livestreaming channel on Twitch to raise money for COVID-19 relief efforts. Booker pledged $100,000 to start the campaign on Twitch, Phoenix Suns Charities matched it, and he’s hoping to add more through donations. If nothing else, he’s hoping to connect with and educate more people through streaming while social distancing.

“This is actually how I usually stay attached and stay connected,” Booker said. “The way technology is set up, it’s like being at a party. You’re talking with everyone, you’re laughing, and you’re just getting to know people while you’re playing a video game.

“I don’t know if that sounds strange, but I’ve been doing it my entire life. It’s always been a safe place for me to go. As soon as I put that headset on, I’m in a different world, but at the same time I’m still talking with my friends and family and staying attached to everybody.”