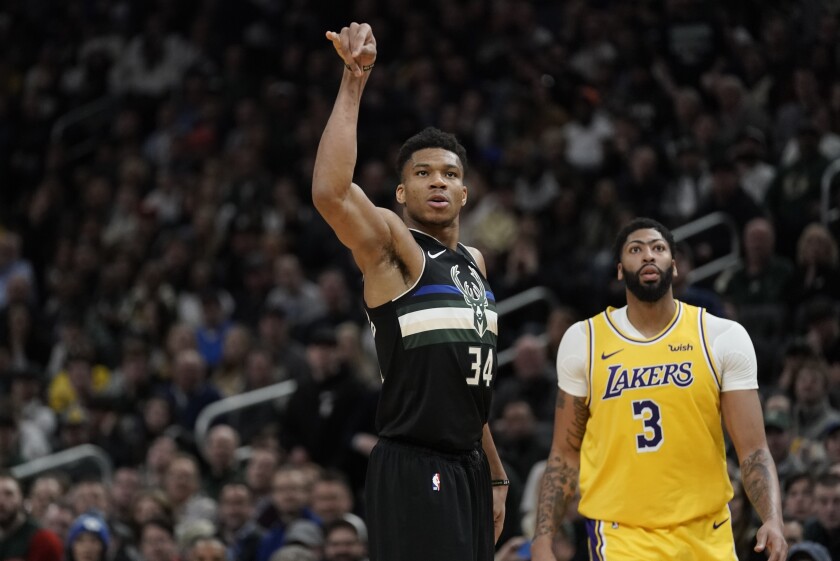 The Sports Report: Apparently the Bucks are the best team in the NBA

The loss dropped them to 24-5, and they finished this trip 3-2. Anthony Davis, who missed the Lakers’ previous game because of a sprained right ankle, scored 36 points with 10 rebounds and five assists. LeBron James had 21 points, 12 rebounds and 11 assists for his seventh triple-double this season. He played most of the fourth quarter with five fouls.

Giannis Antetokounmpo finished with 34 points, 11 rebounds and seven assists for the Bucks (25-4). He also made five three-pointers – a career high.

“You’ve got to tip your hat to him, he made five of them, and they was all tough looks,” Davis said. “Two tightly contested at the end of the shot clock. One was wide open and I think the other two was dribble up threes from the wing, which he likes the top of the key. You tip your hat off to him and we move forward.”

The Lakers looked lethargic and disorganized as the game started. They struggled to run plays, got in each other’s way and committed careless turnovers. James and Davis went one-for-11 shooting combined in the first quarter, with Davis making the only shot. It all added up to them tying their lowest scoring first quarter of the season as they trailed 23-17.

Things did not improve in the second quarter. Milwaukee outscored the Lakers 20-7 before coach Frank Vogel took a timeout. There were moments where the Lakers seemed to come back to life, but they didn’t last. Vogel was hit with a technical for arguing a call that may have been his attempt to liven up the Lakers.

Russell Westbrook scored 40 points in 40 minutes to lead the Houston Rockets to a 122-117 victory over the Clippers, who lost for only the second time this season at Staples Center despite shooting 49.4% from the field and 43.2% from three-point range.

Paul George led the Clippers (21-9) with 34 points on 12-of-23 shooting, making six of 12 from behind the three-point line. Kawhi Leonard had 25 points while Montrezl Harrell added 19 off the bench. George and Leonard each had nine rebounds to lead the team.

The Clippers built a 69-54 lead by halftime but were outscored 36-18 by the Rockets in the third quarter.

Pierre-Luc Dubois scored in overtime, Zach Werenski had a goal and an assist, and the Columbus Blue Jackets rallied to beat the Kings 3-2.

Boone Jenner scored with 1:43 remaining to force overtime for the Blue Jackets. Dubois got the game-winner 1:11 into overtime when he took a tape-to-tape pass from Gustav Nyquist on a 2-on-2 rush.

Adrian Kempe and Jeff Carter scored for the Kings, who lost in overtime for the second time in four games. Los Angeles was beaten after leading for two periods for the first time this season.

Joonas Korpisalo stopped 23 shots to earn his 15th win of the season. Jack Campbell made 25 saves for the Kings.

The deal, which will not be formalized until Teheran takes a physical, is not the splashy move Angels fans had hoped for. Teheran only seems to backfill a rotation in need of a true frontline starter.

But as with the recent acquisition of right-handed starter Dylan Bundy, the Angels added a durable pitcher. Teheran has thrown no fewer than 174 innings each season since earning his first opening day roster spot in 2013. He was a top-ranked prospect when he made his major league debut in 2011.

The California horse racing industry at Santa Anita Park, reeling from a series of equine deaths and threats from state and national officials, was cleared of any criminal wrongdoing Thursday by the Los Angeles County district attorney’s office.

After a nine-month investigation, a special task force that looked into 30 deaths at Santa Anita during this year’s winter/spring meeting issued a 17-page report that “did not find evidence of criminal animal cruelty or unlawful conduct.”

The report did offer 27 recommendations for safety improvements, most of which have already been acted upon or were also recommended by the California Horse Racing Board.

The CHRB is also planning to issue a report, probably in January, that will include the results of necropsies on the horses.

What is your all-time favorite sports moment? Email me at [email protected] and tell me what it is and why, and it could appear in a future Sports newsletter.

This moment comes from Dave Beckwith:

I grew up in South Dakota dreaming of the day I could go to a major league baseball game. As a kid, I thought this would be something just this side of heaven. In 1965, I came to Biola University in Southern California and attended my first major league game, the Dodgers vs. the Chicago Cubs on Sept. 9, 1965. Sandy Koufax pitched his masterpiece that night, retiring 27 consecutive batters for a perfect game. It was a kid’s dream come true ... in a perfect way.

I am off until Jan. 5 as I attempt to enjoy the holidays. As a results, the sports newsletter will come out more sporadically than usual, but you will still get one after major sports news happens. In the meantime, please visit www.latimes.com/sports for all your sports news. And I hope that, whatever you celebrate this time of year, it is a joyous occasion for you and the people you love.

Highlights of the Lakers-Bucks game. Watch them here.

That concludes the newsletter for today. If you have any feedback, ideas for improvement or things you’d like to see, please email me at [email protected] If you want to subscribe, click here