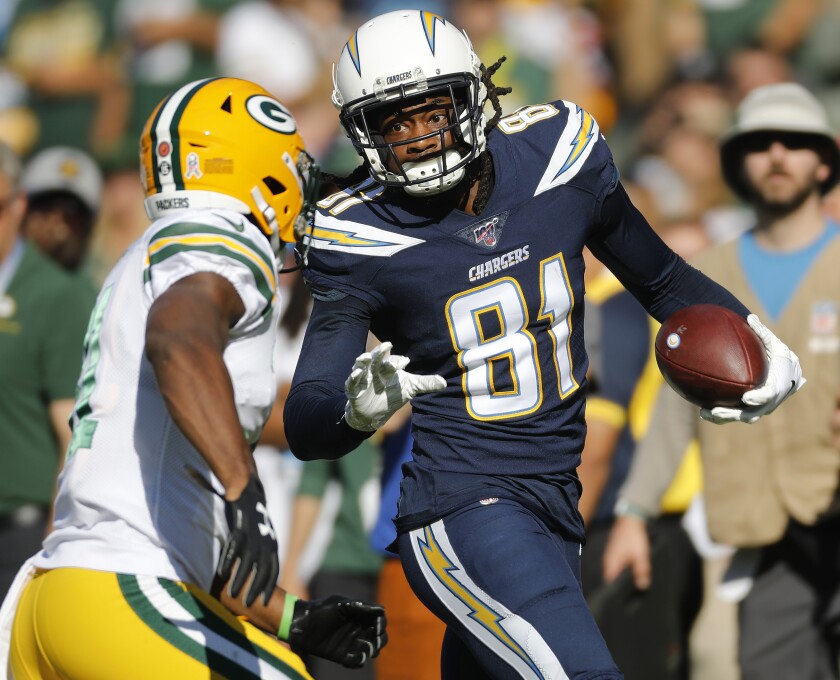 The Sports Report: Chargers, Lakers and Clippers all win, but don’t ask about the Ducks

In their most complete effort of 2019, the Chargers controlled the ball and the clock and shut down Green Bay’s offense in a 26-11 victory at Dignity Health Sports Park.

The performance emerged suddenly for a team that had struggled through the season’s first half with a 3-5 record and largely underachieving.

The Packers entered Sunday 7-1 and had won games at Chicago, Dallas and Kansas City.

With Shane Steichen calling plays for the first time in his career, the Chargers’ slumbering offense awoke with more creativity, tempo and misdirection.

Steichen, who began the season as the team’s quarterbacks coach, took over as interim offensive coordinator last week after Ken Whisenhunt was fired.

The Chargers amassed 160 yards on the ground after failing to rush for as many than 40 yards in four consecutive games.

But just as impressive as the offense’s showing was what the Chargers did on defense.

Nearly five minutes into the fourth quarter, Green Bay’s Aaron Rodgers had passed for only 61 yards and the Packers had only six first downs.

Those numbers swelled on Green Bay’s final two possessions as the Chargers went into a more protective shell. By that point, the game basically had been won.

Read all about them here.

The Lakers didn’t make this one easy on themselves, but they beat the San Antonio Spurs 103-96 for their fifth win in a row.

LeBron James scored 21 points and had 13 assists and 11 rebounds for his second consecutive triple-double, becoming the first Lakers to do that since Lamar Odom in 2006. Anthony Davis had 25 points, leading all scorers, and added 11 rebounds. Avery Bradley was the Lakers’ next-highest scorer with 16 points. He made seven of nine field-goal tries and left the game during the second half with a lower leg injury.

San Antonio started the game with a quick five points before the Lakers scored. But while past opponents have been quick to put the Lakers in double-digit holes, the Spurs couldn’t. The most San Antonio led by Sunday was five.

At halftime, James was already close to a triple-double with 11 points, eight rebounds and eight assists. The Lakers led 56-43 with the help of a buzzer-beating three-point heave by Kyle Kuzma, who scored from near half court.

Although the Lakers built a 19-point lead early in the third quarter, the Spurs kept hanging around. Dejounte Murray, who led San Antonio with 18 points, made a layup with 4:10 left to tie the score at 90. From there, though, the Lakers pulled away.

Kawhi Leonard scored 18 of his 30 points in the fourth quarter to lead the Clippers to a 105-94 victory over the Utah Jazz.

Leonard’s scoring surge helped the Clippers erase a double-digit second-half deficit and remain unbeaten (4-0) at home. He only made nine of 26 shots, but with the game tied at 86, Leonard scored six points to spark a 19-8 run to close out the victory.

After trailing by eight points in the opening quarter, the Clippers opened the second quarter on a 20-4 run. Landry Shamet’s three-pointer gave Los Angeles a 36-24 lead at the 4:53 mark. The Jazz responded with a 17-3 run to finish the quarter and Mitchell’s basket in the final minute gave Utah a 41-39 lead at the break.

Both teams shot under 35% in the opening half. Leonard made just one of nine shots in the first half and scored only five points.

Patrick Kane scored 24 second into overtime off a pass from Jonathan Toews and the Chicago Blackhawks beat the Ducks 3-2.

Cody Bellinger of the Dodgers won a Gold Glove award as a right fielder on Sunday. Bellinger was selected over Bryce Harper of the Philadelphia Phillies and Jason Heyward of the Chicago Cubs.

Bellinger began the season as the Dodgers’ everyday right fielder, but began splitting most of his time between first base and center field in August. He led all qualified right fielders with 19 defensive runs saved and ranked second with 10 outfield assists in 911 1/3 innings. He also logged 230 innings at first base and 170 2/3 innings in center field.

No Angels were awarded a gold glove this season.

Here are the Gold Glove winners:

Also, the Dodgers declined to exercise the $13 million team option on Jedd Gyorko’s contract. Instead, they will pay him a $1 million buyout, making the veteran infielder a free agent.

The Bruins are headed for the season’s most pivotal game in the Pac-12 South Division. It will be UCLA versus No. 9 Utah on Nov. 16 in Salt Lake City for all the marbles, or at least all the ones Bruins fans have left after a bonkers turnaround from their 1-5 start.

If the Bruins (4-5, 4-2) beat the Utes (8-1, 5-1) at Rice-Eccles Stadium for a fourth consecutive victory, it could conceivably forge a three-way tie atop the division standings between UCLA, Utah and USC, provided the Trojans (5-4, 4-2) beat Arizona State next week on the road. That would also lead to a winner-take-all showdown between the Bruins and Trojans on Nov. 23 at the Coliseum, with both teams holding the tiebreaker over the Utes in that scenario.

For the Bruins, their game against Utah is the program’s biggest since facing USC in November 2015 with the Pac-12 South title at stake. Incidentally, UCLA had won at nationally ranked Utah the previous week.

“For sure going to get a jump on Utah this week, make sure we go out and compete,” UCLA cornerback Darnay Holmes said Saturday night after the Bruins polished off Colorado, 31-14, at the Rose Bowl. “It’s gonna be a hectic scene; we’re ready for it.”

DIED ON THIS DATE