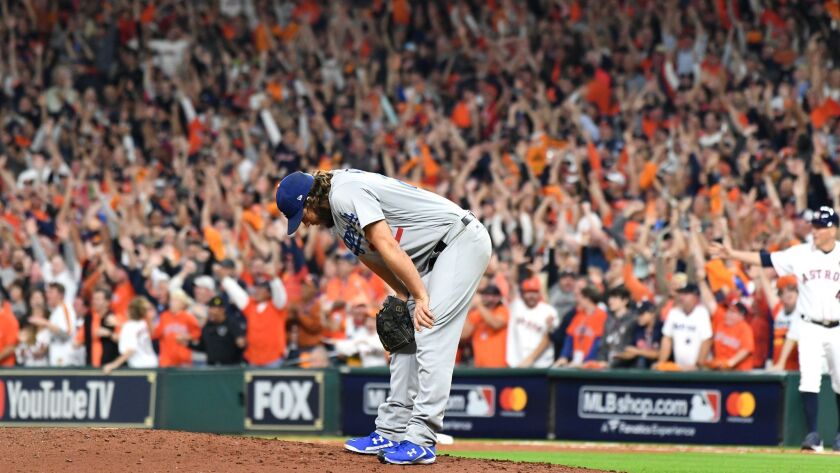 The Sports Report: Houston Asterisks, er, Astros, get their punishment

The punishment for the Houston Astros illegally stealing signs during the 2017 season and postseason was handed down by MLB Monday: A $5-million fine, loss of their first- and second-round draft picks in 2020 and 2021 and general manager Jeff Luhnow and manager A.J. Hinch were suspended for the 2020 season. Shortly after the penalty was levied, Astros owner Jim Crane announced he had fired Luhnow and Hinch.

We will have much more on this in our Dodgers newsletter on Wednesday, but in the meantime, Bill Plaschke sums things up nicely here. An excerpt:

For three years we’ve wondered, and now we know.

How did the Houston Astros hitters so easily pound three of the Dodgers’ hottest pitchers in two key games in Houston in the 2017 World Series?

How did they so easily wreck Yu Darvish for four runs in the second inning of a Game 3 Astros victory? How did they so effortlessly score 10 runs against Clayton Kershaw and Brandon Morrow in the Game 5 victory?

They cheated, that’s how.

They used technology at Minute Maid Park to steal the Dodgers’ signs. Their hitters knew what pitches were coming. They gleefully pounced on them. They accumulated 18 runs with 26 hits and five home runs in two series-changing victories that have now indelibly stamped an asterisk on an event forever marred by a sickening truth.

The Dodgers were cheated out of the 2017 World Series championship.

This is not sour grapes. This is not revisionist history. This is now and forever fact after a Major League Baseball investigation revealed Monday that the Astros used technology to cheat during their championship season.

Have other questions you want answered? Bill Shaikin has you covered in his Q&A about the scandal. Read that here.

Joe Burrow threw five touchdown passes, ran for another score and capped one of the greatest seasons in college football history by leading No. 1 LSU to a 42-25 victory against No. 3 Clemson on Monday night to win the national championship.

The small-town Ohio kid turned Louisiana legend delivered the Tigers (15-0) their first national title since 2007 and fourth overall, breaking a few more records along the way in what was already a historic season. The five TD passes and 463 yards passing are the most for a BCS or College Football Playoff title game as are his six total touchdowns.

He became the first major college quarterback to throw 60 touchdown passes in a season as LSU snapped defending national champion Clemson’s 29-game winning streak. For the first time in his college career, Clemson star quarterback Trevor Lawrence was on the losing team. The Tigers (14-1) had won his first 25 starts.

“He’s one of the greatest players in LSU history,” LSU coach Ed Orgeron said. “He’s on a soapbox for the state of Louisiana and LSU. We are so grateful for Joe Burrow.”

It was Louisiana’s night, and nobody understood that more than Ed Orgeron’s mother, Coco, the native of Larose, La., who speaks fluent Cajun French.

She watched her son celebrate on the field from a wheelchair, receiving congratulations at every turn, until he found her outside the locker room. He bent down to give her a kiss.

Later, she was asked to somehow sum this up.

“It all came to an end today,” she said, “all the dreams and the wishing, and we got to start all over again for next year. We got to keep on wishing.”

It wasn’t the most meaningful shot of the night, but in some ways it was. Dwight Howard hit a three-pointer and the Staples Center crowd erupted in euphoria. He left the game not long after that – what more could he do?

Howard finished with a season high 21 points and 15 rebounds in the Lakers’ 128-99 win over the Cleveland Cavaliers. The win ensured the Lakers continued their undefeated streak against teams with losing records. They have now improved to 33-7 overall, while the Cavaliers fell to 12-28.

LeBron James scored 31 points on 12-of-16 shooting with eight assists and the game was well in hand against his former team.

The Lakers got some bad news heading into the game. Rajon Rondo was given an MRI on Monday that revealed a non-displaced volar plate avulsion fracture on his right ring finger. The injury is sometimes referred to as a jammed finger. Anthony Davis also missed Monday’s game, making it the third consecutive game he’d missed after suffering a bruised buttocks against the New York Knicks on January 7.

Sunday, Davis and Rondo were among a group of players who went to Green Bay for their playoff game against the Seattle Seahawks. Davis, though a Chicago native, is a longtime Packers fan.

“They mentioned it to Rob, Rob mentioned it to me and it’s an off day and it’s something that we endorse,” Lakers Coach Frank Vogel said of their trip. Vogel also said the Lakers’ medical team did not take issue with the players attending the game.

Kyle Kuzma just increased his value to the Lakers, but shot down trade talk

The Blues won their ninth straight home game, tying the franchise record for one season set in 1991. The run marks the longest home winning streak in the NHL this season. St. Louis has outscored its opponents 36-15 during the streak.

Tyler Bozak, Jaden Schwartz and Ivan Barbashev also scored for the Blues, who have won four in a row after a three-game skid. The defending Stanley Cup champions are 12-2-1 in their past 15 games.

Max Comtois had the lone goal for Anaheim, which has lost four straight. The Ducks are 3-9-1 in their last 13 games.

On an otherwise somber Monday at the Dakar Rally — racers mourning the death of a motorcyclist — Casey Currie navigated a dune-filled stretch of Saudi Arabia to finish with a 15-minute lead in the side-by-side vehicle class.

Currie, an off-road racer from Corona, is trying to become the first American to win in any class at the Dakar.

The 12-day “rally raid,” which also includes cars and trucks, ranks among the toughest events in all of motor sports. It is now two-thirds complete after the eighth stage, a 445-mile loop that began and ended in Wadi Al-Dawasir.

Currie and his co-driver, Sean Berriman, lost time replacing a broken axle and, later, an engine belt on the course. They still maintain a lead over teams from Chile and Russia.