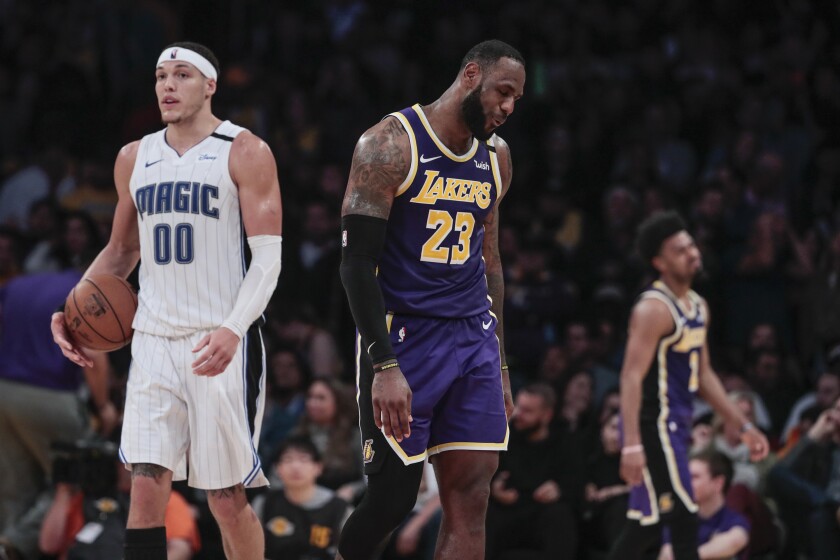 Each time the Lakers put themselves within striking distance in the final minutes, the Orlando Magic had an answer.

For the last week, the Lakers had been beating up on overmatched opponents who couldn’t overcome a team without one of its two stars. On Wednesday, their run finally ended. The Magic won 119-118, handing the Lakers only their eighth loss and first to a team with a losing record. The Magic improved to 20-21.

“Every loss bothers us regardless of it’s a bad team or a good team,” Danny Green said. “Especially when you feel like you’re one of the better teams in the league and where you want to be at the end of the season. You want to be perfect, or close to it.”

LeBron James finished with 19 points and tied a career high with 19 assists. His final assist came at the final buzzer on a basket by Cook, whose season-high 22 points led the game. The Lakers got 14 points from McGee, 17 each from Kentavious Caldwell-Pope and Troy Daniels, and 11 from Green.

In all, the Lakers got 68 points off their bench.

“The bench is the reason there was a game at the end,” James said. “They just came in and produced everything we needed.”

When Kawhi Leonard discussed where the Clippers are at the midway point of the regular season, it shouldn’t be too surprising that he preached calm.

“Don’t be in a rush to win these games,” Leonard said. “Enjoy every moment of this. Enjoy the process. Use it as a learning tool when we get down in the trenches.”

During his postgame news conference Tuesday, that was a repetitive theme. Enjoy this process, this journey. Balance the present with the future.

“We’ve got a long way to go. We’re going to get there,” Leonard said. “… We just can’t be in a rush. Be patient. It’s hard to win a championship. The pressure isn’t even on us now. We just have to enjoy the process.”

The Clippers don’t look like they are enjoying too much recently, considering the team has been playing .500 basketball for the last month. There’s a sense that the team is underachieving, especially when held to the standards the Lakers are setting down the hall in Staples Center.

Don’t confuse Leonard’s monotone for ignorance. He knows exactly where the Clippers are at right now. After all, the Toronto Raptors were in almost the exact same place one year ago.

The Los Angeles City Council is expected to vote within the next week on a resolution urging Major League Baseball to recall the championship trophies presented to the Houston Astros in 2017 and the Boston Red Sox in 2018 “and award them to the Los Angeles Dodgers.”

Councilman Gil Cedillo, whose district includes Dodger Stadium, said neither the Dodgers nor his constituents had requested the resolution.

While this is a nice gesture, the problem is it’s not fair to just give the title to the Dodgers. Who’s to say that if the Astros weren’t cheating, they would have lost to the Yankees in the ALCS? And that the Yankees would have then beaten the Dodgers? Or that the Astros would have lost to the Red Sox in the ALDS? You don’t correct something that was unfair with something that is equally unfair.

Tyrell Terry scored a career-high 24 points and Pac-12-leading Stanford defeated UCLA 74-59 on Wednesday night for the Cardinal’s first victory at Pauley Pavilion since 2004-05.

Jaime Jaquez Jr. scored 15 points and Jalen Hill added 14 with 12 rebounds for the Bruins (8-9, 1-3), who are mired in their second three-game skid of the season. They had won 13 straight home games against the Cardinal dating to 2005-06.

“As the game goes on, our softness shows up,” UCLA coach Mick Cronin said. “Our selfishness at times is evident and it’s been probably to people who have watched us all year on the offensive end, some of the shots we take and the turnovers because certain guys don’t want to pass the basketball.”

Cronin appeared to make save some of his most scathing remarks for redshirt senior guard Prince Ali, though he never mentioned Ali by name. The coach replaced Ali with sophomore guard David Singleton in the starting lineup after saying that Singleton completed his best two days of practice.

Singleton responded with 11 points, two assists and no turnovers in 32 minutes. Ali played just one minute, missing his only shot.

“We just have guys who refuse to listen and follow the rules, so therefore they don’t get to play,” Cronin said. “So if you want to ask me about a certain guy, that’s the answer. To be honest with you, I had to keep playing certain guys that I don’t even think they deserved it. But I didn’t want to put others back in, so I was running out of guys.”

Austin Jackson, the anchor of an improved USC offensive line last season, is off to the NFL.

The junior left tackle announced on social media that he will forgo his final season of eligibility at USC and declare for the draft.

“USC has truly been such a special place to call home for the last three years,” Jackson wrote. “Thank you to the boys on this team. I couldn’t imagine a better group to have played with. It’s been an honor to be a part of this incredible Trojan brotherhood and to go to war with you guys every day.”

Phil Mickelson is excited about the future. He’s stronger and fitter than at any point in his career, thanks to a dedicated training and diet regimen. He’s hitting the ball farther than ever. He’s hopeful.

The past, even one filled with 44 PGA Tour victories? The image isn’t entirely favorable.

“When I look back on some of the highlights of tournaments that I’ve won or played well in 15 years ago in my mid-30s, I mean, its embarrassing the way I looked,” Mickelson said Wednesday at PGA West, site of this week’s PGA Tour stop in La Quinta.

“So now I’ve taken a much greater level of accountability and I feel a lot better than I did 15 years ago. ... Can I get the best out of me again? I believe I can.”

The death of Mongolian Groom in the $6-million Breeders’ Cup Classic at Santa Anita on Nov. 2 could have been prevented, according to a report released Wednesday by the Breeders’ Cup.

The report said that 253 horses were evaluated several times and that 24 horses were scratched either in the Breeders’ Cup races or on the undercard of the two-day event out of concern that they weren’t in safe racing condition.

“The examining veterinarians made the right call on 252 horses,” the report said. “That is a 99.6% accuracy rate. The decision was wrong on only one horse: Mongolian Groom.”

No veterinarians were named in the investigation, which also exonerated the Santa Anita track surface as playing any role in Mongolian Groom’s death. It was also said that pre- and post-race toxicology showed no prohibitive substances or medication overages.

According to the report, part of the problem was that Mongolian Groom had preexisting conditions in both hind legs, which makes it more difficult to diagnose because the horse isn’t favoring one of its legs.

Albert Pujols homers in his return to St. Louis and gets a standing ovation. Watch it here.