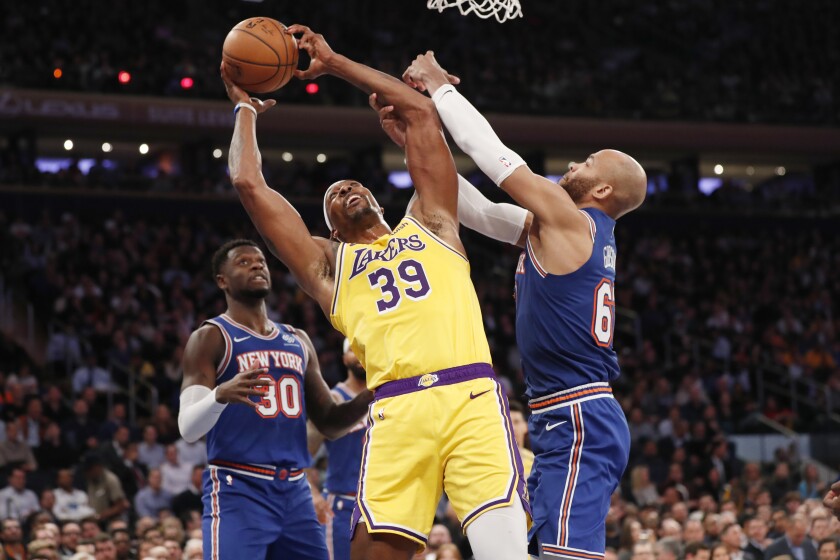 The Sports Report: Lakers get past the Knicks

As the Lakers’ game against the New York Knicks progressed, LeBron James began to realize Anthony Davis needed him. So he stopped looking for his own shot and he started looking for ways to get Davis more comfortable.

The best, most interesting and strangest stories of the day from the L.A. sports scene and beyond.

The result? Twenty-eight points for Davis and a Lakers’ win against the Knicks. The Lakers beat the Knicks 100-92 to improve to 35-9, dropping the Knicks to 12-33 this season. The Lakers will remain in New York to play the Brooklyn Nets on Thursday before finishing their trip in Philadelphia on Saturday.

James had a productive first half, making eight of 10 shots that he took and scoring 19 points. He finished the game with 21. The Lakers also got double digit contributions from Kyle Kuzma and Kentavious Caldwell-Pope.

“I was more of a facilitator in the second half,” James said. “Tried to get AD going. He looked a little out of rhythm in the first half. It was a point of emphasis to me coming into the third quarter and the fourth quarter to get him going.”

It was Davis’s second game back in the Lakers’ lineup since he missed five with a muscle bruise on his backside. In his first, he scored nine points against the Boston Celtics and played 22 minutes. Davis was on a restriction of 28 minutes placed by the Lakers’ medical staff, but the game got so far out of hand that playing him that long wasn’t necessary.

On Wednesday, Davis had no minute restriction, though the Lakers’ medical staff told Lakers coach Frank Vogel they preferred he stay around 30 minutes. It ended up being almost exactly how many minutes Davis played.

“Still trying to get my wind back,” Davis said. “I’m just trying to find a rhythm again within the team’s scheme. I’m not trying to go out there and hunt shots or force anything. Felt good tonight. I was able to get to the free-throw line and see the ball go through the rim, which gave me a lot more confidence.”

Half an hour before tipoff Wednesday in State Farm Arena, Clippers forward Paul George tested the strained left hamstring that has kept him from playing since Jan. 5.

Working from one corner of the three-point arc to the other, he caught passes from assistant coach John Welch before gingerly jumping to shoot, making 11 of his last 12 tries. When the workout was over, he spent 20 minutes near the scorer’s table, talking with Lawrence Frank, the team’s president of basketball operations.

For a team that has played with its full complement for one game in three-plus months, getting the All-Star back on track is a top priority, one that is not to be rushed. But if the Clippers have become begrudgingly accustomed to playing short-handed, Wednesday presented a severe scenario. Not only was George out but Kawhi Leonard sat one night after scoring 36 points in Dallas, as part of his load-management strategy, and starting guard Patrick Beverley (sore right groin) was also sidelined.

The Clippers missed more than three starters though, in a 102-95 defeat to Atlanta in which they blew a 21-point lead and had their winning streak end at four games. They missed 14 free throws and numerous second-half opportunities to shut the door on the Hawks, who were without star Trae Young. Atlanta outscored the Clippers 61-35 in the second half.

Shareef O’Neal announced on Twitter on Wednesday that he was leaving UCLA after only half a season.

“My parents have always taught me that transparency is the best form of communication,” O’Neal wrote on Twitter. “It is in this spirit that I announced today my departure from the University of California Los Angeles.”

O’Neal thanked coaches Steve Alford and Mick Cronin as well as the UCLA medical staff that diagnosed and treated the heart defect that forced him to sit out all of last season.

“A part of my heart will always be at UCLA figuratively and literally,” O’Neal wrote. “I’m looking forward to the next chapter, wherever that may be.”

Every time rookie center Jaret Anderson-Dolan lined up for a draw during his four-game call-up with the Kings last week, Jarret Stoll leaned forward in his chair. He wanted to see how their hard work together would pay off.

“Every time he takes a faceoff in the NHL, and he wins one, I’m so proud,” Stoll said of Anderson-Dolan, one of the players he has worked closest with this season in his role on the Kings’ player development staff. “On the other hand, when he loses one, I’m like, ‘. . . . come on.’ I want him to do so well.”

Four years removed from the end of his 13-year NHL playing career, Stoll is around hockey as much as ever these days — as a Kings player development coach, as an analyst on Fox Sports West Kings broadcasts, and as a front-facing ambassador of the franchise.

Of all his duties, Stoll’s relationships with players — including prospects such as Anderson-Dolan, Matt Luff, Carl Grundstrom and many others — are what he cherishes most.

“We want to see our kids develop,” he said. “That’s what it’s all about. Getting them to the next level and eventually, hopefully, they become full-time NHL players. If they score a goal, or make a nice play, or get an assist, it’s so rewarding for us to see that.”

Alana Beard, the WNBA’s two-time defensive player of the year who finished her career with the Sparks, has played her last game, she said Wednesday on the Tim Fletcher radio show.

Joining Fletcher in her hometown of Shreveport, La., Beard talked about beginning a career in venture capitalism.

“You put me on the spot,” Beard replied to Fletcher when he asked about her retiring. “I’m still working on that.”

Beard went on to discuss her work in educating children on how to swim after starting a program in the aftermath of six Shreveport teenagers drowning in 2010, and looking forward to starting a career in the Silicon Valley to learn about venture capitalism. She has interned at Next Play Capital.

Beard was the No. 2 overall pick out of Duke in the 2004 WNBA draft and was a nine-time WNBA all-defensive player during her 16-year career.

Eli Manning, who led the New York Giants to a pair of Super Bowl victories in his 16 seasons with the team, is retiring from the NFL, the team announced Wednesday.

Manning, 39, is scheduled to formally announce his retirement during a news conference Friday.

“Eli is our only two-time Super Bowl MVP and one of the very best players in our franchise’s history,” Giants co-owner John Mara said in a statement. “He represented our franchise as a consummate professional with dignity and accountability. It meant something to Eli to be the Giants quarterback, and it meant even more to us. We are beyond grateful for his contributions to our organization and look forward to celebrating his induction into the Giants Ring of Honor in the near future.”