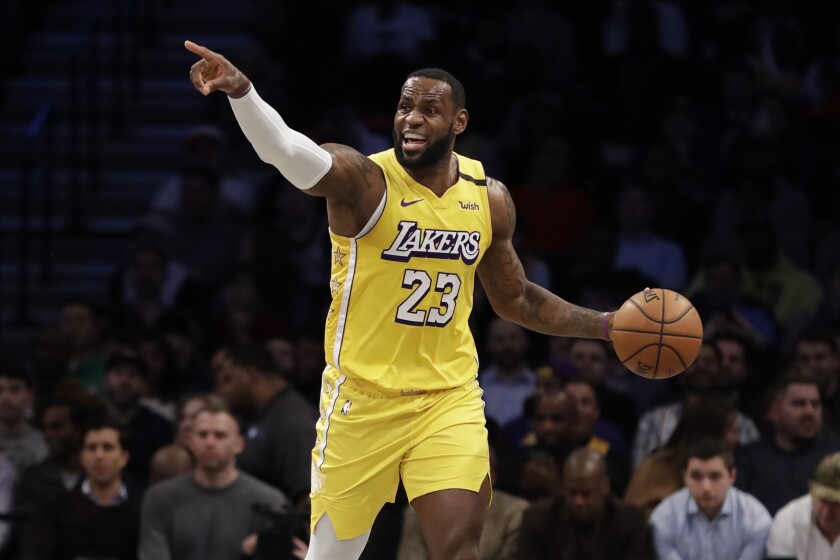 The Sports Report: LeBron moves up the scoring list

In the third quarter of the Lakers’ 108-91 loss to the Philadelphia 76ers, LeBron James did it.

He drove across the lane. In a town where Kobe Bryant spent most of his childhood, in a building where fans once booed the Lakers great, the crowd rose in anticipation of a moment of history.

James made a layup, giving him 18 points in the game. At that moment, he had scored one more point in his career than Bryant had.

“It’s cool to know that you have the support of one of the all-time greats that ever played this game and someone that you admired to be like on the floor,” said James, who finished with 29 points, eight assists and seven rebounds. “And to do the things, winning championships, be young and be remembered.

“Continuing to move the game forward @KingJames,” Bryant said in a tweet. “Much respect my brother.”

Pitcher Ross Stripling was onstage at the Dodgers’ fan festival Saturday, waiting to talk with team broadcaster Nomar Garciaparra. Stripling had to wait longer than he had anticipated, he said, because Garciaparra said something about the Houston Astros, and the crowd erupted into 30 solid seconds of boos.

To those fans that believe the Dodgers came within one game and one cheating opponent of the first World Series parade in Los Angeles since 1988, the pain had not subsided 12 days after Major League Baseball sanctioned the Astros for cheating.

The Astros were fined $5 million, and their owner fired the manager and general manager. But the league did not strip the Astros of the World Series championship they won in 2017, when they beat the Dodgers in seven games, and that has left some Dodgers fans feeling powerless.

Dodgers react to Astros sign-stealing scandal: ‘They cheated. They got away with it’

Onyeka Okongwu shifted the box holding his postgame meal of macaroni and cheese, baked beans and cornbread pudding in one hand so that he could simulate his favorite dunk with the other.

The USC freshman forward stretched his right arm over his head, nearly brushing the exposed pipes in a basement hallway, before ferociously swinging it forward.

“The one-handed one like this,” Okongwu said amid the blur of motion, “that was my favorite one.”

There were other candidates and seemingly no consensus among players and coaches after Okongwu’s three dunks over the game’s final 10 minutes powered the Trojans to a 75-55 victory over Oregon State on Saturday afternoon at Gill Coliseum, providing an emphatic retort to a disheartening double-overtime loss two days earlier.

“Some of the dunks tonight were just spectacular,” USC coach Andy Enfield said. “The first one was good down the lane, and the one about a minute or two later was just ridiculously impressive. He’s a special young man, very explosive, especially with a running start.”

There are two things you should know about Carli Lloyd. The first is, she’s a very, very good soccer player.

The second is she’s even better when she’s angry. And Lloyd was very, very angry last year.

“I don’t think I will ever be happy with how I was treated between 2016 and 2019,” Lloyd wrote in an email interview last week. “I was in the best form of my career but was told I would not be a starter no matter how well or how hard I worked at training or how many goals I score.

“Listening to people label me as too old and that I was better as a super sub was difficult since I knew this was not the case.”

The challenge now is to keep that fire burning through this summer’s Tokyo Olympics, where the U.S. could become the first country to win World Cup and Olympic titles in consecutive years.

The CONCACAF Olympic qualifying tournament begins Tuesday in Texas and if the U.S. finishes in the top two in its four-team group — which includes Costa Rica, Panama and Haiti — it will advance to the semifinals Feb. 7 at Dignity Health Sports Park in Carson.

The final will be played Feb. 9 in Carson. The finalists will advance to Tokyo.

Kings center Anze Kopitar was as excited as a little kid as he held out his All-Star jersey to get the autograph of next-locker neighbor Tomas Hertl of San Jose.

They’re enemies during the NHL season but became buddies this weekend, a friendship cemented by their excellence in leading the Pacific Division to a 5-4 victory over the Atlantic in the finale of the three-on-three All-Star tournament at Enterprise Center. In the spirit of camaraderie, Hertl was happy to grant Kopitar’s request.

“Before, seven years we hate each other, but now we hang out, so it’s all good,” said the Czech-born Hertl, who scored the winner with 2:36 to play to secure the triumph and the $1-million payoff the victors will share.

It’s not often that Kopitar is surrounded by elite finishers and he thrived in that circumstance Saturday, producing three assists in the Pacific team’s 10-5 opening victory over the Central Division and one assist in the finale. Hertl had four goals in the first game, three set up by Kopitar. Their bromance will survive long after the details of this sort-of-hockey exhibition is forgotten.

Like Gauff, Kenin is a young — although, at 21, not quite as young — American and she reached her first major quarterfinal with the victory.

“I just needed to calm down, relax, try my best and fight,” the 14th-seeded Kenin said. “I’m just so speechless.”

In her previous match, the 67th-ranked Gauff beat Naomi Osaka to become the youngest player in the professional era to defeat the reigning women’s champion at the Australian Open.

Next up for Kenin is another first-time Slam quarterfinalist: 78th-ranked Ons Jabeur of Tunisia, a 7-6 (4), 6-1 winner against 27th-seeded Wang Qiang. It was Wang who surprised Serena Williams in the third round.

Also advancing was last year’s runner-up in Melbourne, two-time Wimbledon champion Petra Kvitova, who was down a set and a break before coming back to defeat No. 22 Maria Sakkari 6-7 (4), 6-3, 6-2.

Also, defending champion Novak Djokovic moved into a quarterfinal against No. 32 Milos Raonic.

Nathan Chen, who hasn’t lost an event since he struggled in the 2018 Olympics short program, soared far above the ice — and the competition — to win the short program at the U.S. Figure Skating Championships. His margin is so massive, 114.13 points to 100.99 for second-place Jason Brown, that Chen probably could power skate through Sunday’s free program and still win.

“It was one of my best,” the always understated Chen said, “really calm and paced. I felt in control of everything I was doing in the program.”

That’s how it tends to go for Chen, who is on target to become the first man to win four consecutive U.S. titles since Brian Boitano in 1988. Not even flu-like symptoms that curtailed his training earlier this month, nor the heavy class load at Yale, nor being separated by a continent from his coach, Rafael Arutunian, slows him.

In pairs, Aleza and Chris Knierim won their third U.S. crown even though they finished second in the free skate to Jessica Calalang and Brian Johnson. Ice dance went to Madison Chock and Evan Bates.

Jon Rahm chipped in for birdie and holed out from 111 yards for eagle to start his round Saturday, and he scrambled superbly along the back nine for a seven-under-par 65 at Torrey Pines and a one-stroke lead over Ryan Palmer in the Farmers Insurance Open.

Rahm won his first PGA Tour title three years ago at Torrey Pines when he made a pair of eagles over the last six holes for a 66 to rally from a three-shot deficit. This time, he will try his hand with the lead.

Palmer traded birdies and bogeys most of the day until his 10-foot birdie on the 17th gave him a one-under 71 and his second chance to win in as many starts this year.

Tiger Woods still had fleeting hope of picking up his record 83rd victory, mainly because of a par. Woods got within two of the lead at the turn and didn’t make another birdie in his round of 69. He had to make a 15-foot par on his final hole.

Woods was among 16 players within five shots of the lead.

Southern California racing has been in a bit of a slump lately, winning only one Eclipse Award on Thursday night, but all that was forgotten Saturday when Mucho Gusto won going away in the $3-million Pegasus World Cup Invitational at Gulfstream Park.

The Bob Baffert-trained colt ran a near-perfect race under Irad Ortiz Jr., who was riding him for the first time. The 1 1/8-mile race is a difficult one to win from the outside because of the short run to the first turn. But Ortiz hustled Mucho Gusto out of the eighth gate. From there he settled on the rail in striking distance and by the top of the stretch had a 2 1/2-length lead and won by 4 ½ lengths.

“Irad Ortiz did a pretty masterful job,” Baffert said by phone from Santa Anita. “He had me a little bit worried the way he was down inside like that, but he knew what he was doing. When he tilted out at the quarter-pole, all I could say was ‘Damn, I wish I would have flown down there.’ But it was pretty exciting.”

The race took on a very different complexion when the two favorites, Omaha Beach and Spun To Run scratched out of the race earlier in the week.