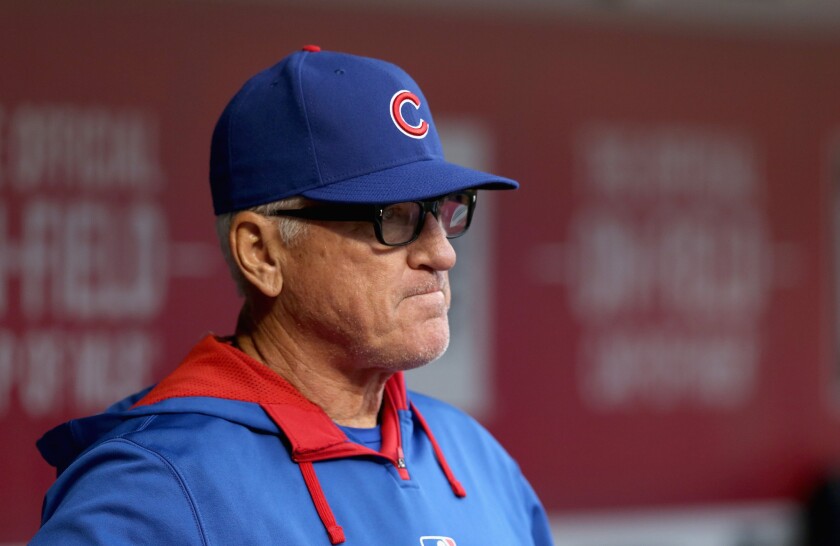 The Sports Report: The Angels have a new manager

World Series-winning manager Joe Maddon, an employee of the Angels from 1975-2005, was hired Wednesday to usher in the next era of October baseball in Anaheim. Maddon’s contract is for three years and $12 million. Buck Showalter, John Farrell and San Diego Padres hitting coach Johnny Washington also were interviewed for the position.

“I could not be more excited to come back home and manage this great organization,” Maddon said. “I’d like to thank Arte Moreno, [general manager] Billy Eppler and [team president] John Carpino for giving me the opportunity to add another chapter to my Angels career. I was lucky enough to be a part of the first Angels team to win a World Series title and I look forward to the opportunity to bring Angel fans their second championship.”

Times columnist Bill Plaschke offers his take on the hire:

A baseball team desperately in need of a baseball story has smartly hired one.

His name is Joe Maddon, and he can’t put on that halo soon enough.

The Angels hired Maddon as their manager Wednesday in a move that should calm a few nerves, restore a little hope, and at least temporarily slow the ugliest of narratives.

A team mired in a drug scandal has brought home a former longtime employee who helped lead them to their only World Series championship.

A team that has been to the playoffs only once in the last 10 years has brought in the guy who managed the Chicago Cubs out of that infamous 108-year title drought.

A team in turmoil has hired the epitome of calm.

Read all of Plaschke’s column by clicking here.

On Nov. 24, 1965, Mobutu Sese Seko, a lieutenant general in the Zairian army, led one of the first documented military coups in Africa.

To maintain his power, Mobutu abolished political parties, used the country’s resources as his personal bank and suppressed all dissenters. And by suppressed I mean imprisoned and/or murdered. Mobutu leveraged his relationship with Western nations, including the United States, to eradicate his enemies. To prop up his lavish lifestyle, he bankrupted his country. He is credited with inspiring the term “kleptocracy.”

In short, if you search the term “oppressive dictator” online, his name can be found as an example.

He also funded one of the most iconic boxing matches of all time, the Rumble in the Jungle. Yes, THE “rumble,” which featured one of the most beloved athlete-activists of all time, Muhammad Ali. The Thrilla in Manila was also backed by a dictator, Ferdinand Marcos, who reportedly stole billions from his people, muzzled the media and ruthlessly targeted political opposition.

I’m not pointing out these transactions in an attempt to tarnish Ali’s legacy.

I’m doing so to reframe the legacy of LeBron James.

Given how he’s carefully crafted his voice on social issues, it’s more than fair to call James out as a hypocrite for his milquetoast response to the controversy regarding the NBA and China.

The reason I bristle is that chastisement of James is based on rewritten history, made to fit a narrative.

Read the rest of Granderson’s column by clicking here.

Some wanted to go elsewhere. Others quit football. A handful headed for the NFL. One moved closer to home. Another was dismissed from the team.

All had something in common: They were no longer playing for UCLA under coach Chip Kelly.

Sixty-three players who had eligibility remaining have departed since Kelly’s arrival in November 2017, complicating his rebuilding efforts and putting the Bruins at risk of possible penalties because of low Academic Progress Rate scores.

Receiver Theo Howard became the latest defector last week, announcing that he was headed for the transfer portal to better position himself for the NFL draft after sitting out most of this season because of hand injuries.

“Some team is getting a special person, family and player,” tweeted Jim Mora, who recruited and coached Howard for two seasons as Kelly’s predecessor. “I’m sad to see yet another top player we recruited leave such a great University.”

Kelly blamed the high number of departures on the quick-fix availability of the transfer portal, allowing those who weren’t playing an easy way out, but significantly more players have left his program than other Pac-12 Conference teams that hired coaches at the same time.

The Bruins (1-5 overall, 1-2 Pac-12), who face Stanford (3-3, 2-2) tonight at Stanford Stadium, might not be struggling so mightily for a second consecutive season had Kelly not lost the equivalent of half a roster.

Helene Elliott on Wednesday’s game: The Ducks’ path back to the playoffs is paved with good intentions they hadn’t been consistently carrying out in the early weeks of this season.

They’re counting on production from the kids they’ve drafted and carefully developed, and they’re expecting the core players who are in their mid-to-late 20s to take the initiative and become leaders. With Corey Perry gone via buyout, Ryan Kesler lost for the season because of a bad hip, and 34-year-old Ryan Getzlaf playing reduced minutes, there’s room for that core to decisively take charge, a task that group couldn’t handle last season.

On Wednesday, the Ducks’ intentions became clear in a 5-2 comeback victory over Buffalo, the Sabres’ first regulation loss in seven games this season. The Ducks blended finesse with rugged play in a surprisingly nasty game, got timely contributions from kids—Sam Steel and Max Comtois each earned his first point of the season on an assist—and benefited when members of that core group made an impact. Adam Henrique scored twice, Rickard Rakell contributed a goal and an assist, Jakob Silfverberg had a goal and two assists, defenseman Josh Manson had two assists and fellow defenseman Cam Fowler had one assist in a strong pushback before an announced crowd of 15,193 at Honda Center.

Emtech, the 3-year-old colt who had a fatal breakdown on the second day of the current Santa Anita meeting, had tested positive for a painkiller about a month before his death.

On Monday, the Santa Anita stewards issued a $1,500 fine against trainer Steve Knapp, who trained Emtech. The horse had tested positive for an above-legal level of phenylbutazone, a nonsteroidal anti-inflammatory, or NSAID, used to treat pain and inflammation. The ruling by the stewards did not say how much over the limit the horse tested.

The test was administered after the colt finished second in the first race on Aug. 25 at Del Mar.

The California Horse Racing Board has instituted a system where before a horse can run a race, an advisory panel has to determine the soundness of the animal, which includes a thorough look at the horse’s past performances and medical history.

The panel was aware of the violation.

“Dr. [Tim] Grande is the official veterinarian on the panel and an examining veterinarian,” said Dr. Rick Arthur, chief equine medical director for the CHRB. “He had interviewed Knapp and discussed Emtech’s Del Mar NSAID violation as part of standard process prior to Emtech’s race on Sept. 28.”

The ALCS schedule was disrupted when rain forecast for Wednesday night prompted Major League Baseball to push back Game 4 to today and Game 5 to Friday in New York. With Game 4 pushed back to today, both teams will employ their Game 1 starters — Zack Greinke (Houston) and Masahiro Tanaka — on regular rest. They also plan to use their Game 2 starters — Justin Verlander and James Paxton — on regular rest for Game 5.

All times Pacific. All games on TBS

All times Pacific. All games on FS1

“On behalf of Patrick’s family, team, and those closest to him, we are grateful for the prayers, expressions of support and outpouring of love for Pat that have been so obvious since his injury,” DiBella said in a statement. “He was a son, brother, and good friend to many. Pat’s kindness, positivity, and generosity of spirit made a lasting impression with everyone he met.”

What is your favorite all-time local sports moment? Email me at [email protected] and tell me what it is and why and it could appear in a future daily sports newsletter or Morning Briefing.

This moment comes from Carol Cling:

My favorite memory has to do with the 2002 World Series.

I was visiting my mom in Fullerton and felt duty-bound to join her and her longtime companion at dinner, which meant missing the sixth game. Things were looking so grim for the Angels anyway, I figured the seemingly inevitable loss would be easier to bear if I didn’t have to watch it.

But, at our favorite Persian restaurant in Anaheim, other Angel diehards were among the diners — including one guy who kept running out to check the score on his car radio. He returned every time with a sorrowful shake of his head. That is, until the moment he burst back into the restaurant screaming “Spiezio just homered! Spiezio just homered!” The entire restaurant erupted in cheers and the owner brought a radio into the dining room so we could all share the amazing comeback together.

I’ve seen video of that game many times (and still have the Dick Enberg-narrated commemorative VHS video of the Angels’ triumphant 2002 season). But in that case, not seeing it — except in the collective mind and heart of everyone in the place — created an indelible memory that still makes me glow.