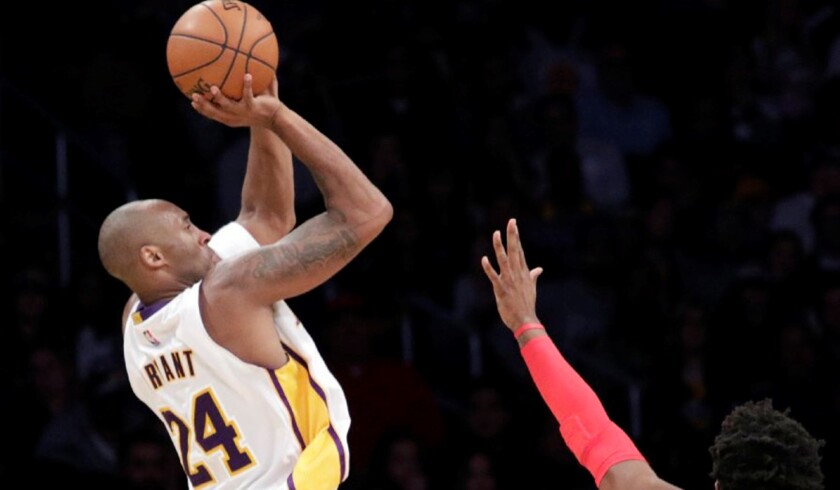 The legacy of ‘Kobe!’ jump shots lives on through fans

It usually happens during a pickup basketball game. A player plants his feet, jumps and shoots with a yell of “Kobe!” -- partly a joke, but also a plea to guide the ball into the hoop with the skill of the late Lakers great Kobe Bryant.

man, we really grew up yelling “KOBE!” when we put up jump shots. Superhero! Such a tragic loss. RIP

It’s just a moment, but it’s a legacy that Bryant has left countless amateur basketball players -- and those folks just trying to throw a wad of paper into a faraway trash can -- around the world.

As the news of Bryant’s death in a helicopter crash on Sunday spread, Twitter users and Times readers from all over shared memories of their “Kobe!” shots: jump shots, trick shots and three-point attempts. Here’s what they had to say (some responses have been lightly edited for clarity).

“The effect Kobe had on anyone that was lucky enough to witness his playing is astounding, and is something that will be forever savored. It is a sad day for the international basketball community due to the widespread love so many had for Kobe, and the love that he returned. It is customary for someone to yell “Kobe” whenever they shoot a trick shot during a basketball game, and although it was initially intended to be a joke, it will take on a deeper meaning from this day on. It is truly a day that will never be forgotten, a day which I am sure no basketball lover will ever forget.”

I’ll be yelling Kobe til the day I die

“Even though I was a Blazers fan from Portland, I could never get enough of Kobe nor could I take my eyes off him when he was playing. Spent so many days shooting hoops growing up yelling “Kobe!” and pretending I was taking the last-second shot like him. I remember my last game working for the Phoenix Suns which was the same day as Kobe’s finale in LA. I left early and drove about 100 mph to catch the second half of the Lakers on TV. Was so happy I got to see him go out scoring 60 points and making one impossible shot after another for one last amazing comeback victory. He rose to the occasion with the spotlight on him as he always did. Reminded me of my childhood wearing his shoes, practicing his moves, and being motivated to wake up early and practice a few extra shots.”

“I don’t watch basketball but I came to know of him when a Vine [video] went around of a kid screaming “Kobe” and shooting something into the trash can. My whole middle school revolved around the “Kobe” shot and how fun it made class. It’s nothing big but all those memories came back today, like this guy is real! And the Vine you worshipped totally surrounded him, and he’s just gone.”

Bruh I don't even play basketball and me and everyone else says "Kobe" when you toss some trash into a trashcan. RIP a legend. 🙏

“I just know that he was one of the faces of basketball, and that anyone named Kobe nowadays is most likely a result of this G.O.A.T.! He was always the basketball player that was at the tip of everyone’s tongue and when we made a 3-pointer, we’d shout “KOBE”! Rest well Kobe and Gianna.”

We all did grow up like that, I grew up almost always making hoops and I always yelled kobe and so did my friends. But now it even hurts to say his name 😭❤️

“The Rockets-Lakers rivalry was very real for us. Part of the excitement was being able to see Kobe execute and be The Black Mamba. Kobe was bigger than basketball. I’ll forever have memories tied to Kobe when playing ball. Every time I hooped, no matter where, without fail somebody would shoot and yell “Kobe!” It’s these memories along with all of his incredible performances that make his passing hurt even worse. RIP Mamba. Your legacy will never die.”

Bro I still do this. I don't think I'll ever stop either. Everytime I do it and someone asks why I'll tell them it's just me continuing to honor the greatness of a legend