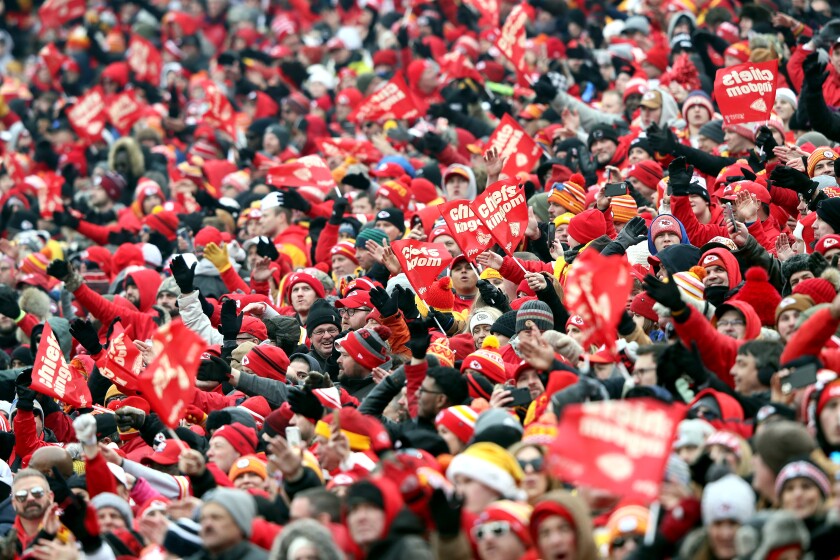 The Kansas City Chiefs have plenty of offensive pyrotechnics.

Just not enough real ones.

Late in Sunday’s 51-31 divisional playoff victory over the Houston Texans, the Chiefs posted a message to their fans on the Arrowhead Stadium video boards.

“Chiefs fans,” it read, “we are sorry to report but, due to your support and the Chiefs continually finding the endzone, we have run out of touchdown fireworks. Please direct all of your complaints to your nearest fans first booth.”

There’s obviously a touch of trolling to that alert, but it’s entirely conceivable that the team could have exhausted its supply. Kansas City, which roared back from a 24-0 deficit, set an NFL postseason record with touchdowns on seven consecutive drives (followed by a field goal on the eighth). It was the biggest comeback in club history.

#Chiefs announced on their video screen at Arrowhead Stadium that they have run out of touchdown fireworks for the night. (via @AlexGold) pic.twitter.com/WWufgkq1s6

“I didn’t know that until this morning,” coach Andy Reid said sheepishly of the depleted supply of fireworks. “I guess that’s a good thing.”

The weather wasn’t fair on that frigid afternoon, but there were some fair-weather Chiefs fans. One of them, a retired executive of a shipping company, agreed to tell his story of leaving the game to The Times on the condition of anonymity. He was too embarrassed to use his name, and said he didn’t want to tell his wife, who owns the tickets.

“They were down 24-0, and I told my buddy of mine I was with — we had club-level seats, great seats — I said, ‘Let’s go. I’m not going to sit here and watch this nightmare,’ ” he said. “I said, ‘We’ll go to a sports bar, and we’ll sit there and eat some barbecue, and drool in our cocktails.’ So out we go, and we hear all this roaring and cheering and all this stuff. The Chiefs had scored.”

It was great timing for the fickle fans, because there’s no reentry at Arrowhead once you’ve left the stadium. The two scrambled back to their seats ... and witnessed the comeback.

“We’re in the club seats, and we don’t have a suite, but the suite just to the right of us was full of Houston Texan executives. They’re all cheering. I’ve got rabbit ears, so I’m hearing all this stuff. I’m about to walk up there. My friend says, ‘You can’t walk up there, you’ll get us thrown out of here.’ So at the end of the game we walk out and they have about four or five police officers in front of the door to their suite.

“I asked a police officer, ‘Can I go in there? I want to ask how they enjoy their crow they’re going to have to eat.’ And he says, ‘No, sir. Enjoy the victory. You have a nice day and behave yourself.’

“The lesson for me as far as the Chiefs go is, it’s not over until the fat lady sings. But she was warming up [Sunday], she was saying, ‘Mi-mi-mi …’ ”