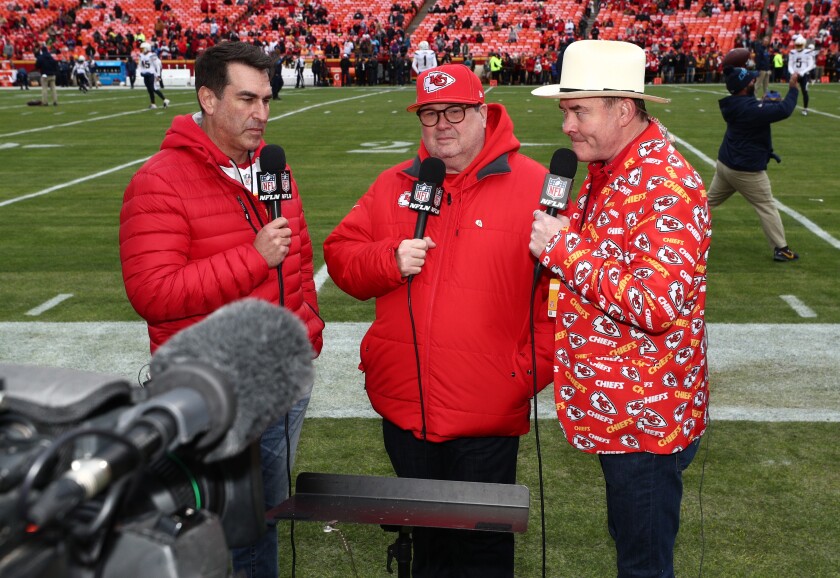 The door of the Kansas City Chiefs locker room swung open after a recent victory, and in stepped comic actor David Koechner. He was wearing a straw Stetson, cowboy boots made from the skin of an Amazonian fish and a sport coat as loud as Arrowhead Stadium itself — electric red and splattered with dozens of Chiefs logos.

The lifelong Chiefs fan caused a small stir in the locker room, where players recognized him as “Champ Kind,” the hilariously pea-brained, “Whammy!”-shouting sportscaster from the “Anchorman” movies. But this time, it was Koechner who was starry-eyed.

“There were some double-takes, with guys like, ‘Oh, no, it’s Champ! Champ Kind’s down here!’” said Koechner, who grew up in tiny Tipton, Mo. “I was just thrilled. I was like, ‘Wait, they know who I am?’”

They sure do. Koechner is part of a cadre of comedians and actors who grew up in the region and are die-hard fans of the Chiefs, among them Eric Stonestreet, Rob Riggle, Paul Rudd and Jason Sudeikis. Several are expected to be in attendance Sunday when Kansas City hosts Houston in a divisional playoff game, and their combined IMDb credits list is as long as a Patrick Mahomes deep ball: “The Office,” “Modern Family,” “Friends,” “Talladega Nights,” “Step Brothers,” “Clueless,” “Saturday Night Live,” and on and on.

Second seed on the field, Second City on the sideline.

“It’s hard to explain,” said Riggle, whose many credits include the Taser-happy police officer in “The Hangover.” “There must have been something in the water in Kansas City back in the ‘80s. You have Rudd, Stonestreet, Koechner, Sudeikis, me, all from Kansas City, and we all love our teams. We’re all passionate Royals fans, passionate Chiefs fans, wish we still had our Kings.

“We love our collegiate teams too. We all differ on that — there’s K-State, KU, MU — but that’s OK, that’s what makes it fun. Saturdays, we don’t talk to each other. Sundays, we all come back and talk to each other again.”

Despite Riggle’s theory, not all of them grew up in Kansas City proper, and they all now live on the coasts. Stonestreet, who plays Cam on “Modern Family,” lives in Los Angeles but is a Chiefs season-ticket holder and makes frequent trips back to Kansas City to visit his girlfriend and attend games.

Stonestreet was raised in Manhattan, Kan., a two-hour drive west of Kansas City. When he was a kid, he coaxed his parents into buying him season tickets to the Chiefs.

“I was home sick from school one day and I saw a commercial for season-ticket sales,” he said. “They used to have a no-alcohol section, and I thought that was a way to get my dad to buy season tickets for me. So I called him at his store — I still remember the call — and asked him. Sure enough, we got two season tickets on the aisle. So those were my seats from my junior year of high school all the way through my years at Kansas State.”

His clout with the team has grown. He’s now on the sideline before games and friends with some of the Chiefs, though he’s still in disbelief when some of the star players recognize him. Defensive end Frank Clark jogged past him and said hello before the season finale against the Chargers, and Stonestreet smiled broadly.

Stonestreet and right tackle Mitchell Schwartz have struck up a friendship over the years.

“It’s always fun to see these guys walking through the locker room, and to see the reaction of some of the younger players,” Schwartz said. “They’re like, `'Hold on, is that … ?’ It’s like, ‘Dude, you’re on TV and about 50 million people just watched you play.’ But they’re just starstruck.”

These comedians, a collision-loving Splat Pack, appreciate everything about Chiefs games, and it’s not just about what happens in the venerable stadium.

“You pull into Arrowhead, and John Madden was right, it’s the best-smelling stadium in the NFL,” Stonestreet said. “It’s fun to pull in, roll down the windows, and take a whiff. Just the charcoal grills. Some people are just using them to stay warm.”

These rib-ticklers are devoted to this rib-loving city. They have raised more than $6 million for Children’s Mercy Hospital with their annual Big Slick Celebrity Weekend, which includes a softball game, bowling tournament and fundraising auction.

“K.C. fans are the best,” said Riggle, a regular on “Fox NFL Sunday.” “[Actress] Judy Greer had a great quote about what celebrity is: a never-ending series of awkward encounters. The folks here in Kansas City, generally speaking, they don’t make it awkward. They’re like, ‘Hey, Rob, I really like your work, man.’ You exchange some small-talk, maybe take a selfie, and we’re out.”

The Chiefs might not be able to raise the temperature on those bitterly cold game days deep in the season, but they certainly have raised the expectations of a fan base that hasn’t celebrated a Super Bowl victory since Hank Stram’s team matriculated the ball downfield in early 1970.

“Kansas City is a place that rallies around its teams,” Stonestreet said. “We’ve rallied around some good teams in the past, but I feel like everyone in the city feels like we’re on the brink of a different era right now. It’s not that defeated feeling going into games like it used to be, where you’re like, '`Well, we’re probably going to lose, but we’ll do our best.’

“Now the feeling is, with Patrick Mahomes at quarterback and the leadership of [coach] Andy Reid and [general manager] Brett Veach, we’re a viable contender for the foreseeable future.”

Koechner is so confident that he’s currently having a new retina-burning sports coat made that he hopes to unveil at the Super Bowl in Miami.

Call them K.C. and the Sunshine Band.