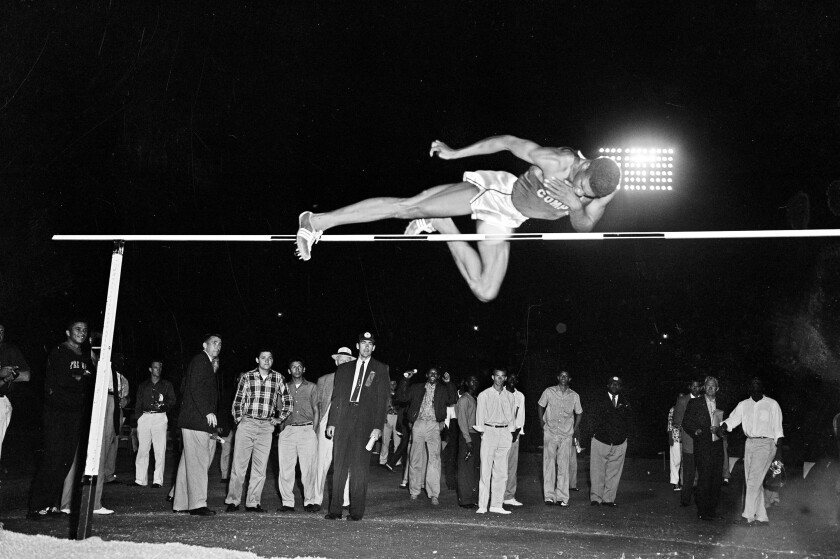 This day in sports: Charles Dumas jumps into the record books

Charles Dumas, a 19-year-old freshman at Compton College, raised the bar on the high jump record on this date in 1956 when he became the first person to clear 7 feet, jumping 7 feet, 5/8 inches at the U.S. Olympic trials at the Coliseum.

The breakaway height in the competition was 6-9 1/2. Dumas, Vern Wilson of the Santa Clara Valley Youth Village and Phil Reavis of Villanova all cleared the height and made the Olympic team.

Dumas asked that the bar be raised to 7 feet, but was advised by Wilson to put it higher than seven.

After Dumas had landed on his back in the pit of sawdust, he saw the bar quivering because he had ticked it with his foot, and he held his breath. But the quivering stopped, and the bar stayed.

“I had two extremely close misses at seven the week before at the AAU meet in Bakersfield,” Dumas said. “I knew I was jumping well enough to get it in L.A.”

In baseball games scheduled this week, the Dodgers were set to play the Cincinnati Reds on Monday in Beach Cooler Bag night at Dodger Stadium. The Angels would have continued their trip by opening a series in St. Petersburg, Fla., with the Tampa Bay Rays.

Young fighters such as Vergil Ortiz Jr. have missed out on chances to raise their profiles, while top star Canelo Alvarez might be further sidelined.

Here is a look at memorable games and outstanding sports performances on this date:

1933 — Primo Carnera of Italy, nicknamed the “Ambling Alp,” knocks out Jack Sharkey in the sixth round at the Long Island City Bowl in New York to win the world heavyweight title. Carnera, at 6 foot 6, has a weight advantage of 60 pounds and his reach is 5 1/2 inches longer than Sharkey’s.

1957 — Jackie Pung loses the U.S. Women’s Open at Winged Foot Golf Club in Mamaroneck, N.Y., when she signs an incorrect scorecard. Betsy Rawls is declared the winner. Pung’s playing partner, Betty Jameson, marks a par on the par-five fourth hole instead of a bogey six. Pung makes the same mistake on Jameson’s card, who is also disqualified. For Rawls, it is her fourth of eight major championships.

1986 — Argentina withstands West Germany’s comeback to win the World Cup 3-2 before 114,200 fans at Azteca Stadium in Mexico City. The Argentines take a 2-0 lead on Jorge Valdano’s goal 10 minutes into the second half. Karl-Heinz Rummenigge and Rudi Voller score seven minutes apart for West Germany, with Voller’s goal tying the score in the 81st minute. Four minutes later Jorge Burruchaga scored the game-winner after receiving a superb pass from Diego Maradona.

1990 — Dave Stewart of the Oakland Athletics pitches the first of two no-hitters on this day, beating the Blue Jays in Toronto 5-0. The Dodgers’ Fernando Valenzuela duplicates Stewart’s effort, throwing a 6-0 no-hitter against the St. Louis Cardinals at Dodger Stadium. It is the first time in major league history two no-hitters are pitched in the two leagues on the same day.

1994 — Martina Navratilova sets a Wimbledon record when she plays in her 266th career match. Navratilova passes Billie Jean King’s record of 265 when she and Manon Bollegraf of the Netherlands beat Ingelise Driehuis and Maja Murić 6-4, 6-2 in a doubles quarterfinal.

2001 — Russian swimmer Roman Sludnov is the first person to swim the 100-meter breaststroke in under one minute, when he breaks a world record for a second time in two days at the national championships in Moscow. Sludnov’s time is 59.97 seconds, and it comes a day after he tops the world record at 1:00.26.

2004 — Randy Johnson of the Arizona Diamondbacks is the fourth pitcher to record 4,000 strikeouts when he fans San Diego’s Jeff Cirillo in the eighth inning of the Padres’ 3-2 win. Johnson, known as “The Big Unit,” recorded 4,875 strikeouts in his career, second only to Nolan Ryan‘s 5,714.

2007 — After 16 years in Europe, the NFL shuts down its developmental league known at the end as NFL Europa. At the time of the disbandment there are six teams in the league, five in Germany and one in the Netherlands. It was originally founded in 1991 as the World League of American Football, with its games to be played in a spring season.

2012 — The U.S. Anti-Doping Agency files formal charges against Lance Armstrong, accusing the seven-time Tour de France winner of using performance-enhancing drugs throughout the height of his career. Armstrong denies the allegations that he doped while dominating cycling from 1999 to 2005, citing hundreds of negative drug tests in his defense.