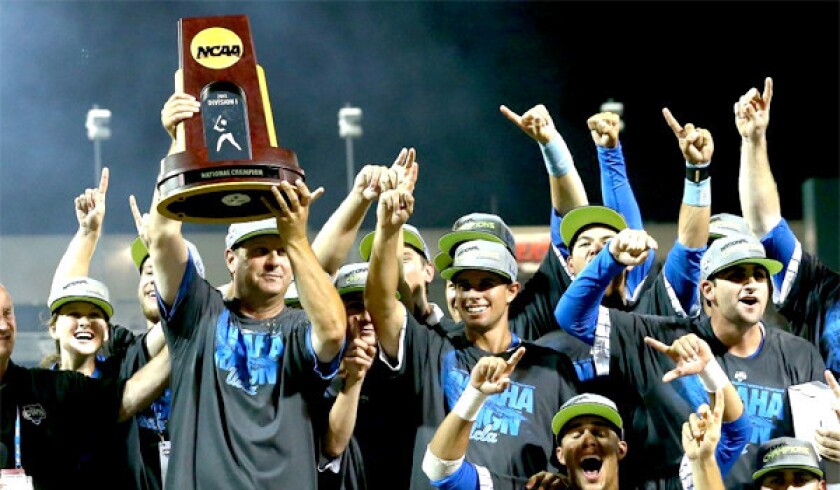 UCLA completed a special season when the Bruins won their first national championship in baseball on this date in 2013 with an 8-0 shutout at the College World Series over Mississippi State at Rosenblatt Stadium in Omaha, Neb.

Nick Vander Tuig limited the powerful Mississippi State lineup to five hits and a walk over eight innings. He improved his record to 14-4. In five CWS games, Bruins pitchers combined for a 0.80 earned-run average, a record low in the aluminum bat era.

Eric Filia had five runs batted in on a sacrifice fly, a sacrifice bunt, a grounder up the middle and two on a single to right field.

“We are not going to hit a bunch of home runs, but we grind out at-bats, work counts, fight off good pitches, hit pitches we can hit,” Filia said. “The whole time that’s what we did, and we did a great job of it.”

A look at what happened today in sports history.

Other memorable games and outstanding sports performances on this date:

1926 — Bobby Jones is the first amateur since Harold Hilton in 1897 to win the British Open. Jones finishes with a four-round total of 291 for a two-stroke victory over Al Watrous at Royal Lytham & St Annes Golf Club in England. It is Jones’ first of three British Open titles and also the first time an admission fee is charged to the tournament’s spectators.

1948 — An aging Joe Louis, 34, knocks out “Jersey Joe” Walcott in the 11th round before more than 42,000 at Yankee Stadium in New York to retain his world heavyweight title. Louis is knocked down in the third round and trails on points in the late rounds, but he lands a powerful right hand to Walcott’s jaw in the 11th that puts the challenger on the canvas.

1966 — Buckpasser sets a world record in the Arlington Classic when he runs the mile-long race at Arlington Park in Chicago in 1:32 3/5 to become the first 3-year-old to win more than $1 million. Impressive sets a torrid pace but Buckpasser runs him down at the quarter pole and draws clear to set the record for a dirt-track course.

1969 — Pancho Gonzales, 41, wins the longest tennis match up to that time at Wimbledon by beating Charles Pasarell in a 112-game marathon, 22-24, 1-6, 16-14, 6-3, 11-9. The first-round gala is played over two days and lasts 5 hours 12 minutes, and it provides the impetus for the introduction of a tiebreaker rule two years later, the tournament’s first scoring change in 94 years.

1978 — Under the pall of a dictatorial government established by a military junta, host Argentina wins the FIFA World Cup championship when it beats the Netherlands 3-1 after extra time at Monumental Stadium in Buenos Aires. Mario Kempes scores two goals to lead Argentina to its first World Cup title.

1999 — The San Antonio Spurs win their first NBA championship when they defeat the New York Knicks 78-77 in Game 5 of the Finals. The Spurs, led by series most valuable player Tim Duncan, is the first former American Basketball Assn. club to win the NBA title. Duncan scores 31 points and center David Robinson adds 15 to go along with 12 rebounds. Latrell Sprewell is New York’s top scorer with 35 points.

A look at what happened in sports history on May 7, including the Lakers’ first NBA title in Los Angeles.

2006 — Bernard Lagat is the first runner in history to sweep the 1,500-meter and 5,000-meter races at the U.S. outdoor track and field championships. Lagat starts his unprecedented double feat when he wins the 1,500 in 3 minutes 39.29 seconds in Indianapolis. The former NCAA champion from Washington State comes back in the evening to take the 5,000.

2008 — Fresno State wins its first national championship in a men’s sport with a 6-1 victory over Georgia in the finals of the College World Series at Rosenblatt Stadium in Omaha, Neb. Right-fielder Steve Detwiler, who is playing with a torn ligament in his left thumb, hits two home runs and drives in all six of the Bulldogs’ runs.

2012 — Five-time champion Venus Williams loses in the opening round at Wimbledon for the first time since 1997, falling in straight sets 6-1, 6-3 to Elena Vesnina of Russia. Williams, who has trouble establishing her serve, hadn’t lost in the first round at any Grand Slam tournament in 6½ years.