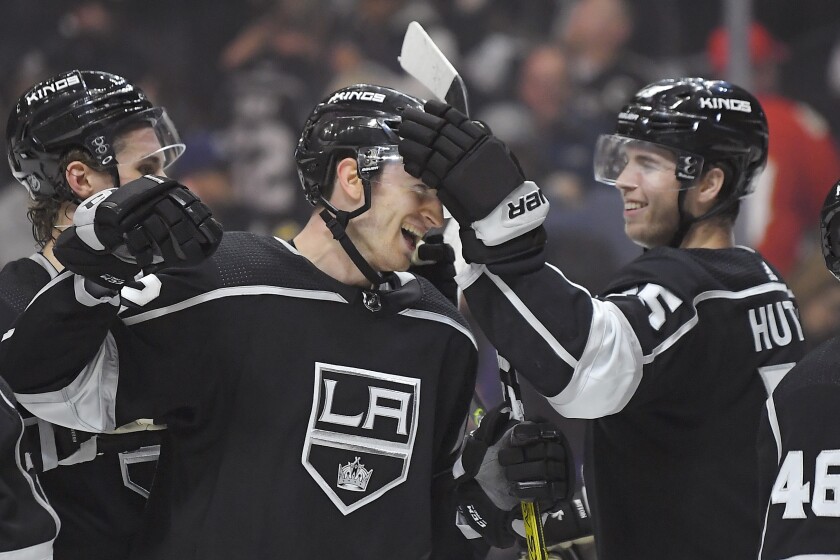 The Kings rookie dozed off for a little while, drifting into a shallow sleep for an hour or two. But then the butterflies came back. After years of waiting, his NHL debut couldn’t come fast enough.

“I was so nervous,” Vilardi said, laughing at himself from his locker late Thursday night.

As it turned out, he had no reason to be. In the Kings’ 5-4 win over the Florida Panthers, Vilardi scored a goal on his first shift, assisted on another in the second period, played key minutes down the stretch and was named the game’s first star.

“To have him play tonight, everybody was excited,” coach Todd McLellan said. “The enthusiasm was contagious.”

To better understand his impressive introduction, here are three plays that defined a night Vilardi will never forget, a trio of snapshots that captured the potential that might be lying in the prospect’s future:

During the national anthem before the game Thursday, McLellan caught a glimpse of Vilardi on the bench.

A year ago, the first-year Kings coach wouldn’t have been able to pick Vilardi out of a crowd. When he was hired by the franchise in April, he only knew the 20-year-old center’s backstory: A former 11th overall pick whose pathway to the pros was detoured by a yearlong back injury.

“He’s ... had a different path,” McLellan said. “Quite often as a first-rounder, you’re given every opportunity. He had to go work for his, because of injury. There were some days where he and others wondered if he’d ever play again.”

As the anthem finished, McLellan wanted to know what Vilardi was thinking. He figured Vilardi was nervous and expected he might need a few shifts to settle in. He was wrong. Moments after stepping on NHL ice for the first time, Vilardi was celebrating his first career goal.

Kings defenseman Kurtis MacDermid “laid it off for me, I took it, and the D kind of backed off a bit,” Vilardi said. “I had some space, took the space, and shot it.”

It was hardly a thing of beauty. Vilardi’s stick was deflected on the release, sending the shot on an odd trajectory that fooled Panthers goalie Sergei Bobrovsky and slipped under his glove arm.

It didn’t matter how it looked, though. The fact the goal happened showed Vilardi’s composure.

“I think he was nervous,” McLellan said, “but he played like a calm player.”

Vilardi’s other best chance in his debut started at the faceoff dot, perhaps his area of greatest dominance Thursday. Of his 16 draws, the 6-foot-2, 201-pound centerman won 13. Midway through the second period, he nearly turned one neutral zone faceoff win into a second goal.

After knocking the puck back to defenseman Drew Doughty, Vilardi broke toward the blue line and positioned himself to enter the zone. At first, he wasn’t near the play as linemate Martin Frk’s dump-in circled behind the Panthers’ net and up the far-side boards.

But Vilardi anticipated where to go, swooping behind the net and back toward the top of the circle as the puck reached the blue line. When Derek Forbort held it in, Vilardi was in the perfect spot. His quick hands and a lethal shot took over from there, forcing Bobrovsky into a high blocker save from the slot.

“He worked his way into positions on the ice that he needed to get to, calmly,” McLellan said. “Sometimes, I think when a player starts his career out, he’s just flying all over the place without any type of purpose. Gabe had purpose in all of his shifts. He did a good job.”

For many of Vilardi’s 32 minor-league games with the Ontario Reign this season, Frk played alongside him. They instantly developed a rapport. It translated to the NHL on Thursday night.

Once Vilardi sped behind the net late in the second period, Frk knew exactly where to go.

Martin Frk puts home the Vilardi dish to push the Kings back into the lead!#GoKingsGo pic.twitter.com/aJvzx3wPHg

The Kings’ fourth goal began in the neutral zone, as Vilardi carried the puck across the blue line. Moments later, he was parked in front when defenseman Matt Roy gained possession at the point. With no clear shooting lane to the net, Roy instead wrapped it around the boards.

Vilardi read the play and circled behind the net as Frk slashed toward the slot.

“I just went there because we did this play so many times in Ontario,” Frk said. “I know what he’s going to do.”

Without looking, Vilardi put a backhand pass on Frk’s tape, allowing the sharpshooter to snap a shot into the upper corner. In the celebration, Frk raced to embrace Vilardi, a player he came to respect this season by watching his hard-fought return to health.

“It was probably tough for him, because he was injured,” Frk said. “Coming into game shape and all that took him time in Ontario. But he’s been the best player down there. He’s a really smart player. He’s got the skills. He knows where to be. He knows where to open up. He can find you on a nice backdoor pass. He did very well tonight.”

The assist showcased Vilardi’s best assets: His vision to reach the loose puck on time. His awareness to know that Frk would get in front of the net. His superior puck play and quick hands. His even quicker ability to make the right decisions.

“His IQ, his sense of time and space and arriving into that time and space was really good tonight,” McLellan said. “We think that will continue on.”