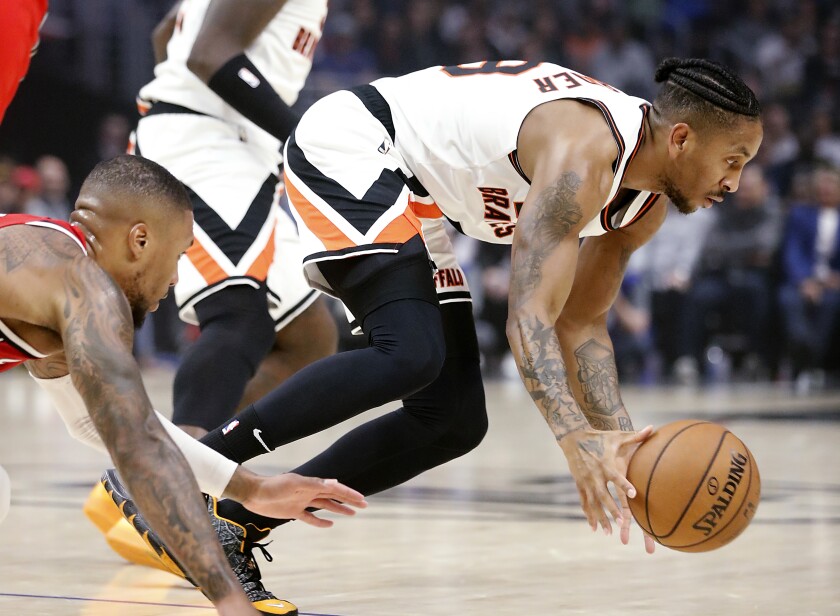 In a league where three-point shooting has exploded, not making shots from deep is an instant red flag.

Since the start of last season, teams have made four or fewer three-pointers in a game 46 times. Only seven times did they win. So when the Clippers made only four of 23 Thursday yet beat Portland, 107-101, backup center Montrezl Harrell took it as a sign.

“It shows our will,” Harrell said.

It also showed the latest example why so many around the Clippers are pleased nine games into the season.

Despite the NBA’s third-worst three-point accuracy over the last five games, a starting lineup that has fallen victim to slow starts and an injury to the patella tendon in Kawhi Leonard’s left knee that has kept the superstar from playing on consecutive nights, the Clippers mostly have weathered an opening stretch that was expected to be one of their toughest, considering Paul George has not played a minute while recovering from offseason shoulder surgeries.

The Clippers have not played their best. Nevertheless, they have the NBA‘s eighth-best net rating and a 6-3 record against a schedule rated by ESPN as the league’s second toughest.

“If you can win a game and not play well offensively, that says a lot about your team,” coach Doc Rivers said.

Added forward Patrick Patterson: “And pretty soon, we add Paul into the mix.”

For the Clippers, the cavalry coming soon is the 6-foot-9 George, who still plans to participate in his most “live” competition of the season at Saturday’s practice, with the hope that the five-time All-NBA forward could make his Clippers debut sometime in the coming week. The team hosts Toronto on Monday, visits Houston on Wednesday and New Orleans on Thursday, then returns home to face Atlanta on Saturday.

George’s addition is expected to smooth out some of the Clippers’ rougher edges.

First of all, with career averages of 19.8 points and 37.8% three-point shooting, plus four NBA All-Defensive team honors, George can help prevent the steep drop-offs that have occurred whenever Leonard rests, assuming Rivers staggers playing time to keep at least one star always on the court.

Second, George is another option to either knock down shots or find teammates for open looks, removing some of the burden that has fallen to veteran guard Lou Williams whenever Leonard is out. George also is coming off a season in which he averaged a career-best 2.2 steals and can help stabilize the defense.

Of course, caution is required upon George’s return. If Rivers implements the so-called “sliding lineup” he discussed during training camp, in which Leonard and George would be constants and be surrounded by different teammates based on the opponent, then a transition period will begin as roles are redefined.

Rivers previously said forward Maurice Harkless, a reserve thus far, fits best alongside the Clippers’ star duo because of his similar skill-set as a long, switchable defender. If that holds, then the team’s most-used lineup could be shaken up, with George and Harkless potentially unseating shooting guard Landry Shamet and forward Patrick Patterson among starters.

Finally, George also will alter how the Clippers close games.

After the Trail Blazers’ backcourt of Damian Lillard and C.J. McCollum combined to make nine of 16 third-quarter shots, the duo attempted only one shot in the paint and scored zero points in the final 12 minutes. To that defense, the Clippers are eager to add George and his 6-foot-11 wingspan.

The Clippers already boast the NBA’s top offensive rating in clutch situations, with Leonard and Williams combining to average 18.6 fourth-quarter points per game.

“That Lou and [Leonard] combination down the stretch was lethal,” Rivers said after the win over Portland.

George’s offensive threat would keep defenses from loading up to stop either teammate.

And soon, there will be three.