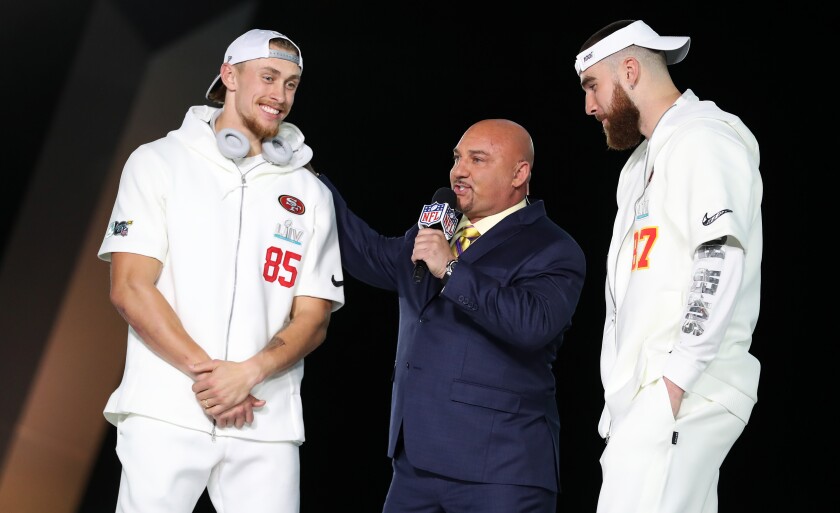 The two players wearing the widest grins throughout Super Bowl LIV on Sunday will probably be tight ends Travis Kelce and George Kittle.

“It’s awesome for the position to finally get a lot more recognition than we typically had,” Kelce said. “It’s something that’s been evolving over the years. ... We’re proud to be tight ends, right, and at the same time we’re just happy for each other. That’s the coolest part.”

Kelce, 30, played in college at Cincinnati and was a Chiefs’ third-round pick in the 2013 draft. The five-time Pro Bowl selection caught 97 passes this season, five for touchdowns.

Kittle, 26, played at Iowa and was chosen in the fifth round in 2017 by the 49ers. The two-time Pro Bowl selection had 85 catches this season, five for touchdowns.

“Me and Kelce are the lucky ones who get to play in the Super Bowl,” Kittle said. “But there a lot of good tight ends right now. I think teams are realizing, ‘Hey, if you have a dominant tight end, it can open up a lot of other things.’ ”

Kelce, 6 feet 5 and 260 pounds, is among the NFL’s most animated players. His outgoing personality makes him fun to be with “and at times you have to learn to temper it,” Chiefs tight ends coach Tom Melvin said.

“A big part of what coach tells everybody is, ‘Let your personality show,’ ” Melvin said. “I mean, that’s part of what makes you a great football player is your personality. So you’ve got to harness it but certainly don’t tap it down so much that it takes away from your natural God-given talent.”

The 6-4, 250-pound Kittle has been watching Kelce since his junior season at Iowa.

“I did homework assignments on him for my college coach,” Kittle said, adding that he considers Kelce the best red-zone threat in the NFL.

“When I was in college and I saw Travis Kelce out there getting fined because of his touchdown celebrations, I was like, ‘That’s awesome. I could do that,’ ” Kittle said. “You can be yourself and still be a great tight end. You don’t have to be this hard-nosed guy who doesn’t have fun out there.

“You can express yourself. You can have a good time.”

The 49ers opened the season by beating four opponents that would go on to have non-winning records.

But it was in Week 6, when the 49ers traveled to Los Angeles to play the Rams, that they say the possibilities of a Super-type season first became evident.

“I felt after the bye week, going down to L.A., I think it was our [fifth] game, beating the Rams …” 49ers coach Kyle Shanahan said. “Yeah, I’d say it started out with that game.”

The Rams were struggling at the time, having lost two in a row to fall to 3-2, but they were still the defending NFC champions.

The 49ers limited quarterback Jared Goff to 78 yards passing and the Rams to 157 yards. The 49ers controlled the ball for nearly 39 minutes and scored the final 20 points.

“That was a big game for us,” quarterback Jimmy Garoppolo said. “We’ve had a lot of big games, but just a division opponent at their place … and the way everyone played and the way the defense dominated made for a really fun afternoon.”

The Chiefs made some key additions to their defense before the season, perhaps none more important than signing versatile safety Tyrann Mathieu to a three-year, $42-million contract.

In stints with the Arizona Cardinals, Houston Texans and now the Chiefs, Mathieu has developed into respected leader on the field and in the meeting room.

“I’ve always been a front-of-the-row guy,” Mathieu said, though it took him a while to get there.

“I feel like I’ve been inching my way closer as I got older,” he said. “I can remember my first year in Arizona I sat in like the third row. ...

“Sitting in front of the room obviously gives you an advantage, makes you feel like you’re more involved in the process. Teammates look forward to that and you could see those guys scooting up as well.

“For me, just trying to be a positive reflection really of all the guys that tried their best to lead me and show me the right way.”