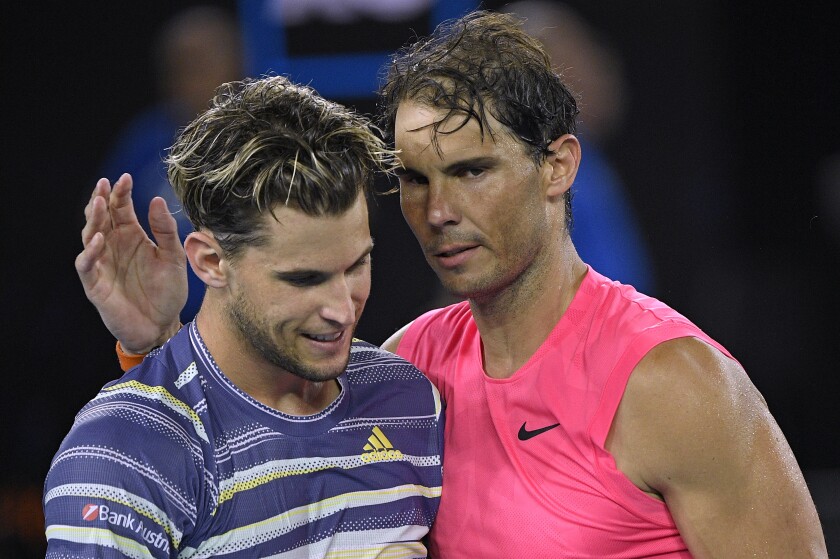 Outplayed at his own brand of physical tennis for much of the match, Rafael Nadal finally claimed a set to try to start a comeback against Dominic Thiem.

Nadal marked the moment by hopping in a crouch at the baseline and vigorously pumping his right arm four times.

Soon, though, he was back in trouble. And eventually, his bid to tie Roger Federer’s record of 20 Grand Slam titles by winning the Australian Open was over with a quarterfinal loss Wednesday to Thiem — a younger version of Nadal himself.

Thiem’s 7-6 (3), 7-6 (4), 4-6, 7-6 (6) victory over the top-seeded Nadal lasted 4 hours, 10 minutes because of so many lengthy, electrifying points. One rather memorable one featured Thiem stumbling onto his backside before popping up and keeping the ball in play until Nadal made a mistake.

“He’s playing with a lot of energy ... (and) determination. So well done for him,” Nadal said. “I honestly didn’t play a bad match.”

Thiem reached his fifth major semifinal but first somewhere other than at the French Open, the place that is Nadal’s domain.

Of more significance: The outcome ended Nadal’s career-best streak of making at least the semifinals at seven consecutive Grand Slam tournaments, a span during which he earned three trophies to narrow his gap with Federer.

“He is one of the greatest of all-time, one of this sport’s biggest legends,” the fifth-seeded Thiem said about Nadal.

The last time Nadal didn’t get to the final four at a major? Also at the Australian Open, where he also went out in the quarterfinals two years ago before finishing as the runner-up to Novak Djokovic in 2019.

That was Nadal’s fourth defeat in a final at Melbourne Park since he won his lone title at the place in 2009. He’s won two at Wimbledon, four at the U.S. Open and 12 at the French Open.

Thiem had been 0-5 against Nadal at the majors, including losses in the final at Roland Garros each of the past two years.

But this one was different. The defining statistic: Thiem won exactly twice as many points that featured nine or more shots, 24-12.

Thiem managed to hang in there with Nadal on physical baseline exchanges, trading groundstroke for groundstroke and picking the proper spots to move forward.

Or to describe it another way: Thiem was out-Nadal-ing Nadal, the ultimate grinder who never met a point that was too long or too grueling.

“Even from difficult positions,” Nadal said, praising Thiem’s quickness and power, “he was able to produce amazing shots.”

Now Thiem will play No. 7 Alexander Zverev on Friday for a berth in the title match.

So instead of Nadal, 33, against Wawrinka, 34, it’ll be Zverev, 22, against Thiem, 26, a couple of members of the new generation trying to collect a breakthrough Slam title.

“I think it’s the first time I am playing a Grand Slam semifinal and I am the older player,” Thiem said with a chuckle.

The first two sets Wednesday sets were remarkably similar: Nadal would go up by a break, then Thiem would break back and take it in a tiebreaker. The first lasted 67 minutes, the second 69.

Nadal was flustered by a warning from chair umpire Aurelie Tourte for a time violation, citing him for taking more than the allotted 25 seconds before serving. Nadal termed the call “amazing,” complaining that the previous point was comprised of an exhausting 19 shots and so the clock shouldn’t have started when it did (something which is at the chair umpire’s discretion).

Later, he gave Tourte a sarcastic thumb’s up after she told him he hesitated too long before trying to challenge a line call.

Thiem’s biggest hiccups came as the end was near.

There was the break that ceded the third set, the one celebrated so enthusiastically by Nadal.

There was another break when Thiem served for the victory at 5-4 in the fourth but was undone by a series of jitters-induced mistakes. There were three off-the-mark forehands, with a double-fault mixed in for good measure.

Then, on his first match point, at 6-4 in the last tiebreaker, Thiem drove a leaping forehand into the net, then covered his face with his left hand.

His second match point came and went with a lob that landed long.

But Thiem did not fold there, getting a third opportunity to close it with a cross-court backhand that glanced off the tape — one of a handful of favorable net cords for him.

When Nadal missed one last forehand, Thiem looked to the sky and spread his arms wide.