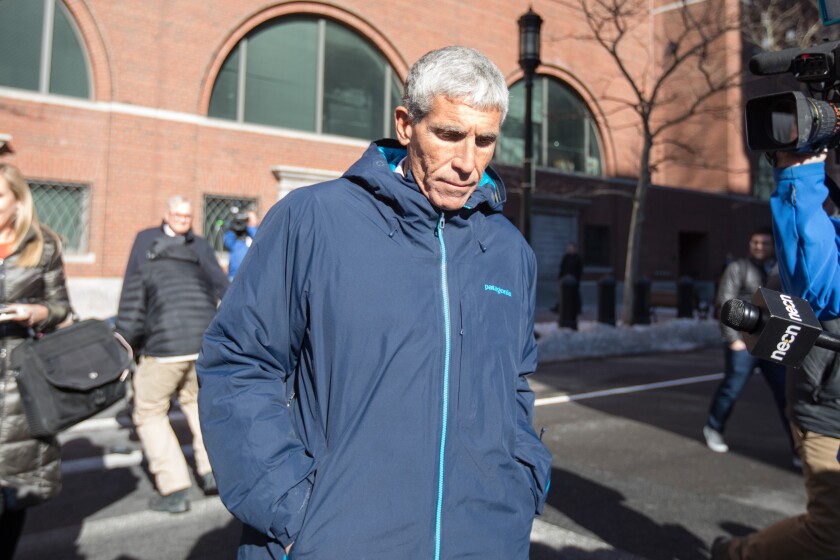 Late on a September afternoon in 2018, William “Rick” Singer pitched a potential client while driving from Newport Beach to San Diego.

“I’ll go to one of the coaches who has a guaranteed spot in a sport and ask them if they’ll give me that spot,” Singer said during the phone call. “And in turn we will help their program and, um, the kid gets in.”

A court-authorized wiretap by the FBI recorded each word.

The transcript of the conversation between Singer and potential client, whose name is redacted, was among almost 500 pages of wiretap transcripts, emails, text messages and other documents that prosecutors filed Tuesday in U.S. District Court in Boston. Singer, who ran a college counseling service, pleaded guilty last year to counts that include conspiracy to commit racketeering and money laundering. He is cooperating with authorities.

The transcript of the phone call provides a deeper look at how the admitted mastermind of the college admissions scandal used contacts at USC and UCLA to get children of wealthy parents into school as athletes in sports they didn’t play — and how he tried to persuade other parents to give him their business.

“So at USC, there’s no men’s soccer. We can’t use men’s soccer, so I have to go to a different coach and get him to use a spot,” Singer said. “So what I normally have to do is I have to create a profile of that kid in a particular sport. And then the athletic liaison takes that person to admissions … and then they walk the kid right through with whatever sport it is.

“Families fund my [charity] and then the universities tell me how I want their checks and what they want done with it. So, for example, if it’s at USC, the first $50,000 will go directly to USC women’s athletics. And then the next couple hundred thousand dollars will come to my foundation …”

Donna Heinel, who worked as the school’s third-ranking athletic department administrator, and legendary water polo coach Jovan Vavic were charged last year in the admissions scandal and fired by USC. Both have pleaded not guilty. Two former USC soccer coaches, Ali Khosroshahin and Laura Janke, were also charged but pleaded guilty as part of deals to cooperate with authorities.

No publicly filed documents in the case have shown that Singer financed team travel.

USC said in a statement that the school “has neither found nor is aware of any evidence that any other coach or staff member associated with the water polo team had any dealings with Mr. Singer.”

Singer turned the conversation to UCLA. Jorge Salcedo, the longtime men’s soccer coach at the school, was charged with accepting $200,000 in bribes to help get two players admitted as soccer players though they didn’t play the sport. He has pleaded not guilty.

“Other people will say, like at UCLA, they’re having a struggle with salaries because people don’t make enough money on the assistant side and they have to live in L.A., which is expensive,” Singer said, “so they’ll come to me and say, ‘Hey, I’ve got three assistants that need the money.’ … [I’ll] make them employees at one of our companies, and then we’ll pay them. They’ll get paid by the university and they’ll get paid outside, because the coach has to raise additional money to pay their salaries.”

Singer didn’t name Salcedo during the call or further detail the purported arrangement with assistant coaches at the school. Salcedo is the only UCLA employee charged. Prosecutors haven’t alleged that Singer or his companies employed assistant coaches at UCLA while they worked there or otherwise distributed money to them.

A UCLA spokesman said the school’s internal investigation hadn’t uncovered any instances of assistant coaches working for both Singer and the school.

In the transcript of a different wiretapped conversations in the court filing, Singer went into more detail about the alleged arrangement with Vavic. An excerpt of the call between Singer and Napa Valley winemaker Agustin Huneeus Jr. on Oct. 2, 2018, after Singer had started cooperating with authorities, was included in the charging papers.

“So what Jovan usually goes is — I subsidize his staff’s salaries,” Singer said, according to the transcript.

“‘Cause it’s too expensive to stay down there,” Singer said. “So I put two of his staff members on my books as contractors.”

“And then I pay them throughout the year … more, uh, additional salary than they normally get. And there’ll be a certain percentage, where he’ll send me an invoice ‘cause he’ll take his team to Hungary or Serbia to play. And he’ll send me another $100,000 invoice. And I’ll pay that.”

Singer added: “All the coaches there know that now. So they just call me instead. Because they don’t want [donations] to go to the general fund.”

Vavic was the only current USC coach, head or assistant, charged in the scandal.

Huneeus was arrested and pleaded guilty to agreeing to pay $250,000 to have his daughter admitted to USC as a water polo recruit.

“This is all about winnin’ the game for your family,” Singer said as the conversation concluded.