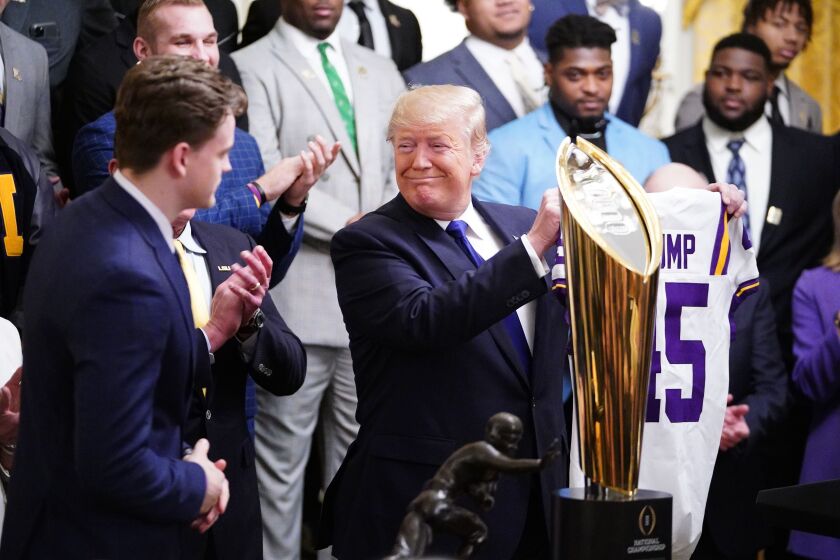 Standing in front of members of the Louisiana State football team, President Trump started his comments by saying his days are 10 times more exciting than those of most other presidents and finished by making an impeachment joke.

But in between, Trump heaped plenty of praise on college football’s newly crowned national champions during their White House visit Friday morning.

“Today, it’s about the coach and the team and that unbelievable quarterback, unbelievable players,” the president said.

Trump seemed to have hit it off with head coach Ed Orgeron and often looked back to personally address the former USC assistant and interim coach while speaking.

“Your head coach, I watched him on television, I said, ‘Man! That guy, he’s all man. He’s a big strong looking guy. I didn’t know if he had laryngitis or was that his real voice?” Trump said. “Ed, it worked, it really worked. You did a job that few people will ever do again. The team is said to be one of the greatest teams, maybe the greatest team in the history of college football. And that’s pretty amazing.”

Also during his speech, Trump commented on how rich several of the players were going to become, raved about the national championship game’s “tremendous ratings on television” and brought up his recent trade deals and the success of the stock market during his administration.

He concluded by inviting the team to join him in the Oval Office.

“We’ll take pictures behind the Resolute desk,” Trump said. “It’s been there a long time, a lot presidents, some good, some not so good. But you’ve got a good one now, even though they’re trying to impeach the son of a bitch, can you believe that?”