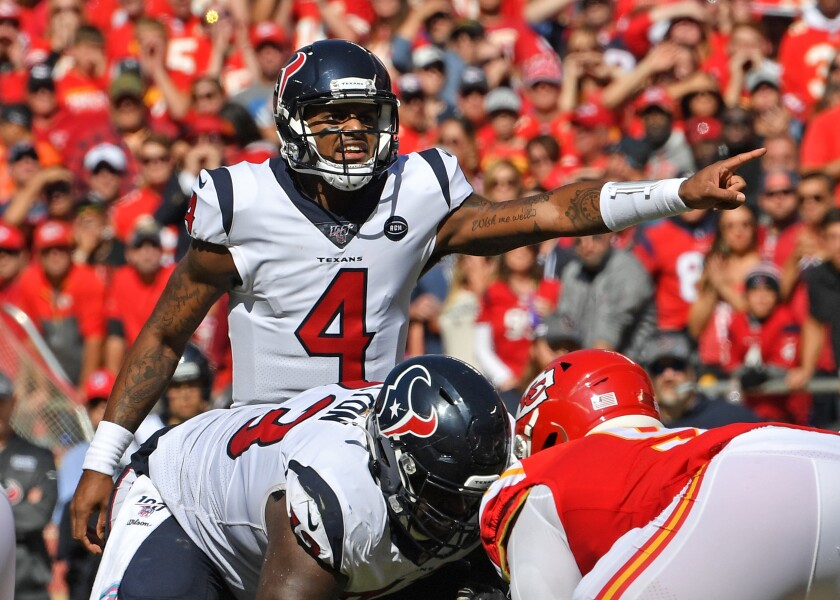 Welcome to Tuley’s Takes, a weekly attempt at revealing the best bets on an NFL Sunday.

I have a reputation as a “dog-or-pass” bettor, which means I don’t bet favorites. The public is usually on the faves because, well, they’re the better teams, right? But the public usually loses in the long run, and we’d rather be on the team the house (aka bookmakers) needs. Besides, faves just want to win the game and don’t care if the margin is enough to cover your bet. We have the dogs trying to win or get close, so we can also cash when they get close enough (within the spread).

This doesn’t always work as well as it has this NFL season, but underdogs are 54-35-2 (60.7%) against the spread. That percentage is typically about 50% at the end of any sports season, so hitting 55% to 60% of that subset turns a nice profit.

Let’s go with these five dogs in Week 7:

The Texans came through last week in their upset of the Chiefs, and they’re still dogs here, albeit by just one point. The Colts are favored because of home-field advantage — though home faves are a woeful 20-41-1 against the spread (ATS) for 32.8%. Plus, they did beat the Chiefs the last time they played. Oddsmakers and the public also like teams coming off a bye week, but while both these teams’ defenses stood up to the Chiefs. The edge goes to DeShaun Watson and the Houston offense. Go Texans +1.

The Dolphins finally covered a spread in their 17-16 loss to the Redskins last week, so at least we saw some effort from this hapless team that everyone is accusing of tanking. I’m backing Miami this week mostly because the Bills shouldn’t be favored by 17 over any team. The Bills are 4-1 ATS, but those lines weren’t -17. The Dolphins are allowing 36 points per game, but the Bills are averaging just 18. They might score more against Miami, but I’m betting the Dolphins can stay within three scores. Go Dolphins +17.

Surprised that the Bears are favored by a field goal considering their embarrassing loss to the Raiders in London, plus the Saints are 4-0 straight up (SU) and ATS in starts by Teddy Bridgewater. The Bears might be getting quarterback Mitchell Trubisky back, but the jury is still out on whether that’s an upgrade. The Saints won their last two road games, at Seattle and Jacksonville. Go Saints +3.5.

Despite last week’s loss to the Vikings, I still consider the Eagles to be one of the best teams in the NFC, and am willing to go with them against a Cowboys team that has been exposed in recent weeks. This is where Philadelphia takes control of the NFC East. Go Eagles +3.

We finally get a home dog on Monday night. The Jets looked like a new team with Sam Darnold returning from his bout with mono. And don’t forget the Jets covered with Luke Falk in Week 3 at New England. It took a pick-six against Patriots backup Jarrett Stidham to do it, but now the Jets get the Patriots at home in what amounts to their Super Bowl. Go Jets +9.5.

Get more Tuley’s Takes in VSiN’s free daily newsletter. Sign up at VSiN.com/newsletter.