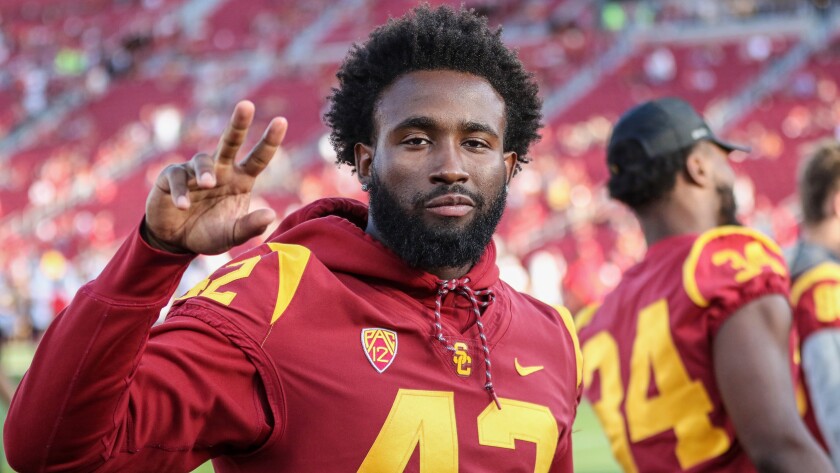 Two sons, two injuries and one nightmarish night for a USC football mom

As the injuries piled up, Shan McClain kept praying.

Since Munir, a freshman, and Malik, a redshirt freshman, had started playing football at USC, she spent every game trying her best to stay positive, praying and hoping above all else that both would come back to her unscathed.

“They’re in the battlefield,” Shan says. “I’m not OK until the seconds are gone off the clock.”

Until then, there was little that Shan, a single mother, could do from her seat in Row 13, Section 18 at the Coliseum but pray and hope and pray some more. And on this particularly unprecedented Saturday, when both of her sons suffered serious injuries on the same field in the same night, she’d be doing more of each than usual.

Soon after the third quarter began, she watched in elation as Malik sped past Arizona’s offensive line and sacked quarterback Khalil Tate. It was an important moment for the older of her two Trojans, who’d patiently waited for his opportunity at outside linebacker.

But as the stadium celebrated the sack, Shan watched as trainers surrounded Malik.

It was a common image on a Saturday night riddled with injuries. Shan told herself not to overreact.

But as Malik headed with trainers to the locker room, she decided she’d waited long enough. She wanted to see her son’s expression as he left. She needed that peace of mind.

After he disappeared into the tunnel, Shan reached out to Cheryl Taplin, USC football’s assistant director of operations, who serves as the point person for parents when their sons are injured on the field.

Malik had suffered a dislocated shoulder, Taplin told her. Trainers were working in the locker room to set his arm back into place.

Malik returned soon after, wearing a sling. He stood next to Munir on the sideline, and the brothers talked. Watching her sons together, Shan breathed a sigh of relief.

Then, with three minutes remaining in a blowout victory, Munir caught a nine-yard pass along the sideline, went down, and didn’t get up.

Shan watched as he grabbed at his right knee, and her heart sank. She tried not to think of the worst. God, just please let him get up, she thought to herself, as teammates and staff surrounded her son. That would be enough for now.

When Munir finally stood, she exhaled. But it was only a brief reprieve. As USC put the finishing touches on a 41-14 victory, Taplin connected her with a doctor, who explained her sons’ injuries.

Even days later, no one could quite believe that two brothers had been injured on the same team in the same game.

The dislocated shoulder would keep Malik out two to three weeks, she was told, giving him a chance to return this season. But Munir’s injury was different. You should be with them, the doctor said.

“I tried not to be frantic,” Shan recalled. “I believe in energy. I don’t want [Munir] thinking that his mom thinks something is going to happen.”

Deep down, she knew Munir had torn the anterior cruciate ligament in his knee, his second time in three seasons suffering the same serious injury. As she reunited with her sons, their faces streaked with tears, Shan told herself to be strong. She told the boys to be strong for each other.

The prognosis was as serious as they’d expected. Munir’s ACL was torn; though, the injury was in the opposite leg. Still, his freshman season was over after just five games and three catches.

A couple weeks earlier, Shan had spoken with USC coach Clay Helton on the phone about Munir’s role. A stellar fall camp performance suggested Munir would contribute as a freshman.

But he hadn’t, and she wanted answers. So she texted both Helton and receivers coach Keary Colbert.

Helton called her back. She asked what the plan was for Munir this season. Would he redshirt?

No, Helton told her, Munir would be needed down the stretch this season.

The next week, in South Bend, Ind., he was held without a catch against Notre Dame. Then, last Saturday, his only catch proved to be his last as a freshman. With five games played — one beyond the NCAA’s new rule — Munir presumably won’t be eligible for a redshirt this season.

It’s an especially cruel twist of fate for Munir, who suffered his first ACL tear in the middle of a crucial stretch for his college recruiting. Mentally, his mother says, he’s handling the injury well.

“He’s wise beyond his years,” she explains.

Helton visited with his young wideout on Monday and said he was “really taking it like a pro.”

“He did a tremendous job for us this season. Got some valuable reps as a freshman.”

In a few weeks, Malik will return to the field with time still left to make a mark. For Munir, the process will take months longer.

“This is a test,” Shan told The Times on Monday, “and it’s only going to make everybody stronger and make them stronger. Adversity, you have to be strong through it.”

Saturday night had tested her own strength as a mother. She wouldn’t soon forget the feeling of seeing her sons crumpled on the turf, surrounded by trainers and teammates. But now, it was time to look forward. For her boys.

It was a mother’s job to keep them positive. It was her responsibility to stay strong.

And soon, she will be back watching both of them from the bleachers, praying for their safety, knowing now, after a nightmarish Saturday night, just how fragile it can be.