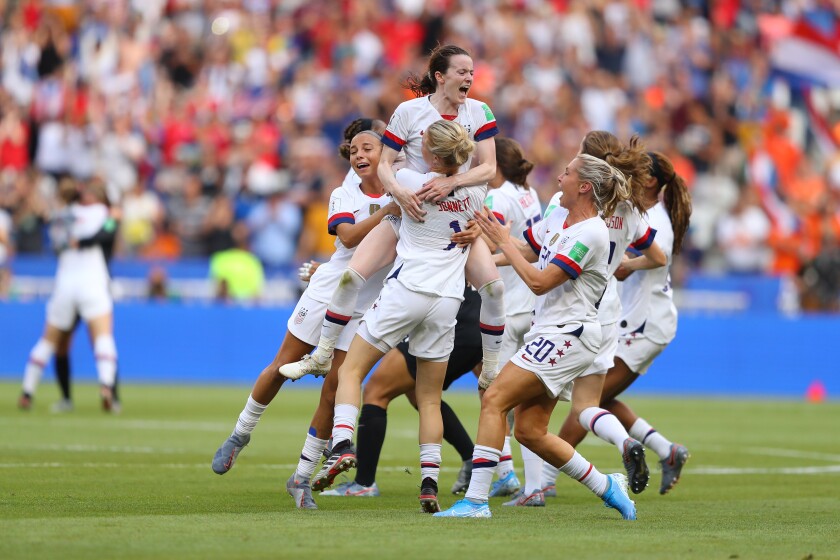 Twenty-two of the 23 players who played on last summer’s Women World Cup champion U.S. team have been called up for the first training camp of 2020 in preparation for next month’s Olympic qualifying tournament. The only World Cup veteran left off the roster is forward and co-captain Alex Morgan, who is pregnant.

Morgan, who is expected to give birth to her first child in April, has said she hopes to be back to play in Tokyo this summer. The U.S. is seeking to become the first team, male or female, to win a World Cup and an Olympic title in consecutive calendar years.

In addition to World Cup stars Megan Rapinoe, Carli Lloyd, Rose Lavelle, Alyssa Naeher and two-time U.S. player of the year Julie Ertz, the 28 players summoned to Tampa, Fla., by new coach Vlatko Andonovski include forward Sophia Smith of Stanford. Smith, 19, is the only nonprofessional and only player without a U.S. national team appearance on the roster.

Lloyd’s inclusion is also significant because the two-time FIFA world player of the year, who has seen her playing time cut dramatically in recent years, had said she was considering retirement after the World Cup. But Morgan’s absence opens a spot for Lloyd, who will celebrate her 38th birthday before July’s Olympic tournament begins.

“The players are coming off their break so I know everyone will be excited, rested and refreshed,” Andonovski said in a statement. “A long-time strength of this team has been the internal competition on the training field, and our coaching staff is looking forward to seeing that during camp.”

Andonovski was chosen in October to replace Jill Ellis, a two-time World Cup champion who stepped down last fall as the winningest coach in national team history. He will coach his first competitive game with the national team on Jan. 28, when the U.S. opens Olympic qualifying against Haiti in Houston. The Americans will also face Panama and Costa Rica in group play. The tournament semifinals and final will be played at Dignity Health Sports Park in Carson on Feb. 7-9.

The team will train from Jan. 5-15 in Florida, after which Andonovski will trim the roster to the 20-player limit for the qualifying tournament.