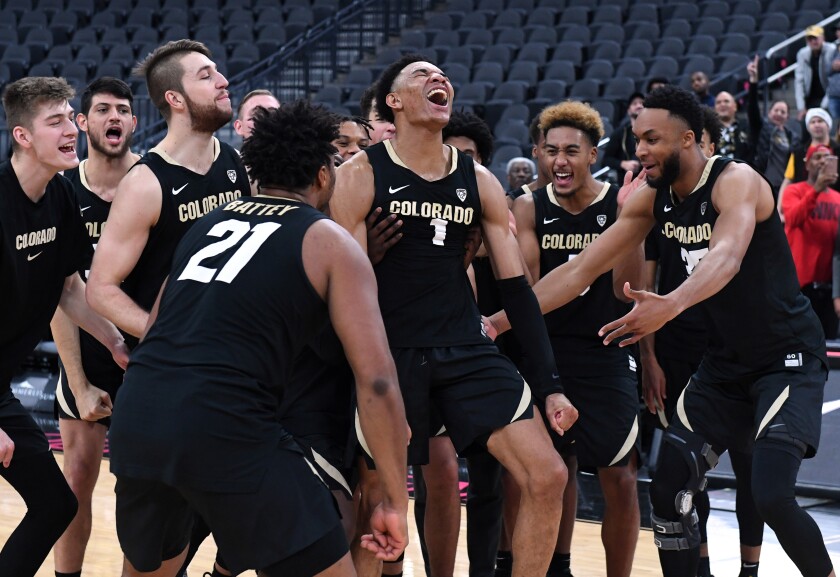 UCLA coach Mick Cronin’s best advice to his young, struggling team might be to stick around and see what happens.

It’s a formula that has worked for Colorado, which has gone from barely over .500 two seasons ago to competing for the Pac-12 Conference title thanks to a roster rife with veteran players who waited out the troubled times in search of better days.

The Buffaloes could be on the verge of leaving a legacy on the strength of a starting lineup that features one senior and three juniors, a rarity among major-conference teams during the one-and-done era of college basketball.

Colorado’s approach could be called four-and-lore given the potential of a team that has already been ranked for a school-record nine weeks and is tied with USC for second in the Pac-12 standings, half a game behind Oregon. Colorado returned all five starters and 94.9% of its scoring from last season, meaning the Buffaloes know where their production is coming from.

“A team like Colorado is rare to see for sure,” said UCLA junior guard Chris Smith, the Bruins’ only upperclassman in the starting lineup. “Not a lot of guys stay that long in college.”

UCLA’s most recent starting lineup has also included sophomores Jalen Hill and David Singleton in addition to freshmen Tyger Campbell and Jaime Jaquez Jr. Its top players off the bench in recent weeks have been freshman Jake Kyman and sophomores Jules Bernard and Cody Riley.

Consistent production has been an issue. Seven different players have led the team in scoring and 11 players, including the freshmen, have established career highs for points scored.

Cronin noted how Colorado junior point guard McKinley Wright IV was able to play nearly an entire game without a dropoff in production, averaging 34.1 minutes per game. That’s been an ongoing problem for Campbell, his Bruins counterpart who has been up and down in his 27.5 minutes per game.

“He’s a freshman, so sometimes he’s effective and other times he’s tired,” Cronin said. “There’s times where fatigue gets him.”

Complicating his efforts to keep his team together, Cronin has already experienced some roster churn midway through his first season with the Bruins. Redshirt freshman forward Shareef O’Neal recently announced he was transferring after having barely played during his first college season.

UCLA could experience more departures with Smith and Hill potential candidates to leave early for the NBA draft. And the Bruins’ incoming players could be gone in a flash; Cronin’s first two recruits, Daishen Nix and Will McClendon, are elite prospects unlikely to stay for more than a couple of college seasons at most.

But perseverance can have a handsome payoff.

Cronin relayed how Kenyon Martin went from needing extra workouts in a back gym as a freshman at Cincinnati because he could barely contribute in practice to becoming the consensus national player of the year and the NBA’s No. 1 draft pick as a senior.

“It’s just hard, this day and age,” Cronin said of college players’ willingness to endure early struggles. “Back then, Kenyon Martin didn’t have social media, he probably didn’t even have a [cell] phone and didn’t have to feel the weight of the world on how he’s underachieving. So it’s what’s made coaching so different. You’ve got to make sure when you’ve got young guys, it’s like, look, we’re not going to be young forever, so Colorado’s a great example.”

Update: Colorado has defeated UCLA in four consecutive meetings going back to the 2016-17 season. The Buffaloes have won four of their last five games overall thanks in large part to a defense that is holding opponents to 61.7 points per game, ranking No. 24 nationally. UCLA freshman point guard Tyger Campbell has been cleared to play after being limited to five minutes against Oregon on Sunday because of a bruised left hip.