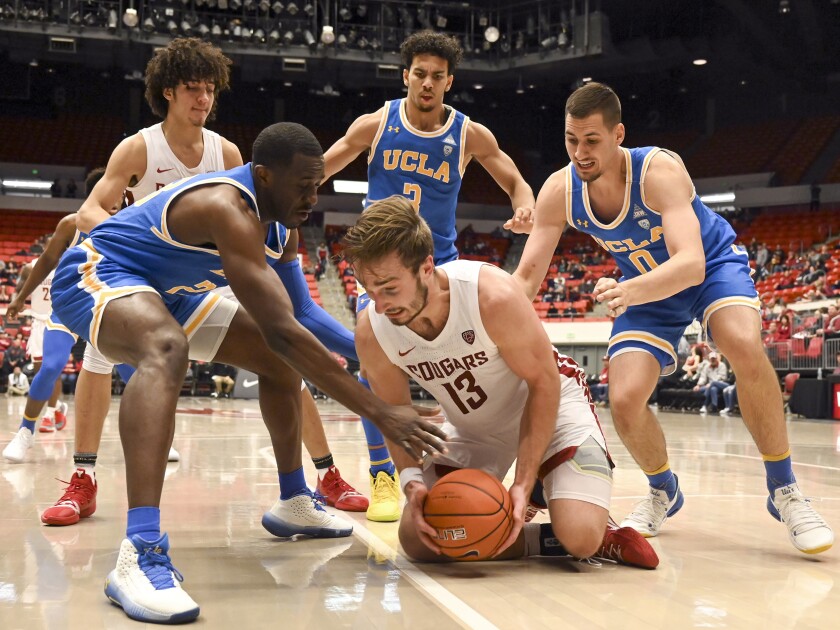 UCLA endured something of a travel nightmare Saturday afternoon against Washington State.

The Bruins couldn’t get the defensive stop they needed in the final minute of regulation and then gave up the first six points of overtime during an eventual 79-71 loss to the Cougars at Beasley Coliseum.

Trailing by three points in the final minute, Washington State forced overtime after Isaac Bonton drove toward the basket and fired a pass to C.J. Elleby for a three-pointer that tied the score. UCLA called timeout with 14 seconds left to set up its final play, but Chris Smith lost the ball while dribbling on the perimeter and the Bruins (8-7 overall, 1-1 Pac-12 Conference) could not get off a shot.

It was all Cougars early in overtime as Jeff Pollard made a jump hook, Elleby stole a pass from Smith and went in for a layup, and Bonton drained a turnaround jumper to build a 71-65 advantage.

The Bruins eventually made it 73-71 on Jake Kyman’s three-pointer, but Bonton made a tough jumper over Jules Bernard, and Noah Williams made three free throws to extend the cushion.

Smith finished with 22 points on eight-for-14 shooting and Prince Ali added 11 but the Bruins went cold in overtime, making only two of eight shots. Bonton scored 17 points and Elleby had 15 for the Cougars (10-5, 1-1), who made five of eight shots in the overtime.

UCLA looked like it was going to post its first road sweep of the Washington schools in three seasons when Ali drove for a finger-roll layup to give the Bruins a 50-39 lead with 13:05 left.

But the Bruins’ offense went into a funk against Washington State’s zone defense and the Cougars started scoring with ease and took a 54-53 lead on Bonton’s driving layup. Washington State extended its lead to four points before the Bruins rallied behind Kyman’s deep three-pointer and two free throws from Alex Olesinski that gave UCLA a 51-59 lead after the senior forward grabbed a rebound on a missed free throw and was fouled going back up toward the basket.

UCLA held a 33-24 halftime lead after holding Washington State to 20.8% shooting in the first half. The Bruins’ lead would have been significantly larger had they not kept a turnover-a-minute pace in the game’s early going, with their first three possessions ending on a Cody Riley traveling violation, Riley getting tied up for a jump ball that went to the Cougars and a Jaime Jaquez Jr. backcourt violation.

Washington State built an early 9-2 advantage before UCLA scored the next 10 points. Olesinski committed perhaps the most regrettable play of the first half when he fouled Aljaz Kunc on a three-pointer, allowing Kunc to complete the four-point play when he made the free throw to give the Cougars a 19-18 lead.

But UCLA closed the half on a 15-5 push sparked by five points from Smith, who continued to dominate against smaller counterparts while playing power forward as part of the Bruins’ small lineup. Olesinski contributed to the push by banking in a three-pointer and Jaquez converted a three-point play after going in for a layup on a Euro step move while being fouled.

More importantly, the Bruins stopped turning the ball over, with only one of their 10 first-half turnovers coming after the midpoint of the first half.

UCLA coach Mick Cronin included Smith as part of the four-guard starting lineup he unveiled for a second consecutive game to help with spacing and ball movement.