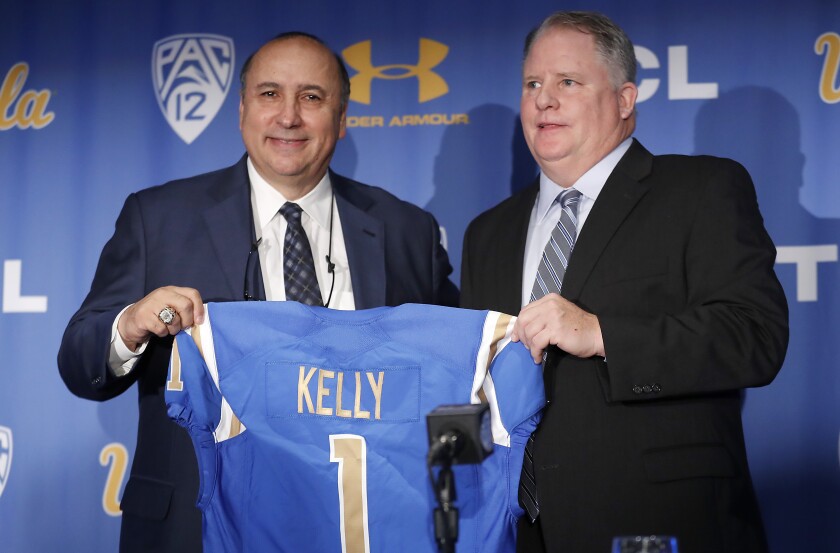 Even as UCLA’s football team extended an epic Rose Bowl drought, its men’s basketball team surrendered blueblood status, and its Olympic sports fell behind Stanford in piling up NCAA titles, the Bruins almost always could count on one thing worthy of a fist pump under athletic director Dan Guerrero.

They would balance the budget.

Now that bit of being-in-the-black magic has dissipated amid a confluence of factors including coaching turnover in the school’s two biggest sports, leaving UCLA’s athletic department with a $18.9-million deficit for the 2019 fiscal year, according to university records. It’s the Bruins’ first budget shortfall since it was $164,000 in the red in 2004.

The debt will be covered by an interest-bearing loan from the university, a school spokesperson said, though it may not be the last time a bailout is required.

UCLA’s athletic department appears headed for another loss in the millions this year as a result of lagging ticket sales in its marquee sports, putting Guerrero’s successor in a precarious spot when he or she takes over upon his retirement this summer. The new athletic director also will be confronted by tens of millions in overall debt service on the recently completed Wasserman Football Center and Mo Ostin Center that resides outside the athletic department’s operating budget.

The bleak financial outlook has left some wondering whether the Bruins have invested wisely from an athletic department budget that has grown 209% under Guerrero, mushrooming from $42 million upon his arrival in 2002 to $130 million.

“Every dollar spent, you could say, should be justified by some type of return, either dollar return or some other performance metric that could be used to assess whether or not it’s worth it,” said Jon Baumunk, a lecturer in accounting at San Diego State. “Absent that justification, then I think those additional expenditures could legitimately be called into question.”

Guerrero declined to be interviewed for this story beyond providing a statement, but he told The Times last month he believed his department’s infusion of cash into its flagship programs would return a handsome dividend.

“We’ve made significant investments in these programs, we’re putting more resources into football and men’s basketball now than ever before,” Guerrero said at the time, “and of course we’re doing this because we want them to have every opportunity to be successful.”

A large chunk of that investment went toward paying coaches to go away.

According to records first obtained by the San Jose Mercury News, the 2019 deficit resulted from a slew of pricey coaching buyouts and hires. The dismissals of Jim Mora and Steve Alford cost a combined $16.4 million in buyouts while replacements Chip Kelly and Mick Cronin commanded school-record salaries, including Cronin’s $2-million hiring bonus.

While athletic department donors pledged to cover an unspecified portion of the buyouts over five years, UCLA had to immediately foot the bills. Mora’s $12.5-million severance was listed on the 2018 budget, which avoided running a $7-million deficit thanks to an Under Armour bonus of $16 million and the ability to draw from departmental reserves.

The 2019 deficit came despite an influx of revenue from the record Under Armour apparel and IMG/Learfield marketing deals that was unable to offset other expenses. It didn’t help that the Pac-12 Network has failed to meet even conservative estimates for revenue sharing, paying UCLA only $2.9 million in the last fiscal year.

“While it is unusual for us, we expect this shortfall can be mitigated,” Guerrero said in a statement. “The investments made into our football and men’s basketball programs will pay off, ticket sales will normalize and one-time expenses will be paid. We have been actively working with campus to find long-term solutions, and to address the financial challenges impacting college athletic programs across the country.”

UCLA is not considering the elimination of any sports or staffing reductions as a result of its shortfall, according to a spokesperson, though the athletic department is contemplating other ways to cut costs.

The department’s 2019 shortfall came after an $8.1-million increase in operating expenses for the football team over a two-year period and an additional $5 million allocated for Olympic sports over the same span for improved coaching salaries, travel and equipment. The new practice facilities for the football and basketball teams also have come with an extra $2 million in yearly maintenance costs.

Included in the rise in football expenses was a dramatic uptick in meal costs.

UCLA spent $5.4 million for its meals under Kelly during the 2019 fiscal year, up from $997,000 just two years earlier. The increase started before the 2017 season when the team moved into the Wasserman Football Center, which requires catering because the facility does not contain its own kitchen.

Kelly also has been fanatical about the quality of the food served to his roughly 120 players, who are fed up to three meals a day. Sourcing and nutrition are closely monitored, with organic options and grass-fed beef as part of the smorgasbord of selections.

“I don’t know if another team in the country gets to have the nutrition that we get, so it’s really amazing what coach Kelly has been able to do with that whole nutrition part,” quarterback Austin Burton said in August. “They give such different options that you’re going to like something they offer, so it’s really awesome.”

The buzz over Kelly’s hiring was expected to boost ticket sales, but the team’s 7-17 record since his arrival led to record lows in both season tickets (25,136) and average attendance (43,849) at the Rose Bowl in 2019. Tickets generated just $9 million in revenue, down from the $13.5-million average over the previous 10 years and less than half of the $20 million the team raked in when the Bruins were setting attendance records under Mora in 2014.

Basketball attendance also has dipped from an average of 11,183 during the 2016-17 season, when the Bruins made their last appearance in an NCAA tournament regional semifinal, to 8,269 in 2018-19, when the team missed the tournament. That dropoff led to a decrease in ticket sales from $7 million during the 2017 fiscal year to $5.7 million during 2019, and another decline is expected in 2020 with the Bruins averaging only 6,128 fans for home games this season.

UCLA suffered a corresponding $1.13-million drop in donations tied to season tickets for football and men’s basketball from the 2018 to 2019 fiscal years. Non-program-specific contributions dropped another $3 million last year as part of a tax law that went into effect and removed a benefit tied to season tickets, prompting many donors to push up their donations to earlier years.

The search for new revenue streams may be a quest fraught with mostly dead ends.

Unlike other Pac-12 schools, only a tiny fraction of UCLA’s athletic department budget comes from campus sources. The Bruins receive just $60,000 a year from the school to go with roughly $2.5 million in student fees, less than half of the $5.2-million average in institutional support brought in by the Pac-12’s other public schools.

UCLA also lags behind its conference counterparts when it comes to the ability to generate revenue from its home stadiums. Playing at the Rose Bowl, where UCLA’s lease runs through June 2044, deprives the school of an estimated $12 million to $15 million per season in opportunity costs because the Bruins receive no share of suite sales or stadium sponsorship sales and only a tiny sliver of parking, concessions and merchandise revenues.

The Bruins’ arrangement in their on-campus arena isn’t any more lucrative. UCLA must pay a venue management fee every time it plays in Pauley Pavilion and receives less than one-third of net concessions and merchandise sales. The athletic department also pays for parking staff at its events there but does not recoup any of the revenue generated.

So where does that leave Guerrero and his successor in their pursuit of extra dollars? The Pac-12’s media rights deal isn’t up until 2024, providing no additional cash for at least a few more years. UCLA’s apparel and marketing deals are locked in for the foreseeable future.

It appears largely up to Kelly and Cronin to generate the success that could reinvigorate fans, bringing them back to the Rose Bowl and Pauley Pavilion.

“Now that the table has been set, now that the changes have been made, the proof will be in whether the performance actually does occur that was hoped for,” Baumunk said. “In other words, these changes would have to work because they’ve been painful ones to make from a budgetary perspective.”

They’ve also been excruciating from a fan perspective. The football team has lost more than twice as many games as it has won under Kelly and the basketball team is just starting to pull out of a two-year nosedive that began under Alford. Cronin may have unwittingly provided the solution for UCLA’s fiscal woes, not to mention its long-suffering fans, on the day he was introduced in April.