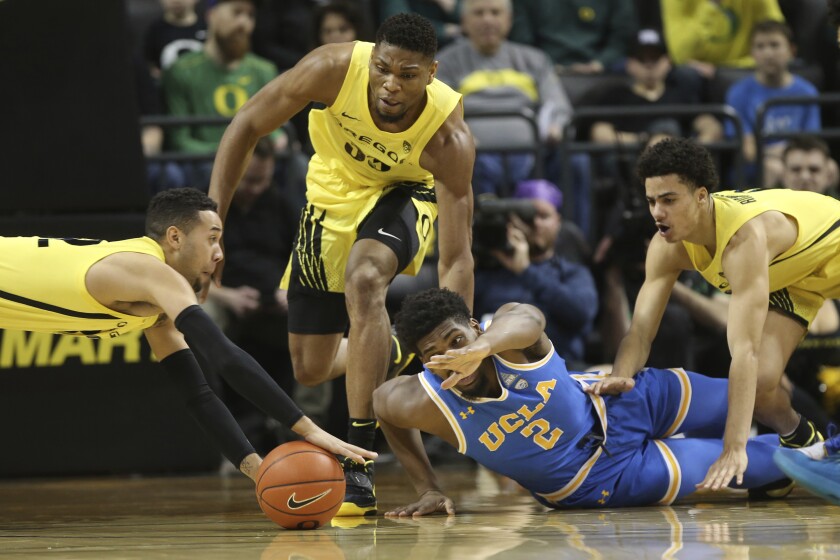 UCLA’s mistakes pile up in loss to No. 12 Oregon

It was as if UCLA was compiling a how-not-to manual, tentatively titled: “All the wrong ways to counteract a full-court press.”

Jaime Jaquez Jr. stepped through a double team and threw the ball out of bounds. Chris Smith had a lazy pass stolen and compounded his mistake by committing a foul on the resulting layup. Jaquez threw what should have been a simple inbounds pass in the backcourt that skipped past David Singleton out of bounds.

A little over 14 minutes into the first half against Oregon on Sunday afternoon, UCLA had 14 points to go with its 14 turnovers.

Somehow, that didn’t qualify as the Bruins’ biggest blunder.

UCLA put six players on the court coming out of a timeout, leading to a technical foul and audible amusement among the crowd.

“That’s one way to try to break the press,” one fan near the media seating quipped.

The Bruins gave themselves no chance with their menagerie of mistakes during a 96-75 loss to the No. 12 Ducks at Matthew Knight Arena that served as marathon’s worth of backward steps from their recent uptick in play.

The Bruins surrendered a season high for points and finished the game with 23 turnovers, in part because they were missing their primary ballhandler for most of the game. Freshman point guard Tyger Campbell suffered a left hip injury in the first half and had to be helped to the locker room. He did not return.

UCLA yielded 48 points by halftime after having given up an average of 49 points per game during a two-game winning streak that Oregon ended in inglorious fashion. Of course, it was hard to place too much blame on UCLA’s defense after the Ducks scored 20 of their first-half points off UCLA’s 14 turnovers while building a 48-26 advantage.

Generating points was a protracted struggle for UCLA given its inability to get the ball past halfcourt on a flurry of first-half possessions. The Bruins also committed a handful of turnovers in the frontcourt, including Smith traveling on a spin move and forward Cody Riley losing the ball while trying to make his own move toward the basket.

Guard Jake Kyman finished with 20 points and forward Jalen Hill added 16 to lead the Bruins (10-10 overall, 3-4 Pac-12 Conference), who were blown out despite shooting 50%, including 60% in the second half.

One of UCLA’s final mistakes came when Singleton turned the ball over on an inbounds pass, leading coach Mick Cronin to replace him with walk-on Russell Stong.

Oregon paid homage to Kobe Bryant before the game with a scoreboard tribute to the Lakers legend who died in a helicopter crash alongside his daughter Gianna and several other passengers earlier in the day. One Ducks fan seated in the student section wore a Bryant jersey.

“Let’s get that Mamba mentality up,” the stadium DJ told the crowd before the game, “and let’s go.”