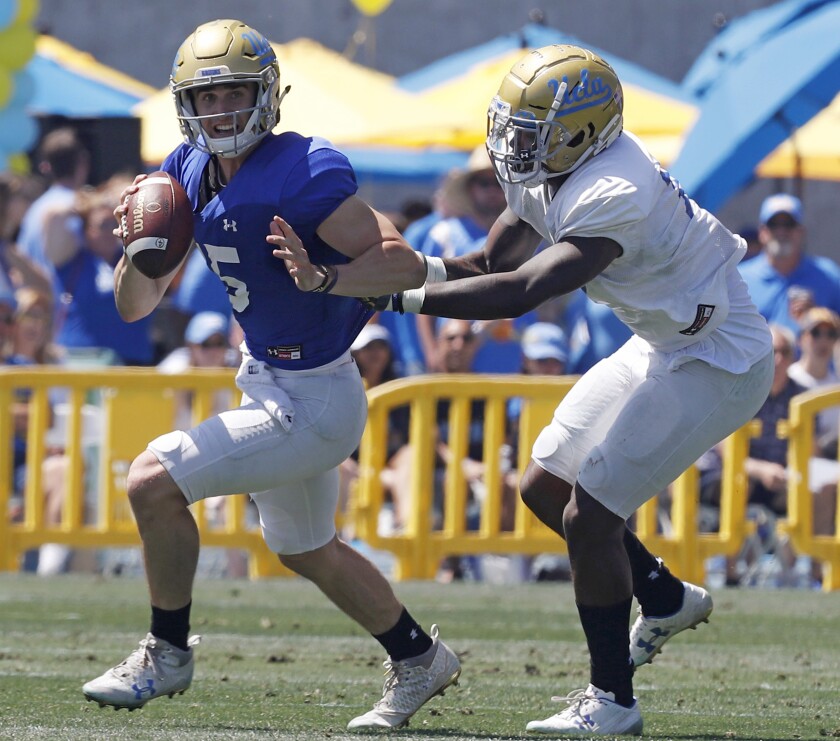 UCLA, USC student newspapers find something to agree on

Compliments could be lobbed among heated rivals when student journalists from UCLA and USC line up across from one another for the Blood Bowl, the annual two-hand touch football game involving the staffs from both school newspapers.

“Hey, I really liked your story!”

“That center spread was amazing!”

For the first time, the staffs are collaborating on an all-football preview issue ahead of the rivalry game between the Bruins and Trojans on Saturday afternoon at the Coliseum.

It will be distributed on both campuses Friday as part of a package that will also include interactive online displays and videos. The project has been in the works for roughly two months and was sparked by a similar collaboration between the student papers at the University of North Carolina and Duke before a basketball game last season.

“It’s taken a lot of coordination,” said Jacqueline Dzwonczyk, assistant sports editor at the Daily Bruin, “so we’ve gotten to actually work with them this year, which is cool because in previous years we didn’t know them at all.”

One drawback of publishing Friday is that the special edition won’t include results of the Blood Bowl, scheduled for that evening at Drake Stadium on the UCLA campus. But in another first, a camera crew from the Pac-12 Network is expected to be on hand to record highlights for a segment that will run at a later date.

Dzwonczyk said the added exposure should generate additional turnout among her staff, even if it doesn’t raise the stakes.

“I don’t think it will be that much pressure,” Dzwonczyk said, “because we all know we’re not good, for the most part.”

One pro sports Hall of Famer has participated in the Blood Bowl, though he earned that distinction in baseball. Randy Johnson was a 6-foot-10 student photographer and receiver for the Daily Trojan before he became “The Big Unit” as part of a decorated Major League Baseball career in which he won five Cy Young Awards.

Spander recalled his games in the 1950s getting a few paragraphs of coverage in the Los Angeles papers of that day, including The Times, Examiner, Mirror and Herald.

That was the case again last year, when USC won the Blood Bowl before the Bruins prevailed 34-27 the next day at the Rose Bowl. USC students have won the last two games in the series after the Blood Bowl went on hiatus from 2014-16.

“We’ve got to go out and keep them from three-peating,” said Ryan Smith, the football beat writer for the Daily Bruin.

The UCLA students considered themselves at a disadvantage last season when their USC counterparts showed up in jerseys, cleats and receivers gloves. There were no yard markers at Drake Stadium, so the players did their best to form makeshift sidelines.

“Bags, shoes, anything you could find, like a sweatshirt,” said Sam Connon, the Daily Bruin sports editor.

The field had to be narrowed after touchdowns were scored with ease on each of the team’s first two drives. Then came an operational nightmare: The stadium lights went out.

Luckily, there was enough light remaining from the adjacent intramural fields to finish the game. The USC students celebrated their victory before heading home, having made new crosstown allies.

“It’s friendly,” Dzwonczyk said of the game, “because, to be honest, no one that covers sports is really that good at sports.”

Some of the mischief associated with the crosstown rivalry was detailed this week when the rivalry episode of a YouTube video series about UCLA football players was released.

Former Bruins running back Bolu Olorunfunmi said someone spit on his car driving back from a game at the Coliseum and video creator Kevin Wei, a former UCLA student, triggered a look of disbelief from Olorunfunmi when he told him that USC supporters in 1989 released 30,000 crickets painted red and gold in a UCLA library during exams week.

“You guys are sick,” Olorunfunmi said in the video as USC guard Jacob Daniel, one of Olorunfunmi’s former high school teammates, stood next to him.