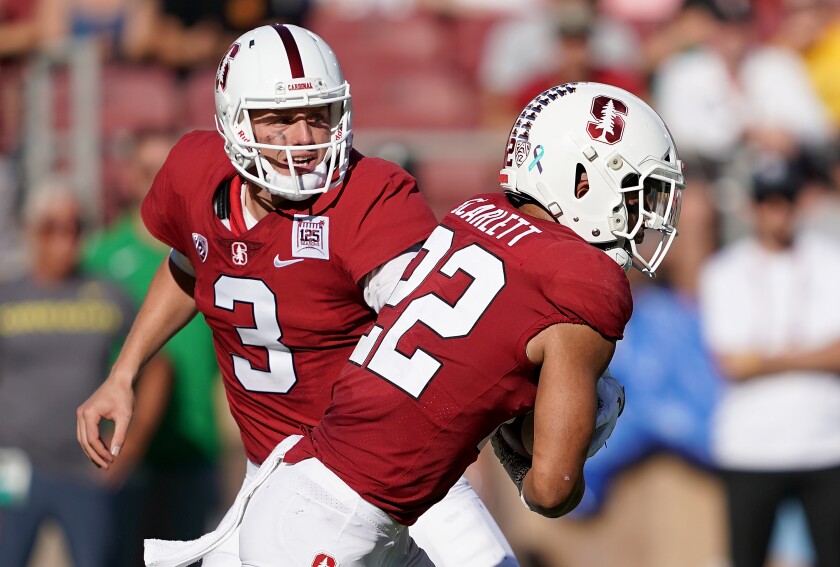 UCLA-Stanford: A look at how the teams match up

Stanford running back Cameron Scarlett versus the UCLA defense. Scarlett is coming off a red-letter day against Washington in which he rushed for a career-high 157 yards and a touchdown. He continued to churn out yardage even in obvious running situations late in the game, gaining two first downs that helped the Cardinal secure the upset victory over the Huskies. UCLA’s run defense has been a relative strength on an abysmal unit, giving up 162.7 yards per game to rank eighth in the Pac-12 Conference.

UCLA (397.3 ypg/26.2 ppg): First things first: Will quarterback Dorian Thompson-Robinson return after an injury layoff or will Austin Burton fill in once again? Either way, the Bruins will need to find increased productivity to end their 11-game losing streak against Stanford. The Bruins have featured a balanced attack in their last two games, passing and rushing for at least 200 yards in each one, but it didn’t result in a victory.

Stanford (353.0 ypg/20.7 ppg): The Cardinal’s offensive line is especially thin after right guard Harry Hattis suffered a season-ending injury against Washington. That left three freshmen to man the line, though they did just fine in continually opening holes for Scarlett. Stanford will be down to third-string quarterback Jack West after coach David Shaw announced that K.J. Costello and backup Davis Mills were out with injuries.

UCLA (503.3 ypg/37.7 ppg): The Bruins have turned every Pac-12 opponent into Quarterback U, giving up a school-record nine touchdowns to Washington State’s Anthony Gordon, a career-high five touchdowns to Oregon State’s Jake Luton (not to mention one on the ground) and an all-too-welcoming 352 yards passing to Arizona freshman Grant Gunnell in his first college start.

Stanford (393.7 ypg/26.5 ppg): The Cardinal are coming off a game in which they held Washington to a season-low 13 points, dominating in all facets. Cornerback Paulson Adebo broke up four passes and cornerback Kyu Blu Kelly made his first career interception, leading to a field goal that provided the game’s final points.

Stanford receiver Connor Wedington averages 28.1 yards per kickoff return, leading the conference, but he may not get many chances against UCLA because kicker J.J. Molson has had 27 of his 30 kickoffs go for touchbacks.

UCLA running back Demetric Felton Jr.’s 75-yard run against Oregon State was his fourth touchdown of at least 75 yards this season, the most by a Bruin in one season.