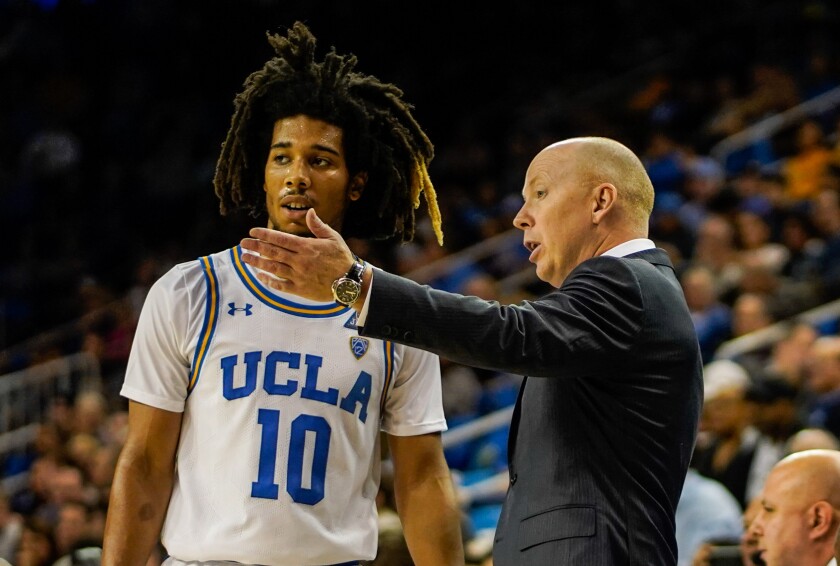 Mick Cronin calls the stat sheet a coach’s enemy because it tests a team’s culture and togetherness when the points and minutes aren’t divvied to every player’s liking.

It can also antagonize when it reveals so many shortcomings.

UCLA’s offensive weaknesses were laid out in small black type for all to see after the Bruins staggered their way to a season-opening 69-65 victory over Long Beach State on Wednesday.

Their sloppiness was disclosed in their 14 turnovers. Freshman point guard Tyger Campbell had four, which was forgivable considering he played a team-high 37 minutes in his college debut. But sophomore guard David Singleton had three turnovers in 13 minutes after committing just 12 turnovers in 559 minutes all of last season.

The Bruins’ lack of ball movement was evident by three starters combining for just one assist. Sophomore guard Jules Bernard finished with no assists and played only 10 minutes after reverting to some of his bad habits from last season, when he drove into defenders and threw up wild, contested shots.

Their lack of perimeter shooters was exposed in their making just five of 19 three-pointers, a less-than-passable 26.3%. Redshirt senior guard Prince Ali made one that gave the Bruins a late five-point cushion, but only after having missed his first four attempts from long range. Five other players combined to miss all six of their three-pointers.

“I think we’ve got a lot of guys nervous when it comes to shooting the ball, but that’s to be expected,” Cronin said afterward, noting that his entire roster is stepping into larger roles with the departures of Kris Wilkes, Jaylen Hands and Moses Brown. “It’s just going to take us time to find a rhythm, offensively, as we get young guys comfortable.”

Cronin prevailed in his UCLA debut in part because his team scored 24 points off turnovers and snagged 14 offensive rebounds, leading to 12 second-chance points.

Long Beach State contributed to UCLA’s offensive woes by continually switching defenses. The Bruins settled into a better offensive rhythm over the final 20 minutes, scoring 42 points in large part because they committed only four turnovers.

“We did a much better job in the second half,” Cronin said, “when guys were in front of [our bench] so I could kind of direct traffic.”

The Bruins will need reliable scorers to emerge soon to have any chance of returning to the NCAA tournament for the first time since the 2017-18 season. Cronin said different players have stepped up in practice and he considers redshirt sophomore forward Cody Riley his best low-post option because of his explosiveness and strength around the basket.

Two mainstays remain limited by injuries, Ali recovering from a sprained ankle suffered in an exhibition game and Singleton still rounding into form from a broken foot sustained during the Pac-12 Conference tournament.

Ali, who was wearing a protective walking boot on the day of the season opener, called himself a work in progress. Just like his team.

Update: If Long Beach State, which returned no one of consequence, gave the Bruins fits, then what might UC Santa Barbara do? The Gauchos (1-0) have brought back their four best players from the team that won 22 games last season and routed Jackson State 83-62 on Wednesday night. Sophomore forward Amadou Sow made all seven of his shots on the way to 20 points for the Gauchos, who shot 59.6% to help coach Joe Pasternack log his 100th career coaching victory.