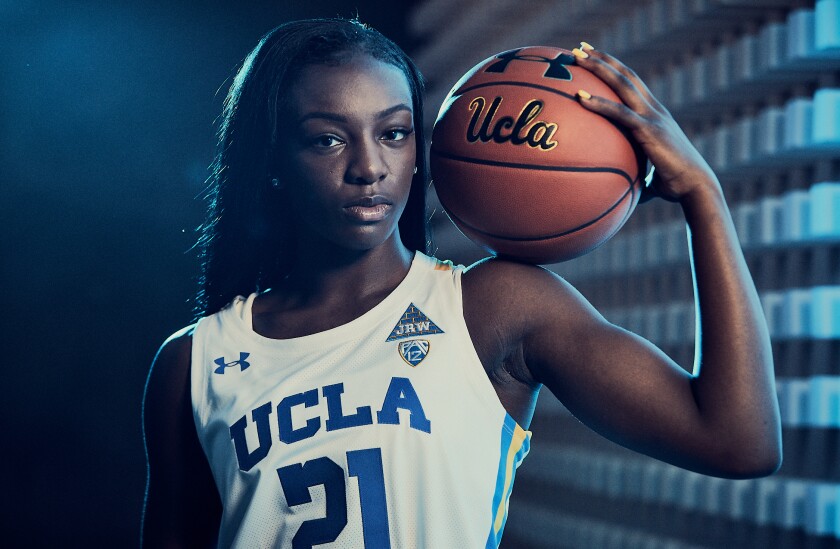 Michaela Onyenwere stood in front of her friends and family in a patterned dress. Her hands were folded behind her back as she stood next to her father. Peter Onyenwere, wearing a long white jacket and matching wide-brimmed hat, held a medal in his hand as he spoke into a microphone. The medal, the very first one he won as a sprinter for Nigeria, was to be given to his only daughter as she started college.

“I’m passing the mantle to her,” said Peter, who bequeathed his gold medal from the 1979 Imo State sports festival held in Owerri, Nigeria.

Onyenwere is now chasing her own medal on the international stage. The UCLA junior hopes to represent her country in Tokyo as a member of Team USA’s inaugural 3x3 Olympic basketball team.

While the United States has yet to officially qualify for the 2020 Olympic Games in 3x3 — both the men’s and women’s teams need to finish in the top three of their respective qualifying tournaments in March — Onyenwere is a “strong contender” for a spot on the final four-person roster, said Carol Callan, the women’s national team director for Team USA.

Onwenyere was one of six college players who participated in the FIBA 3x3 World Series last summer, an experience that could help position her for the Olympic team. She showed her quick first step, instinctive rebounding skill and ability to guard out to the perimeter, all skills she displays while starring for the No. 10 UCLA women’s basketball team that opens Pac-12 play Sunday against USC at Pauley Pavilion

The Bruins, winners of their first 11 games, can tie the best start in school history with a win. Onyenwere — pronounced Own-yen-wed-ay — leads the team in scoring (19.7 points per game) and is tied for the lead in rebounding (7.5 per game). After becoming only the fourth player in UCLA history to score 600 points in a season in 2018-2019, Onyenwere is now the 24th Bruin to register 1,000 points and 500 rebounds in a career.

“Honestly,” freshman guard Charisma Osborne said, “she can literally do everything.”

Onyenwere’s versatility on offense and her dedication to defense makes her an almost ideal candidate for international 3x3 basketball. Callan, who will help determine the roster for the Olympic team if the United States qualifies, said Team USA’s experience in the World Series over the summer showed that a prototypical 3x3 player is mobile, has size and can score in many ways.

The 6-foot Onyenwere can stand to increase her long-range shooting — just nine for 29 from three-point range at UCLA this season — Callan said, but the junior forward “checks the rest of the boxes very well.”

Callan observed Onyenwere for Team USA in two respects over the summer as the 20-year-old balanced her 3x3 competitions with five-on-five in the Pan American Games in Lima, Peru. During the five-game, silver-medal-winning run, Onyenwere averaged 10 points and a team-high 7.8 rebounds. Her family made the trip and Peter watched games dressed either head to toe in UCLA’s blue and gold or red, white and blue for the United States.

“To have parents who immigrated here and just to represent this country that kind of embraced them is just really humbling for me,” Onyenwere said. “I never take it for granted.”

Onyenwere sometimes heard stories about her father’s track experiences. It never seemed real that she could soon have stories of her own to tell, especially with the way the U.S. women’s team, which has won six consecutive Olympic gold medals, dominates with established WNBA stars. The debut of 3x3, which was accepted for the 2020 Olympics in 2017, “opened that door for me,” she said.

For an athlete, the Olympic experience is the “pinnacle for a career,” Peter said.

“In that moment, to run on the world stage, it is so powerful,” said Peter, who specialized in the 100-meter dash and competed in college at Missouri. “Representing your country as an ambassador, it is so powerful.”

At first, Onyenwere continued the family tradition of track. In middle school, she tried swimming, volleyball, track and basketball. The Aurora, Colo., native had never even picked up a basketball. To her father, she was a decathlete-type talent who could excel in every discipline, but after Grandview High lost in the semifinals of the Class 5A girls basketball semifinals during her freshman year, she realized just how much she loved the sport she had taken up only a short time earlier.

She began working with private coaches as recruiting letters poured in. The wave was so strong that her mother, Edith, started sorting her mail. She was a late bloomer, starting basketball at only 11 or 12 years old, but blossomed into a three-time Colorado Gatorade player of the year and won a state title as a senior.

But when UCLA coach Cori Close hit the recruiting trail and saw Onyenwere in a tournament in Atlanta, the then-rising junior didn’t impress the coach with her skills. In fact, Close thought Onyenwere was more of “a track athlete running around and sometimes touching a basketball.” She couldn’t shoot outside of eight feet, didn’t have great ballhandling skills and didn’t fully grasp the game.

But she played harder than every other player on both teams for three days in a row.

Close had to get her.

Close marvels at Onyenwere’s skills now. She has a consistent midrange shot. She can maneuver around defenders in the low post with an array of moves. Her three-point shooting needs to improve to reach the international line, but is getting stronger.

The coaching staff tried to hide her on defense last season, but 3x3 forced her to be a better defender, Onyenwere said. In the free-flowing, open space of the half-court game, there’s no help and no choice but to be a stout one-on-one defender.

After barely watching the sport at all as a freshman, Onyenwere now watches it constantly. She streams games on her phone then bursts into the coaches’ offices, asking if they watched the latest great performance from around the country.

“It’s maybe the biggest change of a kid who I recruited versus. the kid that I coach in my 26 years,” Close said of Onyenwere’s increased interest in the sport.

By simply watching the game more and increasing her international experience, Onyenwere’s basketball IQ has skyrocketed. During a recent practice, Onyenwere huddled with freshman Brynn Masikewich on the court during a break in a scrimmage to explain the nuances of that week’s scouting report.

“She couldn’t remember any plays her freshman year,” Close said, “and now she’s teaching them and she’s playing three positions.”

Two years ago as a freshman, Onyenwere thought she was coming to UCLA to simply further her education. She didn’t hold a childhood dream of becoming a professional basketball player. She wanted to become a dentist.

Now Onyenwere is an all-conference player on the cusp of national attention. She was named to the preseason watch lists for the John R. Wooden Award and the Naismith Trophy. She saw teammates Jordin Canada, Monique Billings and Kennedy Burke get drafted into the WNBA and may be one of the next Bruins to join them. She’s just starting to realize all the places basketball can take her.

Onyenwere traveled to Russia, Canada and Peru for tournaments last summer. To add Tokyo to her destination list next year, the United States has to finish in the top three of a qualifying tournament in March. Onyenwere and many other college athletes who participated in previous 3x3 tournaments won’t be available because of potential NCAA tournament runs, but if Team USA survives, the national championships in April will also serve as the Olympic trials. There, a selection committee will put together a final roster of four players with two replacements for Tokyo while considering a point system that rewards 3x3 experience.

Players earn points by participating in FIBA-sponsored events like Onyenwere did during the 3x3 World Series. Two of the four players on the final roster and the two replacement players must be among the top 10 individual point earners for their country. The other two roster spots can go to any players who meet a FIBA-specified minimum amount of points.

Points are earned in up to nine events during a 12-month period and awarded based on each event’s importance in the competition network, the team’s results and a player’s individual stats. According to the FIBA 3x3 website, Connecticut’s Christyn Williams leads the United States with 289,750 points. Onyenwere is fourth with 206,600 behind Oregon State’s Aleah Goodman and Princeton’s Bella Alarie.

From passing his medal to his daughter to watching her win her own to recognizing how close she is to fulfilling an Olympic dream, Peter Onyenwere is overwhelmed. An agricultural engineer, he believes he is the luckiest of all U.S. immigrants. To see his daughter develop so quickly in basketball, earn a Division I scholarship and attend UCLA? And now, to see her on the cusp of playing for her country, he is almost breathless.