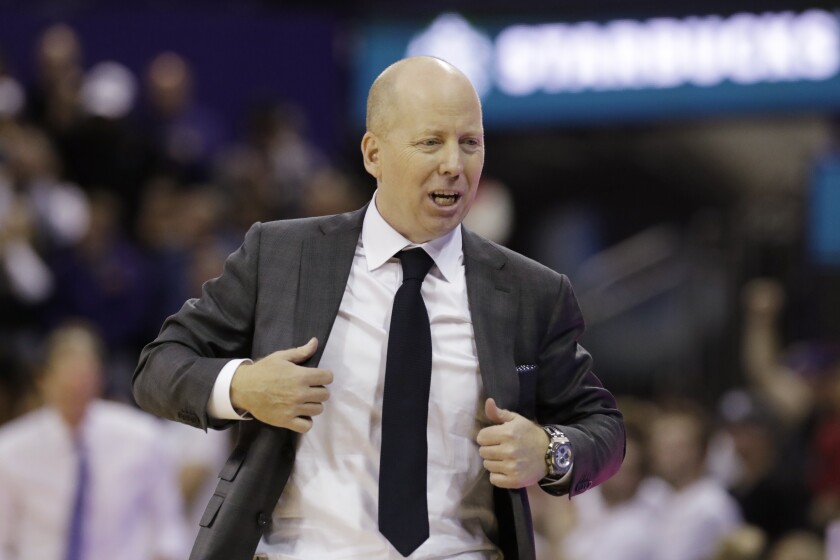 Mick Cronin said he could chew food again. He could talk to the family he had been forced to neglect over the holidays. He could sleep more than two hours a night.

He had finally emerged from his first ordeal as UCLA’s coach. After three consecutive losses and nearly a month of unease, Cronin’s players entered a new year and maybe a new era. They embraced his message about what it would take to become the sort of scrappy team that could win despite its many shortcomings.

It required physically draining practices and bloodied limbs and unconventional methods, Cronin refusing to allow players or coaches to wear tank tops or shorts bearing the UCLA logo after the team had bottomed out with a home loss to Cal State Fullerton on Dec. 28.

“We didn’t deserve them,” Cronin said late Thursday night. “I just didn’t feel we were competing to honor the jersey the way we need to compete. You have to honor who you are and the guys who played before you. You’ve got to give everything you’ve got. Kareem [Abdul-Jabbar] is not in that locker room, but he shouldn’t be sitting at home watching guys not give everything they’ve got.”

The way the Bruins responded, with scuffed bodies and hardened psyches and fearless precision, pleased their coach well before they completed a stunning 66-64 victory over Washington in their Pac-12 Conference opener at Alaska Airlines Arena. Even if freshman guard Jake Kyman’s go-ahead three-pointer with eight seconds left had been off the mark, Cronin said, he would have considered the outcome a success.

UCLA had already prevailed because it competed.

“You win because you grind out wins,” Cronin said, “so I was really proud of them today no matter what the result would have been at the end.”

Now, the Bruins (8-6, 1-0 Pac-12) can further gratify their coach Saturday afternoon at Beasley Coliseum with more plucky play against Washington State (9-5, 0-1), another team trying to find its way under a first-year coach.

The trip already felt like a success after Cronin emerged from a jubilant locker room Thursday night, his players dousing Kyman with water and leaping in unison while unleashing hearty roars. Cronin went from issuing apologies days earlier to accepting congratulations from school athletic officials who accompanied the team to the Pacific Northwest.

Cronin contributed to his first significant triumph at UCLA by calling a timeout after Kyman’s go-ahead three-pointer to set up his defense for Washington’s final possession. He inserted speedy sophomore guard Jules Bernard to help prevent the Huskies from driving unabated toward the rim and things unfolded as if Cronin had diagrammed the last seconds on a whiteboard. Bernard stepped in front of Washington’s Nahziah Carter, who lost the ball while dribbling on the perimeter.

Cronin’s team was ready for this moment too, having completed loose-ball drills in practice Sunday. Junior guard Chris Smith reacted instinctively when the ball appeared in his vicinity.

“I saw it bouncing,” Smith said, “and there was only one thing to do, just dive on it.”

Smith forced a jump ball that went back to the Bruins on the alternating possession with 1.1 seconds left, and soon they were celebrating the end of their lengthy funk. Kyman made seven three-pointers and finished with 21 points, eclipsing his previous season totals of four three-pointers and 18 points while giving his team the sharpshooter it sorely needed.

“I tell him two words all the time: keep shooting,” Smith said. “Every time he’s open, I’m going to kick it to him and just be ready to shoot because that’s his job.”

Roles continue to be defined and rotations refined as the Bruins approach the midpoint of Cronin’s first season. And the coach could finally exhale after using his voice to remind his players just how much better they need to become.

“My message, the things I told them and said to them, I hope humbled them,” Cronin said. “Sometimes the truth hurts. People think sometimes I’m intense or I’m the big bad wolf. You’ve got to tell guys the truth, man. The truth will set you free. You can get back to work and start grinding and trying to make yourself a player instead of just thinking you’re a player because somebody told you you’re really good or somebody who lives in his mom’s basement gave you four stars.”

Update: The Bruins went with four guards against the Huskies but may want to go big against the Cougars, who appear susceptible to interior brawn. USC freshman forward Onyeka Okongwu overpowered Washington State while collecting 27 points, 12 rebounds and two blocked shots Thursday during the Trojans’ 65-56 victory.