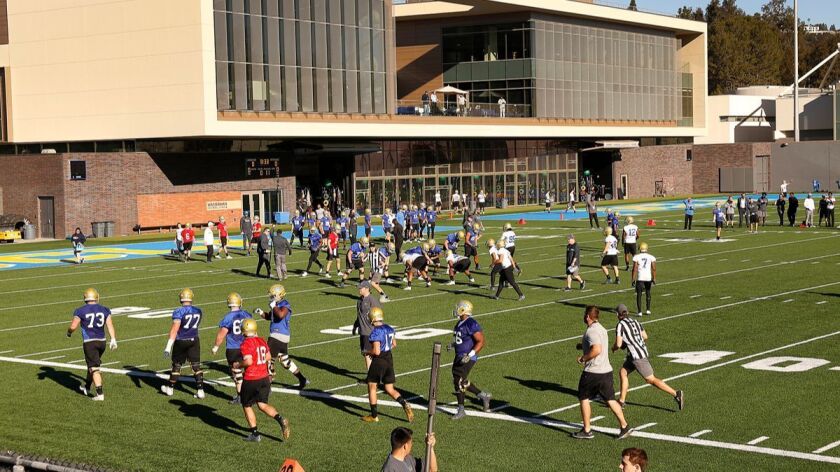 UCLA coach Chip Kelly has gone old-school in recruiting, relying on a handful of junior college players to salvage his latest class.

The last three players to give the Bruins nonbinding oral commitments have come from the junior college ranks, including one of the nation’s most prolific running backs at that level.

Rachaad White, the Mt. San Antonio College standout who leads all junior college players with 130.2 yards rushing per game, became the third junior college player to say he would play for the Bruins next season, joining linebackers Caleb Johnson of Fullerton College and Mitchell Agude of Riverside City College.

White’s commitment triggered a “BOOM!” on Twitter on Sunday from Ethan Young, UCLA’s director of player personnel, as well as snickers from those who noted that White’s other offers reportedly came from Arkansas Pine Bluff, Stephen F. Austin and Texas El Paso.

The trio of junior college players has nudged UCLA’s ranking for its 2020 recruiting class to No. 53 nationally, according to 247Sports, up from No. 76 less than two weeks ago.

Kelly said an influx of junior college players isn’t meant to help compensate for having one of the youngest rosters in the nation; it’s just adding players who can immediately fill holes.

“It has nothing to do with youth,” Kelly said. “You could be a senior-laden team and if you’re missing a center and there’s a good juco center out there, then you will get a center. … What you’re always looking for is, can someone make us better?”

The Bruins have dipped into the junior college market since Kelly’s arrival for a handful of contributors, including receiver Jaylen Erwin and linebackers Tyree Thompson and Je’Vari Anderson. Erwin is tied for second on the team with 242 yards receiving and Thompson was a starter last season who underwent foot surgery in August, sidelining him indefinitely.

Kelly said his top requirements for junior college prospects are academic eligibility and the ability to contribute immediately. Unlike high school players, unrealized upside does not rank high on Kelly’s list of desirable attributes.

“You don’t have time with a juco player to say, ‘Hey, we’re going to redshirt him and then we’re going to develop him,’ ” Kelly said. “They’ve got to be able to play right away.”

Stanford coach David Shaw comforted some UCLA fans after the Cardinal escaped with a 49-42 victory over the Bruins last season, saying he foresaw the matchup as the future of the Pac-12 Conference championship.

Eleven months later, UCLA and Stanford will meet again in a battle of one-win and .500 teams.

The Bruins (1-5 overall, 1-2 Pac-12), hoping for an upward trajectory in Year 2 under Kelly, have regressed. The Cardinal (3-3, 2-2) are on pace for what could be one of their worst seasons under Shaw, who has never lost more than five games in his current post.

Both teams could start backup quarterbacks Thursday at Stanford Stadium after the Cardinal announced that K.J. Costello was out because of an injured hand. Stanford may have to go with third-stringer Jack West because backup Davis Mills is questionable because of a calf injury that knocked him out of the Cardinal’s upset victory over then-No. 15 Washington on Oct. 5.

It was unclear whether UCLA would start Dorian Thompson-Robinson or Austin Burton, the understudy who played admirably against Oregon State this month while Thompson-Robinson was sidelined by a leg injury. Thompson-Robinson returned to practice this week, but Kelly remained mum on the starter against the Cardinal.

In what may be a bad sign for the Bruins, Stanford reverted to its old physical ways against Washington. The Cardinal used a punishing rushing attack that featured Cameron Scarlett, who ran for a career-high 157 yards and a touchdown.

“They’re not as much smash-mouth as they probably were with [Bryce] Love and [Christian] McCaffrey,” Kelly said, referencing two departed tailbacks, “but they can still run it.”