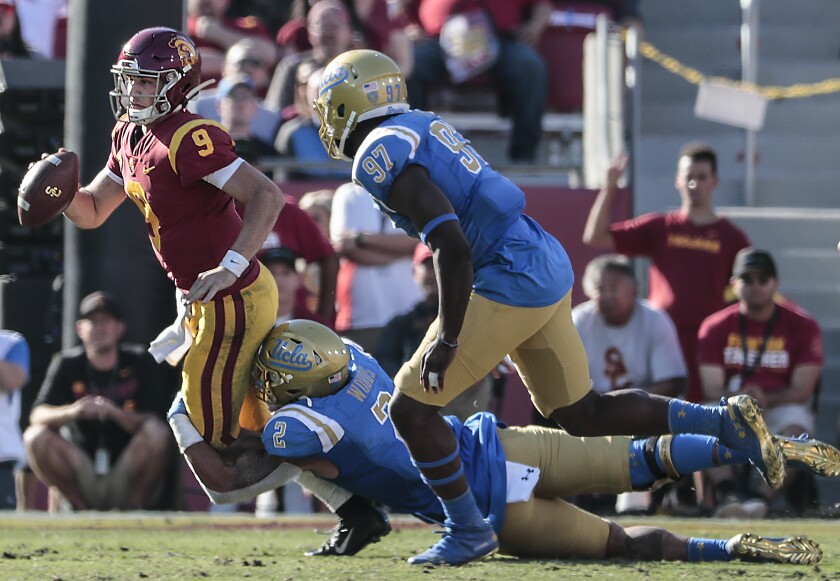 UCLA coach Chip Kelly has apparently absolved one group of responsibility for a defense that has given up 101 points and 1,179 yards over its last two games.

“I think our staff’s done a good job considering what we have right now,” Kelly said Saturday after the Bruins’ latest defensive collapse, “but it’s not an excuse — we have to win games and that’s what the bottom line is, so that’s kind of where we are in this whole situation.”

His opinion is probably not a popular one among fans, who weren’t exactly stumping on social media for defensive coordinator Jerry Azzinaro to return in 2020 after the Bruins gave up 643 yards during a 52-35 loss to No. 23 USC at the Coliseum.

In something of a recurring theme, UCLA missed tackles and blew assignments for much of the game. The defense even committed two penalties on the same play in the fourth quarter when lineman Otito Ogbonnia jumped offside and cornerback Darnay Holmes committed pass interference in the end zone.

When the Coliseum lights went out in the fourth quarter, the metaphors were there for the taking for a defense that had extinguished the Bruins’ bowl hopes. Kedon Slovis set a USC record with 515 yards passing and the Trojans set a school record with four receivers topping 100 yards.

“They have weapons all over the field,” UCLA defensive back Elisha Guidry said.

The Bruins countered with weaknesses in a multitude of spots, something that Kelly pinned on a rash of injuries. Defensive lineman Odua Isibor, and linebackers Krys Barnes and Lokeni Toailoa departed because of injuries.

“I think you’ve got to play with what you’ve got and right now we’re banged up a little bit on that side of the ball,” Kelly said, “but I thought our guys played with great effort.”

Although it seemed as if the Bruins scored enough points to win, Kelly refused to single out the defense for criticism.

“We’re a team, we don’t blame one side of the ball or one facet of anything else,” Kelly said. “I think we stick together as a group and that’s what we’ll always do. It’s offense, defense and special teams that make us up, it’s not just one side of the ball. I think when you get into that, you start finger-pointing and that’s not what we’re all about. We were down some players and we’ve just got to rally, that’s the bottom line.”

A victory for UCLA

Ink is thicker than blood.

“It was definitely more friendly this year than it’s been in the last couple of years,” Ryan Smith, the football beat writer for the Daily Bruin, said after the UCLA students prevailed 9-6 on Friday night, ending at two games a losing streak in the series.

Samuel In, an assistant video producer for the Daily Bruin, starred with three interceptions and Sam Connon, the paper’s sports editor, threw nine touchdown passes during the game in which each touchdown counted for one point.

Of course, this being Bruins versus Trojans, there were limits to the congeniality.

“They were getting upset with our dink and dunk kind of style,” Connon said, “because they were airing it out the whole time.”